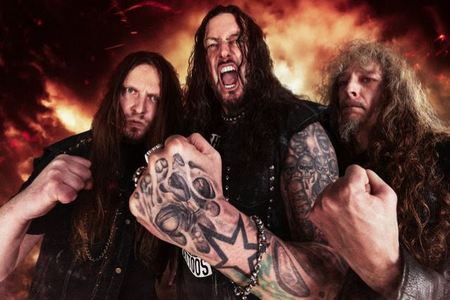 In the early days of thrash during the 1980’s, two distinct countries emerged as pioneers: America and Germany. Developing a thirst for fast riffs and aggressive tempos as well as speedy words that often pointed out a lot of societal/ government wrong doings, this scribe as a teenager couldn’t wait to discover another band to satiate that metal appetite. Destruction would be one of those bands to fill that need- as records like Infernal Overkill, Eternal Devastation, and Release from Agony crushed bodies and skulls, uncompromising in their will to win over a burgeoning underground following worldwide.

Although the 1990’s were not kind to the band (bassist/vocalist Schmier leaving at the start, and who remembers 1998’s The Least Successful Human Cannonball?), in 2000 literally All Hell Breaks Loose was the monumental reminder that Schmier would return and that all would be right in Destruction’s second phase of their career. So much so that we are now onto the 14th studio album, Under Attack – a fitting effort to prove to pundits that the band keeps striving for creative ways to remain relevant on all fronts musically and lyrically.

Having met in person years before, Schmier may be subdued at the time of this talk recovering from a cold he got while touring Russia, but it doesn’t diminish any of the topics at hand in his conversation. Prepare to find out more about wild tour situations in Mexico and Russia, internet haters, differences in the 1980’s versus current support for the band, and thoughts on the upcoming American presidential election.

Dead Rhetoric: Under Attack is quite an appropriate album title for Destruction – considering the events that take place for the band touring the globe. How are you able to handle all the wild events from promoters pulling guns and holding guitars for ransom in Mexico to people stealing your stage scrims in Russia without going insane? The music must be the right outlet to rage, vent, and also release, correct?

Schmier: Yes, of course. Sometimes you just feel like giving up, you know? It feels like the whole world is against you. On the other hand, we have a lot of amazing experiences and it’s a great gift to tour the world, to have so many shows all over the planet. With the music we can get a lot of stuff out, I can write a lot of my experiences in the lyrics. A lot of the stuff is about the touring experience, the stuff that we see. When we were in Russia for five days, we talked to the people and I heard a lot of opinions and interesting things about how things work in Russia, also for the metal scene. A lot of shows have been cancelled lately because of the church taking over the power. Stuff like Mexico, that was something where I thought about maybe I should stop doing this. That was scary, stuff being stolen is something that you can’t avoid. People are stealing everywhere, we’ve had guitars stolen before. It sucks to steal from bands because bands are usually not rich, but what can you do?

Dead Rhetoric: You changed up the studio recording situation for this record – this long into your career, is it important to keep pushing forward not only in terms of fresh ideas but fresh approaches in terms of a comfortable environment for the best final output?

Schmier: Exactly, that’s exactly the case. I think it’s very dangerous to do the same procedure every year, you get into this kind of routine and in art that’s very dangerous, because then you don’t get inspired and it becomes a routine job. We wanted to change everything, the environment, the producers, the way of recording – it was recorded in a different studio because we didn’t use any samples, it’s all real drums. It was important for us because I think the new record sounds much fresher and inspired. We had a little bit more time this time, almost every year we’ve had an album out in between best of albums, live records, and DVD’s – so we’ve been pushing ourselves hard so it felt good to have a little bit more time and change some stuff. As you hear on the album, it’s a strong release this time.

Dead Rhetoric: At this point in your career, do you have a preference on studio versus stage activities?

Schmier: I like both. When we were young, we were scared to go into the studio. Like going to school, or having a test at school, we were worried about having to be good. Nowadays recording is exciting because we know how it works and we’ve been doing it so much that I look forward to it. That was not always the case. The live show is the essence of our music in general. We love thrash, we love the excitement, that’s the stuff I love the most about the band, to tour and see the world, having every night 100 minutes of full power and energy. It’s a mixture of a cardio workout and letting your aggressions out. I love it – when I don’t tour I go crazy. We usually play every month, even when we were recording the album we did all these shows in between to stay fit and keep the connection with the fans.

Dead Rhetoric: What would surprise us to learn about Mike the riff master and his one-of-a-kind thrash abilities?

Schmier: What would surprise us? Mike is the total opposite of me- he’s like a hermit. He likes to sit home and play guitar, he likes video games. He reads a lot of books, he reads a lot of heavy literature. He likes Spongebob! (laughs)

Dead Rhetoric: In a previous interview I did with Mike, he describes you as angry but pretty sophisticated when it comes to your lyrics. How do you remain relevant in your topics without repeating yourself – considering all the material you’ve covered in Destruction?

Schmier: It’s not possible to not repeat yourself. In general, it just depends on the topics that I pick up. I write my lyrics very spontaneously, when I see something that pisses me off I sit down and see if I’ve got a connection with it right away, I keep on writing. On this new album there is definitely some stuff that is different. “Under Attack” is dealing with the French terrorist attacks. “Second to None” is dealing with the haters on the internet, “Getting Used to the Evil” is dealing with the fact that we are all getting used to the brutality in life. It’s kind of normal now to see people dying on television now, that’s scary for me. Humans have that gene that makes things normal, and that is scary for me to see us going that way. A song like “Elegant Pigs” is talking about nowadays bands that are cheating live with backing tracks, or playbacks live- I’m talking about metal bands. I thought I would never have to say this, that is kind of disappointing. For me the spirit of rock ‘n’ roll is about being live and real, nowadays you see a lot of bands cheating with the fans when it comes to backing tracks, the whole vocals coming from tape. That’s a sad fact, so it inspires me to write about that topic.

Dead Rhetoric: “Second to None” contains your views on Internet hate and the various scams that exist online. Is some of the content based on personal experience, and do you believe that as much as ‘social media’ is supposed to bring humans closer, in some respects its brought us further and further apart?

Schmier: Yeah. Of course the fact that people are anonymous on the Internet, they can do whatever they want. That fact makes the biggest cowards, the biggest mouths, and the biggest speakers on the net. Of course everybody has their own experiences, I have stalkers, we have haters as every band has haters and you have to deal with that. My girlfriend as an example got a lot of dirty mail when we announced we were together, just from some idiots. That’s a sad fact, and as much as I’d like to ignore it’s something you have to face when you go on the internet, you know? It was important for me to scream it out, in my opinion it’s like everybody says- it’s envy that makes people write shit like this. It was fun to see the reaction, to see people’s reaction on our lyric video, some people believe Internet bullying does not exist. The Internet never forgets, it will always stay out there- the people that you insult and aggress against, they will never forget. In the end, when I see how many people have responded to our video- on our YouTube video we have 150 dislikes on 55,000 views, so it shows also that not so many people are doing this. I see the same negative people posting on Blabbermouth, on YouTube and other forums.

Dead Rhetoric: It can be frustrating for me to look at, because if you spend so much time hating things, you could take that and put it in another direction…

Schmier: Exactly. It’s the metal community, it’s like the underground we should be supporting each other instead of killing each other with words. It’s a new trend at the moment, and nothing you can do about it but I chose to write a song about it. I knew the haters would hate it of course.

Dead Rhetoric: Tell us a bit more about the cover art from Hungarian artist Gyula – as there seems to be a lot of deeper symbolism with the missiles and aircraft surrounding the fire and explosions?

Schmier: I had this idea of the Destruction skull as an exploding Earth, or an exploding planet. Now, the way the world goes at the moment, maybe it wasn’t the best idea- but I just can’t put flowers on the cover to distract people. The world is going to hell at the moment, and using the symbolism is a way that fits perfect in the lyrics. The show must go on, if you stop doing things than the other people will win. It’s important for us to still go on and open our mouths.

Dead Rhetoric: What convinced you most to sign with SPV back in the day – as I’d imagine that there was also interest from German label Noise at the time? And how do you feel about being on one of the biggest labels for metal today in Nuclear Blast for so long?

Schmier: SPV was just starting, us and Sodom were like some of the first releases that came out. We had some other offers, but SPV seemed the most interesting to us at the time. They liked the outfit of the band, the way we put the music together with the look, that was something that impressed us because they were looking deeper into the band and not just at the music. For us that was a good time to sign, they worked good for us. In the long run, we signed a very bad contract. If I look back now, I would do some stuff differently with the knowledge I have now. Of course, a lot of bands have been through that.

With Nuclear Blast, this is the best thing that has ever happened to Destruction. We’ve been with Nuclear Blast in the beginning of the 2000’s, we switched labels for a few years and we’ve been back with Nuclear Blast for four years. I don’t want to go to another label ever again, they work best for me because they understand what we do, the boss is a cool guy. It’s a real metal label, it’s not just people sitting in an office and selling your stuff. They have the spirit of the music and that makes a big difference I think.