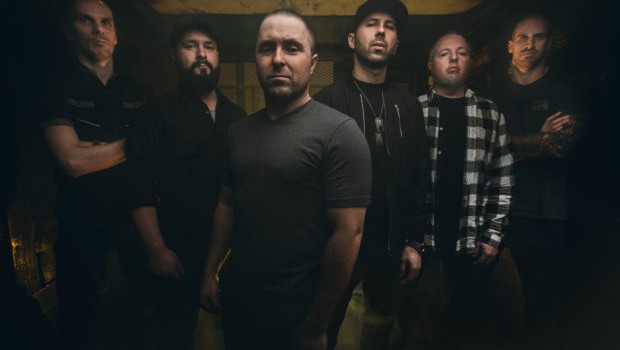 Dead Rhetoric: I was actually going to ask how you were going to balance Despised Icon and Obey the Brave…

Erian: Despised…my boys are family men. They all try to balance family obligations, work obligations, and the tour life. We are back, but on our own terms. For the time being, and for the close future, we aren’t going to be a full touring band. We are working on a world tour – we just did Europe for three weeks. We are doing some summer festivals – we are going to be at Heavy Montreal in August. September comes and we are going back to Japan. Then in October, and we are going back to America on a killer tour. We are just doing a portion of that one, but it’s going to be fucking sick and I’m looking forward to it! Next year we already have plans for Australia and Latin America. It will take us a little longer than usual, but we will make it your way and that’s something that is important to us.

That gives me plenty of time to do Obey the Brave and do it correctly. My boys want to tour. This year was a slow year. We’ve been a band for four years, and the first three years were extremely busy. We toured worldwide two times in three years. This last year we took a bit of a break because we needed time to chill out and relax. We wanted to make sure our third record would be the best thing we could possibly write and put out. We spent quadruple the time we normally spend on a record. We wrote a bunch of songs and scrapped a bunch of songs. We went to Florida and produced the album with Tom Denney from A Day to Remember, and we really took our sweet time. We wanted to make sure we did it right because we want this next record to bring us to the next level. Also, John [Campbell] became a dad and he wanted to spend some time with his kid. It was a good time to bring Despised back. Once things cool down for Despised, it will be OtB’s turn. So far I’m making it work, but I’m not going to lie, some days it’s fucking complicated [laughs].

Dead Rhetoric: Could you explain the connection between the album title/lyrics and the relationship to the band?

Erian: This is always the clumsy part of the interview where I’m so bad at openly discussing the themes and lyrics, because I feel like it’s easy to just write them in the song and put them in there. It’s easier to do that than talking to your parents or your girlfriend and saying “my head’s in the wrong spot” and trying to open up. It’s my self-therapy in a sense – my way of keeping my head above water and dealing with all these obstacles and all the negativity in my live and choosing a positive outlet to let it out, which is music. There’s that catharsis, and I’m thankful to have music in my life or else I would fall into self-destruct mode. The lyrics are very introspective. There are bands out there that do the social/political thing and they do a great job of that, but as far as I’m concerned, I’d like to talk about moods. It sounds cliché, but it’s very helpful for me personally, and I’ve met people along the way that can relate to what I write/sing, and it’s odd but people go through similar shit. Ultimately, as much as writing this music is my way of letting go of things, for a lot of people, singing the music live and moving around a bit is their way of letting go. That’s why I am extremely thankful to be in this position and have people that support me in everything I do. Much love to the fans.

As far as Beast itself, it’s not that poetic – it’s very straight-forward, with some metaphors here and there. Beast would be the metaphor for the band – the resurgence of the band. The band slowly resurfaces and witnesses how things have changed. A lot of us are uncomfortable with change, so the record deals with that.

Dead Rhetoric: Obviously you have still been involved with music and the industry, but how do you feel the industry has changed since you called it quits six-seven years ago?

Erian: With social media and the pivotal role that Internet plays in everyone’s lifestyle – I am just looking back and just being a student in the ‘90s and beginning of 2000s and going in the library to do research. Google wasn’t a thing. Back then I would call someone’s place on a landline, or someone would call and you wouldn’t know who. You would just hang out. Things have drastically changed, and things move a lot faster than they used to. When we started Despised back in 2002, I barely used email back then. Mp3.com and Myspace weren’t a thing. Me being older now, and people at the concerts being younger, I feel there’s that gap in what is relevant and what is going on – what is popular culturally. I feel like I identify less and less with what’s going on and become more and more disconnected. I’m not trying to be “that guy,” saying everything sucks. I just like having a couple of friends, my girlfriend – the family thing. I use social media because it’s important to give back to the fans and communicate with them, but part of me just wants to grab my phone and throw it as far as I can. But enough about that, let’s focus on the good shit.

Dead Rhetoric: It’s okay, I’m 35 myself, so I totally understand where you are coming from…

Erian: The thing I recently learned about – because video games are next level now. It has nothing to do with regular Nintendo or Sega Genesis when you and I were kids. Now it’s top of the line stuff, and there’s this thing where people record themselves playing video games and people can watch it. There’s nothing wrong with that – I’m not complaining, but wow that’s a thing. That’s peculiar, but to each their own – if that’s your thing, then do it. Little things like that add up, and then I’m like, what planet am I on?

Dead Rhetoric: So what made you decide to sign with Nuclear Blast?

Erian: Originally we wanted to do things independently. Managing this band on our own, Eric [Jarrin] and myself, we would do everything on our own and then we realized how much work it would be. We decided to let go a little bit and not be blinded by the business and keep it fun. Have more time to focus on what’s important, which was the music. So we decided to let go of that idea, so we approached one label, and that was Nuclear Blast. They are independent, and they are our favorite label. On the roster they have Slayer, Hatebreed, and Meshuggah, that have influenced us early on, and other bands like Carnifex and Thy Art is Murder, which are our touring buddies. Oh wait, Suffocation! Touring buddies and one of the most influential death metal bands in the world.

We are labelmates with all those dudes – it’s weird but it’s a compliment and a driving/motivating factor in our band. We approached them and they said let’s do it. Oddly enough it was that easy. That being said, we were a band for 10 years prior to that, so it’s not like it just fell into our lap. But I’m extremely happy to be working with them. They are very artist friendly and supportive of us, not just as musicians but as people. They keep it casual – it’s not just cold and business-like all the time. We have plenty of time to joke around, and I couldn’t be happier.