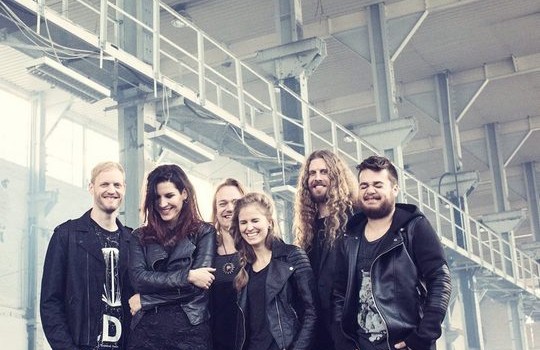 Dead Rhetoric: How important of a role has video and the visual medium in terms of cover art played in Delain’s appeal? Are you conscious of setting a high standard each and every time out?

Westerholt: Yes, and I think we’ve failed miserably a couple of times. (laughs). More than ever I am into that, I’d rather not release a video, or we have to do this the right way. Our music has the danger of becoming really cheesy if you do things the wrong way. We really have to watch out. I think the last year we’ve managed a standard – “Suckerpunch” I really like the video, the new video that we’ve done I really like. It’s a budget issue as well of course, are we willing to spending $15,000-$20,000 on a video? Videos are more and more a throwaway product and they are expensive, but on the other hand you really need them for presence on YouTube and online, it’s a promo tool and very needed. But I want to be original with that- I don’t want to have the same kind of video that another band has. We are getting more and more focused on that.

Dead Rhetoric: Where do you see the growth of the band from the early days to now – and how do you define success today?

Westerholt: I think it’s a matter of keeping going, being very critical at what you are doing, and try to evolve and develop. Be hungry for that and try to challenge yourself- I think that’s part of the success and the other part is keep playing, which is also part of the growth that you need. Another part is our loyal fanbase, which is serving them. This is my job, I do this for a living, and they are my boss. There is a reason why we released an EP earlier this year, because the fans were asking for new material and we knew it was taking a lot of time. They were right, we should release something- we weren’t ready with the album, but we can release some material and it can be a warmup to the album. I think all these things together make a success. In the end it’s up to the fans if they decide if this works or not.

Dead Rhetoric: How do you assess the strengths and skill sets that each member of Delain possess?

Westerholt: I think as the live product goes, we are all very different personalities. Merel our guitarist is a very noticeable person, Otto the bassist is the big metal guy, Timo is like a guitar champ, he’s so good at guitar playing. Ruben is very musical in his drumming, sometimes he surprises me even now with fills on the older songs. Everybody has their strengths- also behind the scenes, some are good at organizing. Otto handles our merchandising and he’s really good at that. I have my skills, and the overall theme of being a manager. Charlotte is very creative and very strong on the online scene. Everybody has their qualities and you should make use of that and give people the freedom to develop that. That keeps things motivated and keeps a very healthy culture within the band.

Dead Rhetoric: You are coming up on the 10th anniversary of Delain – which you will celebrate with a special show. Any particular details that you can reveal regarding what can possibly come up – and will this be recorded for a DVD/Blu-Ray release for those who cannot attend in person?

Westerholt: Yes to everything actually. Another thing is the fans have requested a DVD release for a very long time, so it was about time and this is the perfect moment at the 10-year anniversary. It’s a very special venue (Paradiso), a lot of history’s biggest artists have played there- Nirvana, The Police, Prince have all played there. It’s an old church that has a very special vibe, and this show we are inviting guests who have performed on our albums. Some are confirmed already, we will have special effects- it will be the biggest and most magical show that we have delivered so far. We will record it, and together with the fans make a magical moment out of this.

Dead Rhetoric: Are your families proud and supportive of your endeavors? And how do you handle the grind of the music business while also trying to have some sort of normalcy during the quieter times?

Westerholt: Ah yes, the family is proud. Sometimes I do feel that my family can be spoiled, because my brother being active in Within Temptation- they had moments where they took for granted what I did, and I think it’s very unique what we both do. My dad helps me a lot with the whole company side of Delain, that’s really great. I’m really, really happy with that.

I experience no quiet times with Delain. I compare things to being on a farm – there’s always work to be done. Being a creative person, as a musician, you have to be creative on the whole company side of things as well. When we tour the states for example we involve our fans in saving costs and supporting us. We asked a fan to drive us on our last tour with Nightwish for example, and Ken is a big hero to us as he drove us around the United States, he is fantastic. Another example is we have a fan who helps us store all of our equipment, our US equipment- so our drum kit, our lights and stuff can stay at his place – he helps us get it to our first show and he takes it back at our last show. We want him around as well as he is a part of the family. That’s a very strong trait of Delain – to be able to pull things off when it seems like you cannot pull things off. Another example of that is the band Sabaton – I know they are really creative with these kind of things like we are – it’s part of their success.

Dead Rhetoric: Sting is one of your musical idols – what moments strike you most from his prolific career in The Police and as a solo artist, and have you ever had the opportunity to take in any shows with Sting throughout his career?

Westerholt: I saw a show of Sting two years ago in the Netherlands. What I found so awesome about him is he is very down to earth and is also very politically active. He was not a typical sex, drugs, and rock and roll type of person, I think he leads a very healthy life. He is very professional in creating his whole career and I just love watching him play. He’s still around and that’s fantastic. I have never had the honor of meeting him.

Dead Rhetoric: You mentioned in another interview I saw online that if you weren’t a musician, you would probably be a history teacher. Where would you like to go if you had the ability to go back in time and experience a particular time period of history?

Westerholt: Oh, there are a lot of different time periods I would like to go, in good times and in terrible times. It’s fascinating to see how people would cope. I would love to go see how things were in the Napoleonic times during the French Revolution, I’m very interested in the US Civil War- how Lincoln tried to glue the country together again. American history I’m very interested in, but also European history- Spain through the times of Philip II and Charles V- also England, the War of the Roses. A lot of periods, Roman times, classical times. I would like to be everywhere actually!

Dead Rhetoric: What’s on tap for Delain over the rest of 2016 and early 2017 once the album comes out?

Westerholt: It’s going to be really crazy. The album comes out the end of August, and then in September I have a small holiday in the United States. In October and November, we are going to do a headlining tour across Europe, it will be our biggest headlining tour so far. Then we will be prepping for the DVD show – we will also be re-releasing our first record Lucidity. We are prepping already to do a US headlining tour in April and May of 2017, we are seeing if we can do a co-headlining tour with another band. We are also looking into playing South America, also starting with another album already because you can’t start too early. It’s going on and on, but in a very good way- because I love my job!