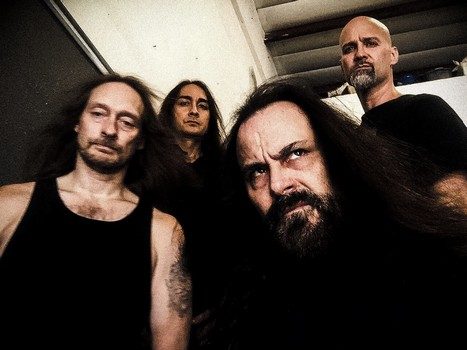 Few bands in death metal have a legacy that can match that of Deicide. From their early demos as Amon and then the classic self-titled release and beyond, they’ve left a legacy of the extreme. And while some of the early works have made for an incredibly high benchmark, the band’s most recent material, Overtures of Blasphemy, feels more akin to those classic days than anything else. Without resorting to making the material feel rehashed, Deicide have successfully recaptured that spark of intensity that made the best of their works so compelling. We got the chance to catch up with renowned vocalist Glen Benton to talk about the album as a whole, controversies in the band’s infancy, and some of his thoughts on the death metal genre and the concept of evil.

Dead Rhetoric: This is your 12th album. What makes an album like Overtures of Blasphemy stand out?

Glen Benton: I guess over time you define yourself. It’s defining our sound. We’ve always strived for something better each time, with each release.

Dead Rhetoric: Does it get tougher, given that there’s a certain fanbase for the band, to come up with a new spin on material without making it seem like more of the same?

Benton: This time around, we just wanted it to be fun. Simplicity was pressed upon everybody and the old school grooves and riffs and lyrics – we just focused on that. When we had that in mind, this [Overtures of Blasphemy] was what came out of it.

Dead Rhetoric: In hearing the album, it does sound like you are channeling that older vibe. There’s that intensity that the first few albums carried.

Benton: It was our last record for Century Media for this contract and we felt like we had nothing to lose, so we wanted to write a record that we enjoy instead of trying to impress someone else. We just wrote it for ourselves.

Dead Rhetoric: With this album being the end of the line, are you looking or are you planning to stay with Century Media?

Dead Rhetoric: From what I remember reading, Jack Owen more or less unceremoniously left the band in 2016. How’s it been to work with Mark English?

Benton: Mark is a great guy. He’s really laid back. He’s a great, sweep-type player. He’s very professional and methodical. He’s our age and he just fits in better. Kevin [Quirion] is an amazing writer and amazing rhythm guitar player as far as his technique. He’s become quite the lead guitarist too. He and Mark are swapping off on this record. We have a good chemistry going on with everybody.

Dead Rhetoric: How do you keep up with the demands of being an extreme metal vocalist as you have gotten older?

Benton: Every record, before I start touring, I eat a lot of lettuce wraps and do a lot of bicycle riding.

Dead Rhetoric: Do you do anything specific when you are out on tour or do you just relax your voice a bit?

Benton: I get my exercise doing that set, so when I’m on tour, that’s my hour of working out.

Dead Rhetoric: What do you recall about the years of your first releases, Legion and the self-titled?

Benton: That was our start; those first few records started turning into a ‘be careful what you wish for’ sort of thing [laughs]. After the second record, I was like, “Wow, I can’t believe this is still going!” Every time I do one I’m still surprised that we are making them. I never thought we’d be doing this so far down the road.

Dead Rhetoric: Is that a similar experience that you still get now?

Benton: Yeah, the beginning process of [writing], it’s like, “Oh fuck, we are doing this again?” There’s a lot involved. The studio is on one coast of Florida and we are on the other, so we drive back and forth for days and months. There’s long days at the studio, then you come home and write – it’s a pretty lengthy process.

Dead Rhetoric: Is that part of the reason why it took a little longer for this album? Just getting everything put together?

Benton: Now that making records no longer has an earning potential, they are like a business card. You give them away for free, like a flyer. Now that the business is like that, after we released the last record we wanted to tour the shit out of it. So we did that, and in the process, in the end of the touring we started to write. Myself, Steve [Asheim], and Kevin got in the studio and recorded all the rhythm tracks. Then it another year went by doing a few shows here and there and waiting to get into the studio. We had to do one thing, wait six months of it to go in and do something else. Scheduling was a lot of the problem. That’s what took most of the time.

Dead Rhetoric: Do you feel that some of the controversy back then (crucifix branding, throwing animal entrails on stage) helped in getting the word out about Deicide?

Benton: [Laughs] It was shock. Everybody was doing shock back then. It was there to shock people. We were kids. We did things without thinking. The last interview I did, someone was asking me about the whole guts thing. It was just one of those things…to do it in this day and age, you’d find yourself locked up! Times are different man.

Dead Rhetoric: Going along with that, with my own introduction to Deicide in the ‘90s and being a teenager, there was a sense of scariness to death metal. Do you feel that death metal in 2018 is ‘scary’ per say?

Benton: I don’t know about that. To some people – whatever you get out of it is what you get out of it. If you want to be scared, you can but you don’t have to be. It’s just an artistic expression, it’s not meant to convert you to the dark side or anything [laughs].

Dead Rhetoric: So how do you feel that things have changed in death metal since your beginnings in it?

Benton: The obvious – we are getting older and some guys are dropping dead. It’s not the same anymore – the earning potential has been destroyed and devastated. A lot of guys would rather not put up with the bullshit. A lot of the classics, the guys are bringing it back and I’ve got nothing but respect for them.

Dead Rhetoric: What kept you with it through the years?

Dead Rhetoric: Almost 30 years in at this point, what’s your relationship with Steve Asheim like?

Benton: Steve and I…what can I say? I go over to his house, if he needs some yard work done I help him out. I was just over there recently to trim his trees. We are friends and we’ve been friends since he was 16-17 years old. It’s been a long time. Steve and I have been the team – we’ve done the writing and we are the ones that have kept this thing afloat. We could have very easily said fuck this and gone to do other things. I could have done a solo career or we could have gotten other things going. This is where our hearts and souls lie.

Dead Rhetoric: Being more outspoken, controversy seems to follow you and the band, are there ever any moments that you’ve regretted something that has happened?

Benton: I’ve learned to show some restraint when I do interviews now. People try to bait me and try to pull me off the bench. I see it personally and I’ve seen it happen to other people. I’m just not going to let it happen anymore. That’s why I didn’t do much press for the last record, or the one before that. I just don’t have the time for certain things.

Dead Rhetoric: Where do you think the human attraction towards evil come from?

Benton: I don’t know if it’s from when you are a child and you see that first scary movie and it sticks with you? For me, that’s what it was. I saw The Werewolf and seeing that transformation right in front of me, I don’t remember what time of day it was but I ran the fuck out of the house screaming like a lunatic! Dark Shadows was on TV when I was a kid, and whenever I would hear that Dark Shadows theme, I’d be like, “What the fuck?” [Laughs] I used to do it to my kids. For my kids, it was The X-Files theme. If they heard it, they’d be shouting, “Turn it off!” [Laughs] So I don’t know if it has something to do with that. I like gargoyles, bats, and shit, so my house is done up in the old Hollywood Regency style, Addams Family kind of shit with gargoyles around the house. I like that kind of motif.

Dead Rhetoric: You mentioned Dark Shadows and X-Files. Are you aware of any shows or movies today that have that same kind of ‘strike fear into the heart of somebody’ vibe?

Benton: I watched Hellraiser III the other night and it was fucking stupid. The first one, I was like “What the fuck?” I haven’t had a movie had those sort of effects on me [for a while]. The way they make movies today, I can pretty much tell you in the first 15-minutes of the movie the plot and everything that’s going to happen.

Dead Rhetoric: I think it’s a part of the whole getting older thing…

Dead Rhetoric: To finish up, what plans does Deicide have for the rest of the year and into 2019?

Benton: I just want to get this thing out. I want everyone to hear this album so we can establish what songs are people’s favorites and get out on tour. US, Europe, and the rest of the world.