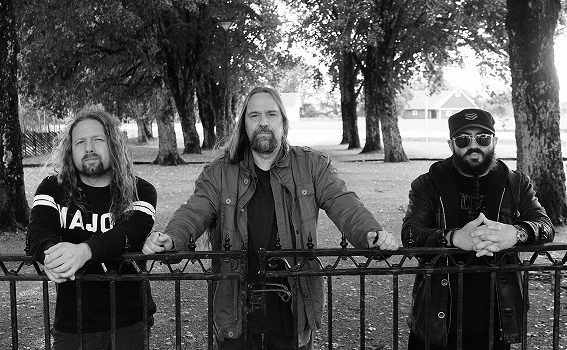 Our last Rapid Fires of 2017 features albums in the often perilous position of being released near the end of the year. This usually means they’re out of the year-end list fray, not to mention getting lost in the shuffle of the holidays. Now, metal is far more important and interesting than the holidays, so here’s another round of short reviews, this time featuring Band of Spice (pictured), Black Wail, Chiro, Coronatus, Disaffected, Displeased Disfigurement, Eccentric Pendulum, Evergrey, Infidel Reich, Iron Savior, Melankolia, One Step from the Edge, Reverence, Satanic Warmaster, and Stormhold. 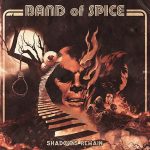 Band of Spice – Shadows Remain (Scarlet)
Still a monumental shame Swedish singer Spice isn’t more well-known. Easily the best singer Spiritual Beggars had in addition to his work in groove thrashers Kayser, Spice possesses one of those gritty, yet melodic voices that can not only carry a tune but also dole out relentless hooks. The man’s Band of Spice solo outing serves as an additional platform for his golden pipes, with Shadows Remain emerging as a concept album about a particularly difficult period for the singer. Covering a wide range of acoustic rock, metal, hard rock and whatever else tickles the man’s fancy, Shadows Remain holds up quite well. As it should. Spice is singing. – David E. Gehlke (Band of Spice Facebook) 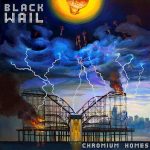 Black Wail – Chromium Homes (Rhyme & Reason)
Jersey rockers Black Wail work the map rather effectively on Chromium Homes, their third EP. Runs of stoner rock (“They”), metal (“Thee Ghost”) and poppy dark rock (“Norwegian Wood”) show a band less concerned with their own identity than rather writing good tunes, which these are. And there’s a lax, somewhat playful side to the whole thing, like, these guys just sit around and throw ideas at the wall and see what sticks. Usually, it works, making the aforementioned gamut run a reality on the jammed-out “The Dead Man’s Hand” and snappy “Radioactive Mutation.” – David E. Gehlke (Black Wail Facebook) 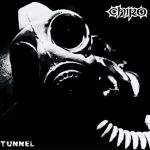 Chiro – Tunnel (Mighty Music)
Danish groove metal, you say? That’s how Chiro dials it up, an outfit who originally got its start in the early ‘’90s, only to dissolve, then reform 2013. (Note: The band originally went under the “Chiro Therium” moniker.) The band’s first proper full-length is surely an odd duck, recalling the Pantera bludgeoning days of simple ‘ol groove metal. There’s a nu metal element lurking about, but it’s nothing offensive, so think of these guys as the Danish Ektomorf, or something similar. European groove metal has always been on the fringe anyway. – David E. Gehlke (Chiro Facebook) 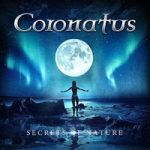 Coronatus – Secrets of Nature (Massacre Records)
Productivity is a benchmark of this German symphonic/gothic metal outfit – as Secrets of Nature is the eighth studio record for Coronatus in 11 years. A conceptual record surrounding the mysticism of nature, the group’s penchant for multi-lingual lyrical content keeping things interesting (six songs in English, two in German, plus “Herr Mannelig” a medieval traditional cover track in Swedish) beyond the angelic three-part vocals, bright orchestral maneuvers, and cinematic atmosphere for these arrangements. It’s a swirling combination of metal that works, slightly power/ progressive in spots for “The Hunter” (think Symphony X/Kamelot here) against other moments that are more Subway to Sally/Therion-oriented against extreme nuances for “The Little People of Iceland”. If you feel the gothic/symphonic metal movement has reached stagnation, Coronatus could revive your spirits. – Matt Coe (Coronatus official website) 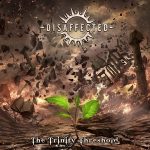 Disaffected – The Trinity Threshold (Chaosphere Recordings)
Disaffected bring progressive, groovy, and modern death metal on their third release, The Trinity Threshold. The strongest aspect of the release is how they can blend brutal riffs together with more progressive structures without compromise. One minute, you may face a frantic death metal riff (with equally brutal roars) and the next minute you’ll find a more melodic passage with some spoken word. Some impressive bass rumblings, some scattered clean vocals, and more intricate melodies all play their part as well, providing a sound that’s well-rounded and interesting. Well worth checking out for death metal fans, both melodic and brutal. – Kyle McGinn (Disaffected on Facebook) 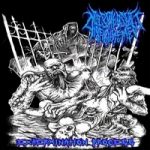 Displeased Disfigurement – Extermination Process (CDN Records)
Hot off the heels of their sophomore effort, Origin of Abhorrence, South African act Displeased Disfigurement return with a reissue of their first effort, Extermination Process. While this scribe wasn’t too intrigued by effort number two, their debut feels a bit less ‘by the books’ when it comes to slamming death metal. There’s more going on than just slamming from track to track, with some melodies and grooves that help do a better job of discerning the brutality. So there’s all the brutal riffing and slams that you crave, but underneath it all there is also more to make sure it doesn’t sound like a simple retread of the song before it. Hopefully album #3 can move back in this direction. – Kyle McGinn (Displeased Disfigurement on Facebook) 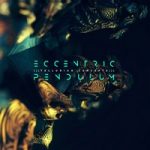 Eccentric Pendulum – Tellurian Concepts (Self-Released)
Comprised of one 18-minute long song (broken into three parts), Eccentric Pendulum are suitably named. Tellurian Concepts swings between a myriad of influences within the progressive and death metal regions with some jazzy vibes, as well as providing some of it’s own spice to the mix. Flowing saxophone, exquisite bass patterns, and intricate guitar solos are the norm on this EP, alongside some solid growls that aren’t too abrasive – giving the music just the right amount of heaviness while allowing the listener to enjoy the melodies circulating around it. An eerie sense permeates things from time to time as well, relishing an vibe that feels more unique at most times than remotely standard. An unsung gem. – Kyle McGinn (Eccentric Pendulum on Facebook) 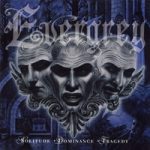 Evergrey – Solitude Dominance Tragedy re-issue (AFM Records)
The second album from Evergrey remains an all-time classic to these ears – taking the band’s darker, melodic power/progressive metal style to another level. Reaching deeper into the emotional nature with tone, atmosphere, and dynamic textures, the tightness of transitions and incorporation of off-time riffing/tempo moments as well as setting things up with echoing refrains makes this an exhilarating, enticing experience front to back every time. “Solitude Within”, “She Speaks to the Dead”, the serene ballad “Words Mean Nothing” and the chilling “The Corey Curse” exemplify why Evergrey deserve their premiere status in the metal landscape. Tom Englund’s bluesy, impassioned vocal melodies merge to the captivating musical soundtrack as a multi-sensory odyssey that leaves you breathless. – Matt Coe (Evergrey official website)

Infidel Reich – Infidel Reich (Regain)
An American-meets-Netherlands death metal ensemble, Infidel Reich happens to comprise of current and former members of Acheron, Asphyx and Incantation, which, of course, immediately suggests the old-school is in play. And it most certainly is on the band’s self-titled debut EP. Featuring five straightforward, meat-and-potatoes jams, Infidel Reich appropriately roils and rolls like a steamroller going downhill, finding the appropriate intersection between Autopsy’s slop-it-up approach and the sheer brutality of Floridian death metal. Considering the parties involved, there’s no way this couldn’t be heavy. – David E. Gehlke (Infidel Reich Facebook) 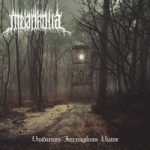 Melankolia – Vividarium Intervigilium Viator (Hypnotic Dirge)
Those looking for something a bit off the beaten path would do well to check out Melankolia. The ambient/neo-classical act is one that’s suitably dark for metal fans (the cover gives a good impression of what to expect), with some glimmers of light every once in a while. It contains some lengthy tracks, that are mostly instrumental in design (including some nature vibes), but the mood is right for something that is more reflective than it is invigorating. Suitable music for a rainy, dreary day when you have had your fill of more explosive material. – Kyle McGinn (Melankolia on Facebook) 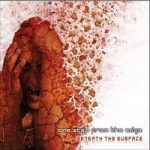 One Step from the Edge – Beneath the Surface (Self-Released)
On their debut effort, One Step from the Edge channels many things in the metal spectrum, but none more than Nevermore. Some Warrel Dane comparisons are inevitable, and the band’s darker approach to heavy metal fare (even pushing the boundary towards more extreme material at times) do give off the same type of feelings. But the band’s dabbling into more groove, thrash, metalcore, and progressive areas move them away from any copycat claims. There in turn lies the one problem – it seems to go in a few too many directions. One can tell the proper materials are there to build up the band, but they’d be wise to streamline the formula a bit going forward. – Kyle McGinn (One Step from the Edge on Facebook) 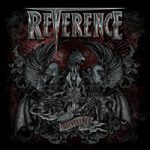 Reverence – Foreverence (Razar Ice Records)
Following up 2015’s Gods of War album and in tribute to the loss of guitarist Pete Rossi who passed away last March, Foreverence is an EP featuring six new tracks and two live bonus cuts from their forthcoming live record. Notable players include the upper echelon voice of Scott Oliva (Wind Wraith, ex-Inner Strength) and drumming from powerhouse Steve ‘Doc’ Wacholz (ex-Savatage) – and you’ll get solid US power metal here. Songs like “Firelord” and the mid-tempo stomper “Phoenix Rising” sit in that Armored Saint/Metal Church comfort zone – the right harmonic emphasis when called for either in specific guitar hooks or strong vocal engagement. Can see Europe and the Far East championing Reverence a tad more than most US metalheads – but that doesn’t discount the talent or quality material on display. – Matt Coe (Reverence on Facebook) 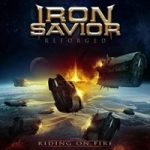 Iron Savior – Reforged – Riding on Fire (AFM Records)
When you can’t re-release your back catalog legally, the next best thing is to re-record those catalog songs – which Iron Savior has here for this 19-song, double album release. The five studio records on Noise from 1997-2004 get a modern update – meaning lower tunings, current production benefits, and the power class plus stick to it-style choruses we’ve come to treasure from this German outfit. Affinity abounds for an early speed burner like “Brave New World”, while “Eye to Eye” showcases their spacey attitude against Priest-like mid-tempo fury. Probably best served for those recently converted to the Iron Savior fold – as the old guard got in early, when the second wave of power metal started to gain traction across Europe. – Matt Coe (Iron Savior official website) 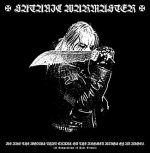 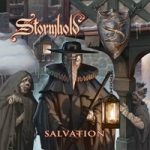 Stormhold – Salvation (Pure Steel Publishing)
After touring with Grave Digger and shows with Hammerfall and Bullet among others, Stormhold return with their second full-length Salvation. Fiery power/heavy metal with proper twin guitar harmony accents, high octane vocals, and choir-oriented choruses give the listeners what they desire in this genre. It’s hard not to rejoice, march, or raise your swords and shields to “Heart of a Hero” or the almost eight-minute epic roller coaster “Edge of the World”, while Hibria-like guitar/bass action puts “We March” at the top of this nine-song platter. The folk-textures also give the material a larger, throwback feel – but it’s obvious the quintet live in that European power/feel good mold throughout – sure to promote air instrument simulations and loud shout-a-long moments. – Matt Coe (Stormhold on Facebook)