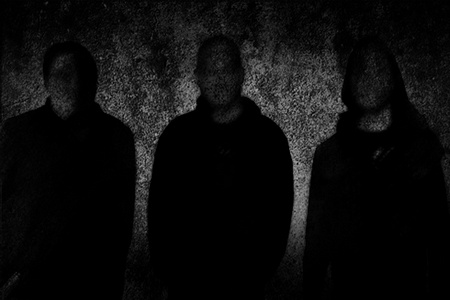 With all of the cross-pollination and hybridization of metal genres, not to mention the various “branches” that extend outwards, there’s much to take in as one partakes from the metal genre. There’s acts that have a resounding metal core (not “metalcore”), yet sonically stray from the sheer heaviness. Think of bands that seemingly blur the lines – Katatonia, Anathema, and Antimatter roll off the tongue. Also worth tossing into this category is Deathwhite.

Now two EPs into their career, Deathwhite have laid the groundwork to thrust themselves into the same mentioning line as those in the above paragraph. Gloomy and depressive material that doesn’t seem to miss on a hook-y chorus is a benchmark with their latest release, Solitary Martyr. Keeping their identities under wraps, we were able to secure an electronic interview with the band, who were gracious enough to answer our questions on the reasons for anonymity, their lack of touring, and what to expect in their immediate future.

Dead Rhetoric: Solitary Martyr follows up 2014’s Ethereal EP. How would you compare the two EPs?

Deathwhite: Solitary Martyr is perhaps more focused, heavier, and has better thought-out songs. That sounds like a generic answer, though. But, more work was put into the new EP than the Ethereal EP, which is probably why it came out a little better. However, that’s not to discount the Ethereal EP – it certainly has its strong points and is above all else, a proper snapshot of where the band was at the time. Solitary Martyr, though, is just about the right mix of everything the band can do well…at this point.

Dead Rhetoric: Anonymity is something that most bands don’t take to with the age of the Internet. Why take the anonymous route (even down to the outlined/darkened band photos)?

Deathwhite: We’re not interesting people to begin with, not to mention we don’t play live shows. Therefore, there’s no real reason for us to take standard band photos, or even include our names in the credits. The music comes first. There’s a risk in making oneself too available. As in, oversharing, or letting personal matters get in the way of the music. By taking out these elements, there’s nothing else to focus on except for the music. We hope to keep it this way.

Dead Rhetoric: With the advent of Facebook and Twitter, do you feel that the need to maintain accessibility with a demanding fanbase puts a strain on what is important (read: the music)?

Deathwhite: Yeah, it does. There’s a lot of bands who overuse social media, which in a way, takes away the mystique of being in a band. It works in some facets, absolutely, especially when getting the word out about shows, recordings, and more fan-related interactions. For a band like us, none of those things really factor into the equation. We do answer emails from fans, but you won’t see us on social media – there are far more productive things to be doing. We had a Facebook account when the band first launched, but it proved to be somewhat useless.

Dead Rhetoric: Deathwhite is not a touring band. If you suddenly changed your minds, would this break your veil of anonymity?

Deathwhite: There is a minute chance we would become a touring entity, therefore, we probably won’t break our veil of anonymity. It’s a nice thing to think about – touring the country, globe, etc. , playing our songs to willing audiences, but given the current state of the industry, it’s not likely. Our songs could certainly be replicated in the live setting, but who knows to what extent. We’re in no hurry to find out. For now, we’ll stick to being a studio-only band.

Dead Rhetoric: With many bands relying almost solely upon touring to keep going, do you consider Deathwhite to be a “pet project” of sorts?

Deathwhite: Right, Deathwhite will always be that type of band. You could say we’re a project, as this isn’t the full-time band for at least two of its members. Some of us do a considerable amount of touring, moonlighting in a few well-known metal bands, while some of us are focused solely on Deathwhite. It’s a nice setup; no real pressure, other than the pressure bestowed upon ourselves.

Dead Rhetoric: Were you pleased to be able to offer Solitary Martyr on CD, as opposed to the digital only Ethereal?

Deathwhite: Yes, we thought about releasing Ethereal on CD, but given it was debut, it was a safe move to just release it digitally. We decided to package it together with the Solitary Martyr EP, so now people can get both on one disc should one prefer the format of physical copy. So far, we’ve been pleasantly surprised with album sales.

Dead Rhetoric: With the blur and subjectivity of what it is to be “metal,” what is the essence of the band that lands them in the metal category?

Deathwhite: We have a lot of metal elements – distorted guitars, heavy drums, double-bass drums, etc. etc. We were labeled as “dark pop” by a prominent webzine, which is fine, actually. Everyone hears music differently, therefore, there is no fault in labeling us as such. Granted, we were a bit taken back by the tag. But, music is in the ear/eye of the beholder, people can call us whatever they want. That makes things a bit more interesting, wouldn’t you say?

Dead Rhetoric: What are three albums that you feel have helped solidify the sound you are trying to achieve with Deathwhite?

Deathwhite: Quite the difficult question, although we could point to the following as being proper reference points:
1. Katatonia – Viva Emptiness
2. Anathema – Eternity
3. Daylight Dies – Dismantling Devotion

Dead Rhetoric: With two EPs under your belt, is Deathwhite’s next move to expand to a full-length or continue churning out EP material?

Deathwhite: We can say that without a doubt, the next release from us will be a full-length. We’re currently working on about seven or eight songs, and hope to get up to ten or 11 by early 2016. We may do a cover song, although that can be a slippery slope. But yes, we’ve released two EPs, so now it’s time to put all of our focus and energy into a proper full-length. It’s an exciting endeavor.

Dead Rhetoric: In a recent interview, it was mentioned that you were considering adding keyboards to your sound in the future? Do you feel that there is a “right” way to implement keys into a sound like your own without causing them to become hokey/cheesy?

Deathwhite: When you think of hokey and/or cheesy keyboards, they usually fall into the power metal category. We’re obviously not a power metal band, so keyboards – should they be implemented on a more heavy basis – will be used as sort of an “atmospheric” sound. It probably won’t be dominant, which in our way, would be the right way to implement them. You can point to a lot of bands we pattern ourselves after who use keyboards for atmosphere and ambience.

Dead Rhetoric: Has there been any label interest in the band, or do you intend to keep things DIY on that front?

Deathwhite: There has been some label interest indeed. We’ve reached out to some; others have reached out to us. We won’t sign anything we didn’t think was fair, or couldn’t enhance the band’s career. There’s nothing wrong with staying DIY in this day and age. All of the money from sales (which we’re incredibly thankful for) goes right back to the band. There are no deadlines, no one to delay releases, and no pressure to bow to. It’s not a bad spot to be in, although we certainly wouldn’t mind being on a good metal record company.

Dead Rhetoric: Without much to add about touring, what can one expect from Deathwhite as we move towards 2016?

Deathwhite: We are presently putting songs together for a full-length album. Songwriting should be complete by winter, then we will hopefully put things to tape in the spring, with a proposed summer release, much in the same manner we did for Solitary Martyr.