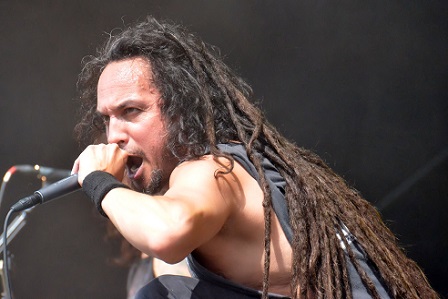 Dead Rhetoric: You went down to Florida to record with Jason [Suceof] again. At this point, is it a good thing to get out of your comfort zone in the Bay Area?

Osegeuda: In a huge way. There’s no outside distractions; complete submersion and we needed that, especially with how recorded this one. Simultaneously, Rob was in one room recording in his leads, and in another room, I’d be doing vocals. There were times he’d be working on stuff with Ted [Aguilar, guitars] and I’d be in the other room working on lyrics, so we’re constantly going at it in some way, shape or form. It’s nice to be away from friends, family, kids – for those who have them – it needs to be in the case. We can get easily distracted, let alone from the comforts of home.

Dead Rhetoric: There’s also this consistency with the same lineup, same studio, same artist, same producer. This can only help a band.

Osegeuda: I think with this one, yeah, because it inspired us. I think with the first one – the first one – it’s seems like that  the way I say it, we in a sense, this is our third shot at a sophomore slump, so to speak. I think we’re going to smash that. It’s the second record with this lineup, but also the second record with this entire team. It was great. We went in there and we felt like we had all guns behind us, a great team behind us. We were really excited with how the last record turned out and we knew once we started hearing the songs, that we knew it would be much a stronger release.

Dead Rhetoric: I hate to say this, but this is a cliché a lot of bands use, but it applies here: Would you say this is the thrashiest thing you’ve ever done? A lot of the songs are pretty fast.

Osegeuda: The only album comparable to being this thrash, would be The Ultra-Violence and this is the closest we’ve come to it.

Dead Rhetoric: Is this a product of all the live shows?

Osegeuda: In a huge way! Especially touring for the last record and playing that material and the crowd, watching how the crowd reacts. That directly feeding off that younger crowd exists and seeing how it fires them up, would get us excited. Then as soon as Rob would get off stage, he’d go to the back room or bus and start writing riffs right from there, and his adrenaline is peaking. He’s getting more and more technical, and writing way faster material and then to top it off, at the end of that cycle, we go back and tour for the 25th anniversary of The Ultra Violence. We were inspiring ourselves with our earliest thrash records. It’s a nice little cycle.

Dead Rhetoric: And, it’s not some type of rehash or throwback to The Ultra-Violence.

Osegeuda: It’s definitely its own beast, and I like the way this beast is sitting [laughs].

Dead Rhetoric: Rob said the album is superior to Relentless. Do you agree with that statement?

Dead Rhetoric: I was thinking of the Clash of the Titans show back in 2001, so I’m curious what your memories are?

Osegeuda: Oh, wow. My best memory of that show is probably…the crowd reaction as soon as Billy Milano introduced us. The reaction was overwhelming to me and I didn’t know how it would be. We were the band on the bill that was the last to confirm to play. We were the band with the longest hiatus who played that day. It took me aback and my adrenaline peaked from the get-go, and from the moment we started to the moment we stopped, the crowd went nuts. I could have told you that maybe from the first song, I didn’t want this to end. I had been fighting and clinging to it with all of my might for this band to continue since then.

Dead Rhetoric: You were doing Swarm, at the time right? Were you touring at all?

Osegeuda: Absolutely, and in fact, we were on tour with Jerry Cantrell when he was doing the tour for Degradation Trip I and II. That’s when we got the call about doing the show and agreed to it. I, Rob, and Andy [Galeon] were in that band already, and Rob and Andy were practicing the Death Angel songs on the day we got a sound check. Dennis [Pepa] and Ted were back at home, learning the stuff and practicing with each other. We got home from that tour, had two days off, then rehearsals the next day, then we were on stage.

Dead Rhetoric: Was that a classic case of something having minimal expectations, but exceeding your wildest dreams?

Osegeuda: Absolutely. That’s why it was supposed to be a one-off show and here we are, 12 years later having this conversation [laughs]. If you are looking for when to pinpoint when thrash jumpstarted again, I’d put it to that show. That was a springboard for it.

Dead Rhetoric: Had that show not of happened, do you think Death Angel still would have gotten back together?

Osegeuda: Things happen for a reason. We wouldn’t have done it for any other reason but for the fact Chuck [Billy, Testament] was diagnosed with cancer, and I thought if we were ever going to do it, this would be the reason. It was for a great cause, nothing for money for us to gain…I was the last holdout of the band too. I was approached a couple of times by Death Angel to reform and I always flat-out said no. Which is funny now – three minutes into it, I was like “No way, I’m never going to stop doing this unless my body doesn’t let me.”

Dead Rhetoric: What was making you hold out?

Osegeuda: To me, I held that time in my life extremely sacred, and I thought the fans did as well. I didn’t want to jeopardize the legacy we created back then. We put out three albums, and then we were gone. I didn’t want to ruin it. How was I supposed to know bands can take 11 years off and write their strongest material?

Dead Rhetoric: The way you ended unfortunately, was with the bad bus crash. This helped rectify it.

Osegeuda: Oh yeah. There was times even for years, that I couldn’t doze off in a car. I’d catch a reflector in the middle of the road and jump up. I sleep on buses all the time now, but don’t get me wrong – I still get spooked.