With another year down in the books, things are looking bright here at Dead Rhetoric. A recent face-lift spruced things up at year’s end, and loads of new content await as we welcome 2016 into existence. A big thanks to all of the supporters of our site – our dedicated readership, all of our PR partners, and the entire staff. We couldn’t do it without you. To cap off 2015, we’ve collected all of the “Best-of” lists that have been posted over the past few weeks if case you missed one.

We have also pooled our data from the individual best-of lists to generate an overall top 5 albums for Dead Rhetoric. The albums listed below had to have appeared on at least two staffers lists (our #1 appeared on no less than 4) to warrant inclusion. We have also listed a few honorable mentions, just to share the wealth a little bit. Though it goes without say, if you haven’t checked out any of these albums, do yourself a favor and remedy that pronto. 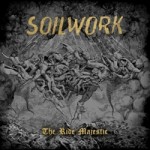 1. Soilwork – The Ride Majestic (Nuclear Blast)
Hard to believe that Soilwork has put out ten full-length records! While other established melodic death metal bands continue to fizzle or fold, Soilwork’s last two records have brought an invigorated and fresh spark to the band. They are willing to experiment and branch out, all while still maintaining their flagship sound. A number of tracks have fought to be “the favorite,” a true sign of a keeper. There’s no record that I listened to more this year. – Kyle McGinn 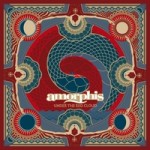 2. Amorphis – Under the Red Cloud (Nuclear Blast)
Steady Amorphis goes. Under the Red Cloud was hawked by guitarist Esa Holopainen as one of his three favorite Amorphis albums ever, and it’s easy to see why. The songs here are climatic throughout, guided by Tomi Joutsen’s masterful vocals and of course, those wooden, far-and-wide guitar melodies. The Finns will be hard-pressed to top this one going down the road. – David E. Gehlke 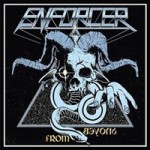 3. Enforcer – From Beyond (Nuclear Blast)
European musicians never gave up on old school, traditional metal and its power/speed offshoots – Sweden’s Enforcer have consistently championed the cause and From Beyond could be their masterpiece. Adding in some mid-tempo and epic moments to their solid Maiden on speed foundation brings them worldwide acclaim and admiration from the growing legions. – Matt Coe 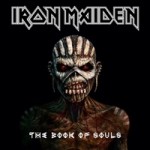 4. Iron Maiden – The Book of Souls (BMG)
Book of Souls has been called, by some, the best of the new millennium-era Iron Maiden. A big-time step up from 2010’s The Final Frontier, Iron Maiden has raised the bar yet again, and creating this double album opus at this point in their career is really astounding. Book of Souls shows Iron Maiden in Powerslave form. – Daniel Keating 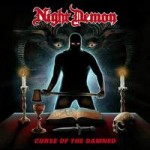 5. Night Demon – Curse of the Damned (Century Media)
While I consider myself an eclectic music listener, NWOBHM, traditional and speed metal dominated my focus this year, much of which leads back to Night Demon, whose full-length debut is chock full of each. Be it the hard-driving “Screams in the Night,” the toe-tapping, mid-tempo “Mastermind,” or the Scorpions-esque title track (think “The Zoo”), you really can’t wrong with any of the songs here. It may not be the most original release of 2015, but from start to finish it’s a tour de force of fast, powerful, catchy songs and when you write this well, there’s no need to reinvent the wheel. – Matt Bower