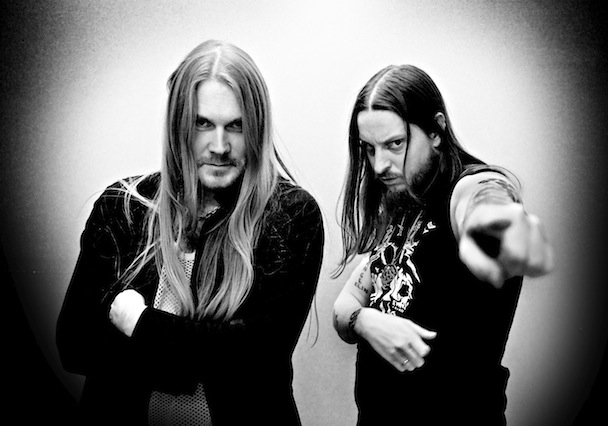 A bit of an apt title, Circle the Wagons, eh? Not like Darkthrone are the linchpin of black metal nowadays, but they are still one of the genre’s staple bands. Both Under A Funeral Moon and Transylvanian Hunger are BM essentials, the standard by which the rest of their career is measured. Yet the duo of Fenriz and Nocturno Culto have done their best to distance themselves from their “classic” era, releasing a string of albums this decade of the non-black metal nature. In fact, one could attest albums like 2006’s The Cult Is Alive and F.O.A.D. were more punk than black metal, which makes Circle the Wagons a welcome return to the proto/NWOBHM angle of their late 90’s/early 00’s period. It’s fresh, oddly enough…for a band that thrives on not being fresh.

One of the more outspoken characters in black metal, heck, all of metal, Fenriz can reel ’em off like the best of him. His knowledge and wisdom regarding the BM scene has made him a go-to source for quotes, especially now given the release of Burzum mastermind Varg Vikernes, a man whom Fenriz has remained on friendly terms. Nevertheless, we didn’t have to worry about picking our spots – it’s on from the word “go” with Fenriz…

Blistering.com: We’ll get this out of the way first: are you now tired of having to answer questions about Varg Vikernes?

Fenriz: I’d say for Circle the Wagons, 95% of the interviews I’ve done so far had questions about that (I’ve done around 50 interviews so far for this album since early March). What nags me is that no one asked back in the day, ‘cuz then the metal scene was more of the “strong silent type.” Now it seems more like a place for gossip-freaks, ha-ha! Having said that, Varg got in touch last June and we’ve been in friendly contact since then. Belus [Burzum’s latest] continued greatly where he left off as a free man in ’93.

Blistering.com: For someone who has been there first-hand, do you feel the black metal hype machine is bigger than the music itself?

Fenriz: Since 1994, yes. The main years have always been the 1981-91 styles (obviously what we listened to when we abandoned technical horror death metal in 91, we spent most of 1990 listening to Hellhammer, Celtic, Bathory, Motorhead and black Sabbath anyways), with some new greats like Burzum, Von and Ved Buens Ende, but in ‘93 I really thought it was already a bit “much.” In ‘94 and ‘95 I was still into it, but after that it started to get weird in a bad way, I guess. People accepting [the] Cradle of Filth sound as black metal, that’s when I felt the whole shit turned its back on me. I had left anyway, supporting thrashers like Aura Noir and Inferno in ‘94 and ‘95. But BM was still my trade at the time, so I’m guilty too, ha-ha

Blistering.com: You’ve never been one to shy away from making commentary on the BM scene. When you re-emerged in the late 90’s, were you prepared to take on the role as not only the mouthpiece for Darkthrone, but for black metal in general?

Fenriz: That’s where you’re wrong, the whole shit should’ve been kept a lid on but when the alternatives where that less freely/well-spoken contenders would get the “airtime,” then it was my responsibility to still try and say something worthwhile about the genre. However, I was there, buying and listening to the ‘80s bands that were blackened in the ‘80s and drawing much inspirations from them again in 1991. It was always the ‘80s, so I’m a mouthpiece for that whole decade, all metal styles not only black metal, also the underground life with tape trading, ‘zines, radio stations and DIY bands, the only way to voice your opinion back then. Now every lame-ass can “share” their new-found opinion. Daft and counter productive.

Blistering.com: Suffice it to say, were the 00’s better to you than the 90’s?

Fenriz: In so many ways, the struggle was in both decades all the hate for changing styles, although as I said, back in the early ‘90s, there were no internet crybabies so the mother load of hate hits me now. But the ‘00s prepared me to hit back: I quit going out exactly five years ago, cut down on drinking 400% and let’s say I also trained so I could kick the ass of both 2001-fenriz and 1993 Fenriz easily now. Also the underground was fucked in the ‘70s, great in the ‘80s, lame in the mid and late ‘90s, but then great again in the 00s, as all the killed metal genres were re-animated. Even trad doom and proper grindcore, all we need are some bands sounding like early Queensryche/early Fates warning or Liege Lord and we’re completely self-sufficient in the underground with a whole parallel universe ‘80s metal land! YEAH!

Blistering.com: If you had a crystal ball, what do you see in store for Darkthrone this decade?

Fenriz: Oh, we never plan or wish thereof, we change when we change, coincidence is our key, since summer 1991 we made songs on our own and all shall be accepted, recorded and released. And that also happened – 20 years of freedom, but we have to WORK for it, we work day jobs so we don’t have to sell out or do stuff we don’t want to with Darkthrone.

Blistering.com: You’ve been cranking out albums at a relatively quick pace the last decade. For you and Nocturno, does the process ever get old? Meaning, do you ever feel the need to shake things up a bit?

Fenriz: We sure did, didn’t we? I can think of a whole panda-scene that is DEFINATELY shook up, but we don’t feel the need to do that just for the sake of it, when our songs sound like they do now it’s because we inside must do this. We don’t discuss, we just do. When Ted [aka Nocturno Culto] bought the portable studio, it was a whole new era for us, and we’re still in the beginning of that, finding new ways to improve and regress/progress with each recording (we record in batches, 2-3 songs every time, so since 2005 we’ve put up that studio over 20 times) he has to set it up at his home again to do additions and HIS vocals.