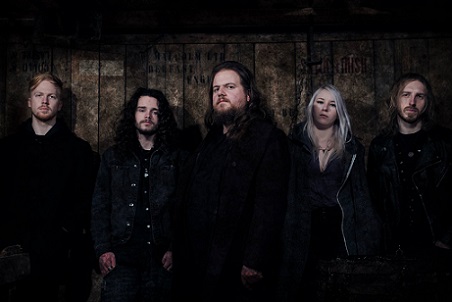 Dead Rhetoric: As for Severance, it capitalizes upon everything you did well with Last Caress. Going into the writing of the album, what was the approach?

Mulgrew: Myself, Sarah [Weighell, guitars] and Krum sat down after one of our tours to talk about where we would bring the sound on the next album. What we agreed upon was generally to open our sound out, broaden the sphere of influence and yet come up with something that was more focused on our own identity. We wanted to make the arrangements less bloated, with more twin lead and choruses. That was the idea but honestly when it comes to writing it’s quite an organic process. We don’t think too much about the component parts, we go with what sounds and feels right and analyze it later.

In the end, with all the turmoil within the band, the writing process turned out quite uncomfortable. Most of it fell on my shoulders to bring the songs to the table in a very short period of time; I would say I wrote 60-70% of the album in about 10 weeks with most of the rest coming from Sarah. Writing sessions were tense, occasionally getting very heated indeed. As time went on, we knew Lisa was on the way out and the atmosphere was pretty terrible. But you can either lie down in despair or take the bull by the horns, and I chose the latter.

Dead Rhetoric: Did the run of live shows you did over the last two years have any influence on the songwriting for the new album?

Mulgrew: I guess it was an insight into which songs work best in the live environment. We’re a band who thrive in the live arena and while the first priority is writing great albums, we knew we needed to write songs that were varied enough to work in the live scenario. We don’t want to be a band that writes great albums that don’t work live so every show and every tour helps you figure out what works and where.

Dead Rhetoric: Not like there weren’t any on the last album, but Severance seems to have better vocal hooks, specifically on “Songs of Gods and Men” and “Blood, Sand and Stone.” Was Krum giving more of a green light to do as he wished on the new songs?

Mulgrew: It’s more that we have a better ear for hooks and melody now, I think. We made a conscious choice to pay more attention to vocal melodies on this album to make sure they were varied and put Krum’s capabilities to as much use as possible. We were more critical of vocal melodies, whereas on the first album we were more inclined to settle for something that was okay. Having said that, everything was written in such a short space of time that there wasn’t really as much honing of vocals as we’d have liked. We wrote a lot of lyrics in the studio, to the point where Krum would be in the vocal room doing a take and I’d be handing him warm printouts of the next verse as he finished the previous. We’re much happier with the vocals on this album, but honestly, I think it’s still only a taste of what Krum is capable of. He is a great vocalist, and he has a classic metal album performance in him.

Dead Rhetoric: You may disagree, but you are one of the shrinking number of bands with their own sound. Do you ever feel deterred by the homogenous nature of the metal scene?

Mulgrew: Each of us has a very wide range of stuff that we listen to and are influenced by, but our hearts always come back to heavy metal. There is so much music out there these days that can be accessed so quickly that sometimes you can get bogged down in the same old shit over and over. But there are enough bands out there doing great things and pushing the boundaries of the genre to stop us losing faith. That said there is another school of thought which says not every band needs to sound revolutionary. Take a band like Enforcer for example, who are pure NWOBHM worship. Anyone who says they are doing anything new is a fool, but how can you be a heavy metal fan and not think Diamonds for example, is incredible? Metal is so much, sadly, about nostalgia these days but I love that album, so who cares? For every Enforcer, there is a Madder Mortem, I don’t worry so much.

Mulgrew: We’ll be touring the UK again this autumn, after some Irish launch shows. We’re hoping to tour Europe again at the end of the year or early next year. We’ve also started jamming out the first ideas for our next album. With the new album there is a lot of new energy and we’re very excited about where we can take things for our next record.