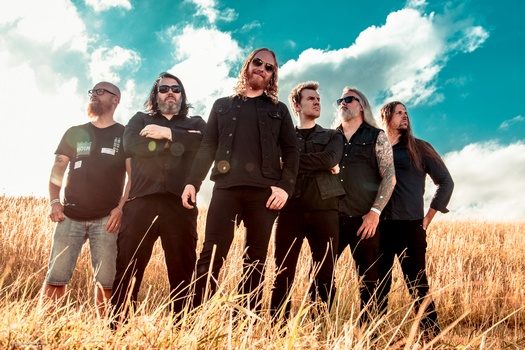 Of the Gothenburg melodic death metal godfathers, Dark Tranquillity has arguably been the most consistent of the bunch, even in their most experimental years. Whether it was that sense of melancholy that they majestically wove into the music, or the feeling of grandeur that made even the heaviest moments memorable, Dark Tranquillity have a style and feel all their own. They’ve also had a big push in recent years on the touring front, and have now taken three rounds across North America in support of the exceptional Atoma album. We caught up with Mikael Stanne for another round of Q & A before the last night of the run in Clifton Park, NY to talk line-up, home brewing, and a look back at Damage Done and Character.

Dead Rhetoric: I know this the last date of the tour, how do you think it went?

Mikael Stanne: It’s been awesome. Everything has been really, really good. I expected it to be good, but it has surpassed my expectations. We’ve toured with Ominium Gatherum many times before, but the Moonspell and Amorphis guys we have only met through festivals and things like that where we played together, and getting to do this whole tour has been incredible in getting to know all these great people. The shows have been incredible, and the turn outs have been great. It’s been super smooth, with a great atmosphere. It’s been a lot of fun!

Dead Rhetoric: Chris [Amott] has been with you for a few runs now. Is he basically on call when you come to the US?

Stanne: He’s been playing with us in Europe and festivals as well. He’s going to stay.

Dead Rhetoric: So is Niklas [Sundin] more or less on for the writing part and Chris is playing the shows?

Stanne: Yeah, that’s what it looks like right now. We haven’t decided anything final yet, but I think that’s going to be the case.

Dead Rhetoric: This is your third time over here supporting Atoma, are you reaching the point where it’s time to start thinking about writing a new one?

Stanne: Yeah, I think so. We have some shows to do this year, and then in March next year we are going to do a tour, but other than that we have some time off to relax and get back into the creative mode again. It’s going to be good – I’m looking forward to that.

Dead Rhetoric: You’ve had the video projection screen on the last few tours too, what do you feel it adds to the overall performance?

Stanne: I think Niklas has done such a fantastic job in animating and making these visuals for all the songs, and it’s something we started doing about 10 years ago and we developed it more and more, upgrading the equipment/projector/etc as we go. It just looks better and better. Especially here [the US] where there are not as many lights. We don’t travel with a light guy in the States, only in Europe. Then the projector really makes up for the lack of lights I think. It adds a lot. It’s weird when we don’t have it. In some venues we can’t put it up, and you almost feel exposed in a way [laughs].

Dead Rhetoric: What do you recall about the times that Damage Done and Character were released in terms of the band?

Stanne: Damage Done was pretty special I think. We had toured a lot for Projector and when we did that album, we wanted to get away from the death metal aspect of the band and do something else. So Projector, and then Haven, became these more mellow albums. But after all of the touring we did, we felt it was time to get back into the heavier and faster stuff. That’s kind of how Damage Done came to be. I remember that it felt good coming back to something you are more comfortable with. The experimentation is fun and it’s challenging and interesting, but sometimes going back into what made you go back and do this again was really great.

Damage Done was also the album that opened up a lot of doors for us in terms of touring. That was actually when we started to tour over here, back in 2002. With Character, that was a continuation of that – taking all of the lessons that we learned from touring all the time. There are some heavier sides to Character than Damage Done, but it’s also an album that has a few staples – we have to play a few from that one every time.

Dead Rhetoric: With your home brewing, what do you enjoy doing – what beers do you like making?

Stanne: I’ve tried a lot of things – I’ve made saisons, IPAs, stouts, wheat beers – for me it’s just interesting to try a new style that I haven’t done before. There’s a few beers that I keep doing over and over again because I’m quite satisfied with them but other than that, I want to make something new every time. Normally, a friend and I start looking at what we want to do and come up with something crazy. We have a nice brew day and go for it – I love it. It’s a fun hobby that also gets you drunk [laughs].

Dead Rhetoric: Do you find it hard to do that when you are on the road so much?

Stanne: Of course – it’s frustrating. But at the same time, I’m okay with it. I look forward to coming home and brewing some new stuff though. I brewed something just before I left that I hadn’t tried yet, so that will be fun. There’s some more that’s still fermenting too.

Dead Rhetoric: I know there was something you were going to brew with the In Flames guys. Did you get to do it?

Stanne: Yeah, with Daniel [Svensson] and Peter [Iwers]. They have a brewery called Odd Island Brewery. I did a red ale together with Daniel. It was my recipe but he brewed it. That was fun. It was for a beer festival. I’m hoping that we can do it again – we have some plans to do something again. Our Dark Tranquillity beer is coming out in a few weeks in Sweden too. It’s fascinating to get to do all of this. I know a lot of breweries in Gothenburg. You get to know the brewers and eventually they ask about doing something together. It’s profitable for them because they are using our name and I get to do something fun. It’s pretty sweet!

Dead Rhetoric: So have been touring the globe for quite a while. Do you feel it keeps you younger?

Stanne: Of course – it’s kind of like a teenage dream. You get to travel the world, meet people, and go to metal shows. It keeps you immature I guess [laughs]. But in the coolest way. We have ridiculous amounts of fun just seeing the world and hanging out. You age yourself because you don’t sleep so well and you might drink a little too much but I think it helps me stay young.

Dead Rhetoric: Do you feel that time in music has also changed you as a person?

Stanne: Yeah, I don’t know in what way, but since I started doing this when I was 14-15 and haven’t done anything else. So everything around me has changed but the band has stayed the same. You also get an appreciation for travel and for different countries and cities you get to see. You meet people all over the world, and that’s one of the best things for me. That’s my big takeaway apart from the shows themselves.

Dead Rhetoric: Do you feel that there has been different eras of the band, based on changes within your music over the years?

Stanne: Yeah, we were very different when we started out. We were young and wanted to experiment and find our sound. We tried to get away from it with Projector and Haven, but in coming back to that stuff after that, it was different as well. I think all of the albums are different in their own right. For us, it’s important to let go of everything we have done before and start fresh with every album. Doing the same thing over and over again is no fun. That’s the hardest part – to come up with something you feel is fresh. It’s a matter of perspective; how you write or the method of writing, or what sort of mood you are in, or what life is like at that point. I can go back to some of the old albums and relive what I was feeling at the time. It’s sometimes difficult but it’s a good lesson to learn.

Dead Rhetoric: You had mentioned about a little more touring and writing. What else is concrete at this point for going into the rest of the year?

Stanne: Not much at all. We have a few festivals this winter and then we are going on tour in March. Probably Russia, China, and Australia but not much outside of that. Festivals in the summer of course. We’ve been touring insanely for this album.