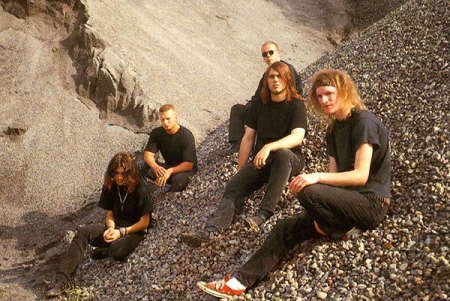 We’ll call this little bit “The Swano Five,” although five albums don’t quite do the man justice when taking into account how many critical albums he’s been involved with. However, the below five are mandatory in their own right, specifically the Edge of Sanity pair, two bodies of work that helped re-define the stagnate Swedish death metal scene in the mid-90’s. In fact, listen to any Joe Schmo melodic death metal band now and chances are, Edge of Sanity beat them to the punch two decades ago. Swanö’s candid comments follow ours…

Edge of Sanity – Crimson (1996)
A singular 40-minute long song, the reported approach to writing this album was that Swanö would come up with a riff, take it as far as it could go, then add another part. As unorthodox of an approach as that sounds, it made the album undeniably unique in 1996, but also showcased EoS’s broad melodic feel, where no less than a dozen towering melodies rain down on the listener throughout the song. Clearly the band’s highest hour, Edge of Sanity was never the same after this…

Swanö: You screwed up your career, but you saved it [laughs]. I didn’t want to make a Prugatory Afterglow Part II, because there’s no point in that. After being completely infected by Opeth’s Orchid record before anyone else ever heard it because the album was done a year before it was released, I said I wanted to do it like they did it. But instead of a bunch of 15-minute long songs, I want one song without any traditional structures and just say, “Fuck off!” The other guys said, “That’s weird, but let’s do it.” And Black Mark was like, “Oh my God, what’s going on?” Then we were like, #1 in the sales charts for five weeks.

Edge of Sanity – Purgatory Afterglow (1994)
Feeling boxed in by the surplus of like-minded death metal bands, Purgatory Afterglow was the first legitimate “song-oriented” album of its kind. The songs were paired down, but not considerably (see: “Twilight,” “Silent”), while Swano’s volleys from growls to soaring cleans pre-dated the whole good cop versus bad cop movement by several years.

Swanö: I think Purgatory Afterglow for me, the point where I felt I could do it alone. I wrote all of the songs but one, and we did one song (“Silent”) the night before we recorded and no rehearsal was made. I taught the band how to play it piece-by-piece and I felt this is my thing, and they are here because they have to be. With Crimson, it was all a different way of creating, but then going to Infernal, I thought “Fuck, we cannot go back to doing this.” At that those times, I did my guitars, vocals, and bass, and you guys do whatever you want and we’ll see what happens.

Dan Swanö – Moontower (1998)
Press clippings had Swanö saying this would be how a death metal album would sound if it were recorded in the 70’s, Moontower was the Swede’s first true solo offering. With riffs not too distant from Crimson, and the growls still in check, Swanö showcased his love for 70’s rock, with plenty of synthesizers and beefy arrangements, with luscious numbers like “Add Reality” and “The Big Sleep” leading the way.

Swanö: I wanted it to be completely dry and no reverb and only ancient technology. I tried it, and it sounded like a really bad Sunlight demo [laughs]. I just took the good parts with the keyboards and the rest was updated to now, 1998. I wanted to be outrageous and strange, and I love the album. It’s super-cool. It could be re-released; I think the world is ready for it, but I think it’s horribly gone.

Bloodbath – Resurrection Through Carnage (2002)
The second full-length from what was started merely as a fun, drunken side project, Bloodbath’s Resurrection Through Carnage had the tidal wave of Swedish death metal revisionists beat by nearly a decade. Joined by Katatonia members Anders Nystrom (guitars) and Jonas Renkse (bass), along with Opeth vocalist Mikael Akerfeldt, Swanö was in charge of laying down the drums and keeping the “true” aspect in check. For the most part he did, only for the lineup to fizzle out in a matter of years…

Swanö: “Sell-out,” that’s the first word. The guys were like, “We had such a success with the mini-album, let’s do a full album.” I said “Fuck off, there’s no way that’s going to happen!” I wanted to be prog rock at the time, but I got to thinking, it was 10 years ago then, that the Swedish death metal started cooking, so we must pay tribute them. Then I was 100% on board, but it can only be a Swedish death metal album. No clean singing, no Yankee death metal, and the guys were into it. That was it for me with Bloodbath. We did what we should.

Nightingale – I (2000)
Arguably Nightingale’s career highlight, I demonstrated the songwriting ability of Dan’s brother Dag, who took over the songwriting reins after The Breathing Shadow and Closing Chronicles albums. Leaning more on the progressive rock side of the fence, Nightingale still had Dan’s clean vocals to work with, with the balladry of “Alonely” and straight rock of “Still in the Dark” and “Dead or Alive” serving as some of the band’s most accessible and melodic numbers in their catalog.

Swanö: When I hear this record, it took a lot of time for me to get it right. I converted from normal gear to digital, and my brother told me he had 50 different mixes of “Starved for Life.” I was just trying to re-learn the whole thing, but inside a computer. At the end of the 90s, computers weren’t really that powerful. It sounds crap, but there’s some really good songs on that record. I like the darkness of the last songs and it’s bringing me back to the vibe of Witherscape. It’s uncomfortable to listen to in the dark.