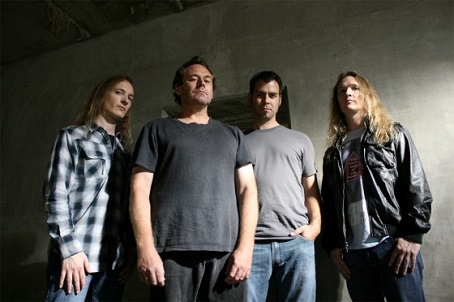 Dead Rhetoric: DeEvolution and ReEvolution are the first two parts of a dystopian trilogy. Explain to the readers the challenge of keeping an interesting story line with the lyrics while also maintaining separation from song to song?

Erik Rosvold: Keeping a storyline together within the constraints of a 45-minute album is challenging. Actually, you probably have just 30 minutes of vocal time to tie-up loose ends in order to make the narrative flow. I come up with the melody first, which to me is the only way to go about it. I can kind of tell when someone wrote the lyrics first and then they try to force it into a song; sounds awkward. So, there is a lot of self-editing where I try to fit in as much storyline as possible. That being said, on our site (http://www.cynthesisband.com/) there is a breakdown that attempts to solidify it all.

Just to clear this up, we are working on a third album but they will be individual songs. So the idea of a trilogy is a misunderstanding. Sorry if there was confusion about that.

Dead Rhetoric: Another aspect you’ve always been conscious of with Zero Hour, Cynthesis, and Abnormal Thought Patterns has been keeping the length of your albums around the 40-45 minute mark on average. Why do you believe other artists push the parameters and release 60-70 minutes of music per album, when there’s so much to digest in progressive metal and you risk listeners leaving an album unfinished due to boredom?

Tipton: Every band is different when it comes to this and it’s hard to explain. For some reason the material I write just seems to finish around that time. I grew up loving albums like Rainbow Rising which clocks in at 33:28, Pink Floyd –Wish You Were Here 44:28, Jason Becker Perpetual Burn 42:01. Now to be fair there are a few albums I dig that are over 50 minutes and I have to add the new Steven Wilson at 54 minutes is amazing. Most of the full-lengths I dig are usually 45 minutes or less. In the end it’s the artist who knows how much material they want to express to the listeners.

Dead Rhetoric: You recently visited your brother and father out in Moscow, as Troy now teaches music in Russia. What were your impressions of the country, and how important has family been when it comes to the development of your music?

Tipton: Moscow is awesome in my book and they love their metal music. Easily some of the best fans I’ve ever seen. I really enjoy my time in Moscow and look forward to going back. My brother and I grew up in a house where music was being played 24/7. My father is huge into Elvis, James Brown and Motown material. My Mom was the rocker with Pink Floyd, Hendrix and Zeppelin. Plus my mom really enjoyed jazz musicians such as Pat Metheny, Dave Brubeck and Bill Evans to name a few. My grandma was a famous lounge singer in New York who sang with Frank Sinatra back in the day. My grandfather played bass in a big band. Troy and I would seek out music from new acts and bands of the past we weren’t aware of. When we heard “Stargazer” from Rainbow Rising, that (song and album) sparked us to want to play instruments.

Dead Rhetoric: Where do you view the state of progressive metal in 2013? Are you happy with the number of festivals building in North America and abroad- as well as the increased exposure through a number of press, promotional, radio, and social media platforms?

Dead Rhetoric: If you had the chance to run your own guitar clinic/ symposium, name five players you would want to invite and what topics do you think need to be discussed?

Tipton: Pat Metheny, David Gilmour, Gary Moore, John Sykes and Ritchie Blackmore. That’s tough because I would love to have Jason Becker, Shawn Lane, Neal Schon, Stevie Ray Vaughan and Joe Pass in there as well. I’m a fan first so I would just say play and don’t stop. That would be awesome!

Dead Rhetoric: You’ve also mentioned an interest in film scores that fuels some of your creativity. What have been some of your favorites of the past 10-20 years? Would you ever add film/ television scoring to your cache if an opportunity sprung up?

Tipton: A song I wrote called “Falling from the Sky” was used for a scuba DVD which was very cool. Some of other artist on the DVD was Neal Schon and Craig Chaquico which is great company to be in. A couple of my songs gained involvement in a very large chain of hotels overseas. So I’ve had some activity. I would love to do film and television scoring and you never what can happen down the road. The first real film-score CD I picked up was Falcon and the Snowman. It’s an amazing score from the Pat Metheny group and I’ve always been drawn to it. The Gladiator soundtrack by Hans Zimmer is amazing. I love groups like Conjour One who have that film score vibe. I’m a guitar teacher at Allegro Music and Lyle Workman use to teach there for many years. He’s now one of the very high priority scoring musicians out there.

Dead Rhetoric: What does the future hold for Cynthesis and Abnormal Thought Patterns in the next 12-18 months? What’s left for Jasun Tipton to accomplish on his musical or personal bucket list?

Tipton: Yeah it’s an exciting time and I want to enjoy it. We have three videos coming out for Abnormal Thought Patterns. Wayne Joyner is putting these together and they look AMAZING! After we get some press together for Abnormal Thought Pattern we’ll look into a booking agency for Europe. I wrote and recorded the third Cynthesis disc over a year and a half ago. Erik has the material and getting some listens in. There’s a small documentary being put together for ReEvolution, as well as a video being put together for “The Most Trivial Pursuit.”