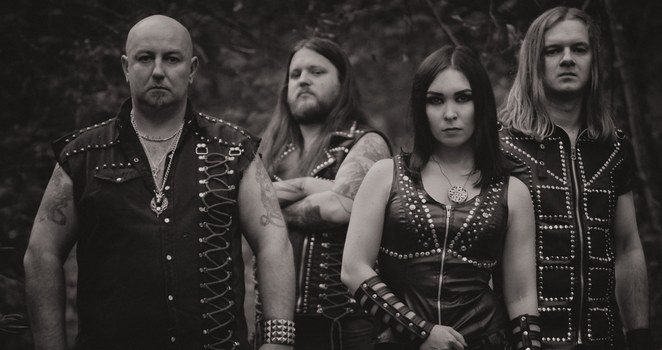 Dead Rhetoric: Which do you prefer at this point in Crystal Viper – recording in the studio or performing live on stage?

Gabriel: Recording in the studio and playing live are two very different things. But, they cannot exist without each other. To play live, you have to record the album first, and songs that will be performed everywhere. I love the process of composing music, the lyrics, and afterwards recording in the studio. I’m very open about recording an album – I have flashbacks when I’m recording, I remember the moment where I sit with my piano recording a demo and then think about how it will be recording this material in the studio. I know it’s crazy, but this is how it is. After that playing live, it’s totally different. There is a discipline required in the studio, there are no rules while playing live. You just go on stage, it’s like being in a second dimension where there are people in the crowd and you are on stage, and nothing else. No problems, no job, all of those issues that make you nervous or unhappy – there is just the music and the positive energy. Exploding emotions and so on, I love playing live. I can’t say what I prefer more- I enjoy both, this is what I really love to do. Even if I have to record a cover song tomorrow, I love going to the studio with my band, and the same with live shows. You look forward to upcoming shows.

Dead Rhetoric: Being a fan of heavy metal in addition to performing, what would you consider some of your top albums of all time and maybe favorite performances that you took in as an audience member?

Gabriel: Well, I remember last year or two years ago, I saw Saxon in Glasgow or Edinburgh, Scotland. Wow, those guys on stage are so alive, it’s amazing. When you are playing live you are receiving an energy from the people in the crowd, when you are in the crowd you can also receive that energy and get it back from them. And Saxon, they kick ass live. I also remember Iron Maiden in Warsaw, Poland. I totally loved them, that was my first time seeing Iron Maiden, and I will see them in two months again as my husband and I are flying to Scotland again to see them. I really can’t wait. One other live show that I remember enjoying was Hammerfall in the Czech Republic at the Masters of Rock Festival, in the winter. That was a long time ago- about 11 or 12 years ago. They played fantastic.

What about albums… for sure some of the Judas Priest and Black Sabbath catalog.

Gabriel: You know, you cannot compare the Tony Martin-era to Ozzy and Dio because his style of singing is totally different. He never tried to copy either one of them. I totally love his way of singing, he’s one of my favorite vocalists of all time. I love how he operates, there are so many emotions when you are singing to Black Sabbath with him on vocals. I can listen to those albums on and on. I like Black Sabbath with Ozzy and with Dio but with Tony Martin, these are my favorite ones for sure.

Dead Rhetoric: You also have a clothing company Thunderball that makes stage clothes for acts like Vader, Sabaton, and Wizard among others. Do you come up with the designs yourself, or is it a collaborative process with the bands? Do you also believe imagery and specific stage gear conveys significance in the metal realm today?

Gabriel: Yes, everything I do in Thunderball clothing I do myself. It starts with the ideas for the designs, and after that I sew the costumes myself. Sometimes when bands are contacting me to get some outfits they have a hint of what they would like to have, but after that I’m always the one who makes the design. As far as clothes on stage, from the very beginning when I started playing and singing in bands I wanted to look on stage extraordinary. I always thought that I shouldn’t go on stage dressed like I was eating a dinner with my parents. I wanted to look different, fringes and stuff- this is actually how Thunderball clothing started because I started to do clothes myself because I couldn’t find anything in shops that I liked myself back then. So, I started doing it myself, I love running my own clothing company. It’s fantastic to create clothes for other bands and then see them on stage wearing them, it’s really great.

Dead Rhetoric: What are your views on the state of the world today? What concerns you the most for the future?

Gabriel: I would say that there are horrible things that people are doing to nature. I’m afraid that one day we will die under our own trash. This is a horrible vision, really. We don’t respect nature and I hope that this will change one day, because we cannot go on for a long time with how things are right now. Many people don’t understand this right now, and that is sad.

Dead Rhetoric: How do you see the rest of 2017 shaping up for the band – as you’ll be touring Europe with Bloodbound, are there hopes to get into new countries/ territories, maybe even possibly doing some festival dates in North America?

Gabriel: Well, sadly there is no America in our schedule yet. I strongly believe though that this will change, some dates for North America may show up next year. For now, we are focusing on playing this upcoming European tour which starts next month. We’ve also booked summer festivals, I hope we will play as much as possible this year, especially after this long break. Believe me three or four years off for a band like us it’s way, way too long. We’ve always been a band that is still doing something, when we weren’t playing we were recording something, and so on. This break was really killing us, so we are very hungry to play and we will do as many live shows as possible this year.