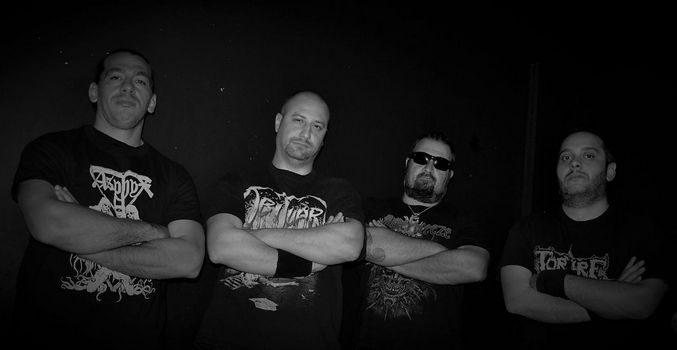 Remember when thrash in its infancy wasn’t about smoothness or catchiness – but purely unadulterated energy and intensity, taking outside influence from the New Wave of British Heavy Metal, punk, and hardcore to that next level? Well, Italian band Cruentator certainly do – as their debut album Ain’t War Hell delivers slightly over a half-hour of that abrasive, old school songwriting and performances that will leave listeners dripping in sweat and fatigued in the right way. Rather than take influence from the Bay Area troops, this set of musicians dig deeper into many unheralded or relatively obscure bands who were unrelenting in their platforms – Demolition Hammer, Sadus, Invocator, Sacrifice, and Morbid Saint to name but a few.

Reaching out to the band, drummer Riccardo and guitarist Omar handled these questions. You’ll learn more about the development of the band which differed from many members gore band roots – their views on the specific influences that spark their sound – and how they feel being a part of the Xtreem Music roster beyond their future plans.

Dead Rhetoric: Tell us about the genesis of Cruentator. How did two members of a brutal gore band like Bowel Stew feel the spark to begin in a war-obsessed thrash band – and how were you able to secure the other members to start the group? And how did you come up with the band name?

Riccardo: We started Bowel Stew in 1996 and, after a pretty long career in the brutal death and goregrind underground scenes, we decided to start a new project. Thrash metal was the first genre we approached when we began to listen to extreme music, so the choice was easy: let’s start a thrash metal band. (Vocalist) Ambro is a long-time friend and he had played in Bowel Stew too. We offered him to join the band as the singer and he accepted. Ale, another friend of ours, joined the band as bassist, but he left after one year; he was replaced by Vanni, just in time to record our debut album. Then Omar decided that a second guitarist would have suited the band’s sound, so he asked Massi to join us.

Regarding the band name, one of the Bowel Stew songs is called “Cruentatio Cadaveris”. It is a medieval method of finding proof against a suspected murderer or a witch. It is mentioned in the Malleus Maleficarum: the belief was that the body of a victim would spontaneously bleed in the presence of the murderer. Since Cruentation sounds too death metal, we decided to add the Latin suffix -or that sounds thrashier.

Dead Rhetoric: Your debut album Ain’t War Hell was recorded in 2017 and recently came out on Xtreem Music. How do you feel the recording sessions went for the record – any surprises, setbacks, or changes come up that you had to work through, and what are your thoughts on the overall outcome?

Riccardo: We wanted an old school sound and we’re very satisfied with the result and production. The recording sessions took us a couple of weekends. Our aim was to revive the 80s and early 90s sound. We wanted it and we got it. That vibe and spirit came naturally, because we all love old school thrash metal.

Dead Rhetoric: Cruentator stylistically sit in a specific time period of thrash during the mid-1980’s to early 1990’s that almost crosses over to early speed/death lines – using influences from bands like Sadus, Demolition Hammer, Morbid Saint in addition to more well-known acts like Kreator, Sodom, and Nuclear Assault. What about that particular era of thrash excites and inspires you – do you feel that it’s underrated and a bit more challenging to play because of its aggression and speed?

Riccardo: Thanks to our long-standing experience playing fast, aggressive and extreme metal genres such as brutal death and grind, switching to thrash was effortless in terms of speed. What I love about the golden era of thrash, both European and American, is its genuine attitude and its violent spirit. Thrash metal doesn’t need ultra-technical song structures, super high quality digital production and tons of blastbeats to be brutal. The aggression in extreme thrash metal comes from its roughness and ferocity. For example, bands like early Kreator, Slaughter, Incubus and Devastation, just to name a few, had this vibe I’m talking about.

Dead Rhetoric: How would you describe Cruentator when it comes to your live performances? What do you hope the audience is able to get across through your stage show and delivery?

Riccardo: We always try to play live as close as possible to the album sound.

Dead Rhetoric: What can you tell us regarding the cover art for the album? Did you give the artist free reign to develop a concept, or did you work as a band hand in hand to achieve what you wanted?

Riccardo: We knew Five Miligrams because he had painted some killer artwork for Possessed, Morbid Saint and Massacre. We sent him our lyrics and a preview of the album, in order to develop a war-inspired cover artwork with a gory touch.

Dead Rhetoric: How does the band handle the ever-changing business model of music consumption while trying to establish a fan base as a newer act? Do you believe in the value of social media and instant technology to interact with the fans and develop lasting relationships through the mutual love and admiration for metal?

Omar: Yeah it is cool now you can chat with Glen Benton if you like and you can reach your metal heroes very easily by mail, by messenger if you want it is really cool!

Dead Rhetoric: What do you believe are the biggest challenges that Cruentator faces currently? What types of goals do you set for yourselves say over the next six to twelve months, either personally or professionally?

Omar: Well as long as we play for passion we don’t look for great goals, but it was a challenge for us to make a good album in terms of quality and to have a good impression for the old school maniacs, hopefully we got it. For the next months, I see us playing gigs and having fun, and hopefully taking part in some nice festivals all over Europe why not?

Dead Rhetoric: What concerns or fears do you have about the world that we live in now? What do you think people need to focus on to make the world a better, safer, or friendlier place in the coming years?

Dead Rhetoric: Could you let the readers know about the other side projects/bands that you have going outside of the work within Cruentator – and how do the members juggle all the activities, do certain bands take priority over others?

Omar: Well we all had and still some of us have other bands. Riccardo and myself still play in Bowel Stew and even if we are concentrating with Cruentator we still have some new ideas that probably soon we’ll start to work about. Massi F.D. has his black metal band called Rabid and still manages the two bands very well. Vanny has his rock project too and myself I play with Mindful of Prypiat since a couple of years ago.

We try to not superimpose our engagement with the other bands with Cruentator and it is going well at the moment. Cruentator has the priority, we have a bond with the label and we wanna respect it until the end in the better way.

Dead Rhetoric: Where do you see the state of the heavy metal scene on an Italian as well as a global level? What changes (if any) would you like to make to improve the market place?

Riccardo: Digital tools are helping bands to reach more people, to grow and to be known. On the other hand, I prefer music in physical formats. If I like an album, I’ll buy it. The underground should come back to its origins and it means: buying CD’s, tapes and vinyl or trading stuff with other metal maniacs and distros.

Dead Rhetoric: What would you consider in your top five albums of all time, either for heavy metal or the thrash/death sub-genres? And what are some of your favorite concert memories of shows that you’ve seen and experienced over the years?

For the concerts that I’ve seen over the years, the first one was with Malevolent Creation, Vital Remains and Infernal Majesty: a killer trio! Some of the best live bands I’ve seen are: Cannibal Corpse with Jack Owen, Deicide with the Hoffman brothers, Iron Maiden, Slayer, Brutal Truth, Morbid Angel with Pete Sandoval, Eric Rutan and Steve Tucker, Saxon and many others.

Dead Rhetoric: What does the future look like for Cruentator to support the debut record? Has work already begun for songwriting for the follow up effort- and if so, how do you think this material is turning out in comparison to the debut?

Omar: Well we are very satisfied about our signing with Xtreem Music and we know Dave Rotten is making good work concerning promotion and distribution, I am sure it will go very well! What we can do to support the records is play around and try to promote it in the field!

Yes, we are working on new material, and for sure there will be not a change of style. It will be as thrashy as the debut – maybe more well-constructed, considering that the first album is born out of good fun. And when we saw that the songs came out naturally (as) we worked on it, as long as we didn’t have any accord with labels. Now we are more motivated and for sure we’ll try to make a good (product) never forgetting that thrash has to be raw, powerful, and aggressive without compromises. 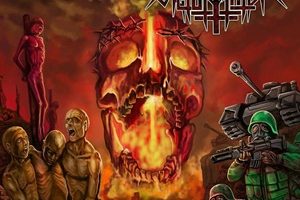