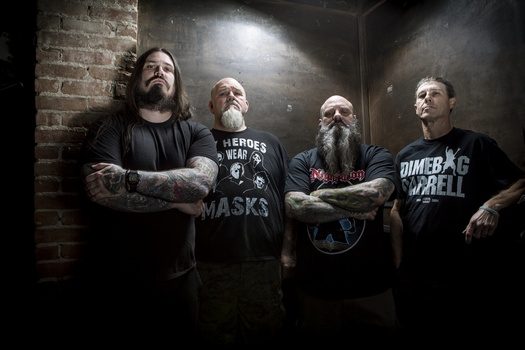 Dead Rhetoric: Do you believe veteran bands like Crowbar are in an advantageous state when it comes to the recording technology advances because of the amount of discipline and practice it took in the analog days to get things right, especially at the expense of larger recording studios?

Windstein: Nowadays, we use Pro Tools – but I still feel very old school in the sense of telling people to rewind and let me do it again. Some bands literally do the verse and fly it in the rest of the song, the chorus too. The only time we fly anything in is if my voice is totally getting shot, I’m tripling every vocal line, there might be a chance to use the vocal from the second verse on the third verse because I’m done for the day. I’m not going to wreck my voice for another hour – other than that, technology-wise, things are a lot quicker. I can remember doing records where everybody’s hands were on the console doing fade outs, all at different levels.

I read a thing with Ace Frehley, a couple of years ago when he did his first Kiss solo album. They were talking about how when they wanted a certain sound effect, they had to create it. It wasn’t on a sample for you to take. Like Judas Priest – the “Metal Gods” with the cutlery tray, how can they make it sound like metal dudes marching? Well, that’s how they did it. That doesn’t happen now, you press a button and you have a hundred of them to choose from.

The studio experience, I’m really enjoying it, the creative part. The thing is, I hate to say that anybody can do it, but with Pro Tools you can fix anything. I don’t like stuff that’s too perfect- it should be organic, everything shouldn’t be… there are little mistakes on all of our records. When you take out (the human element), you are a machine.

Dead Rhetoric: Being a father and now a grandfather, has that changed your perspective on life in general?

Windstein: Yes, it makes you think about getting older. You want to be around to get older. If I didn’t have a daughter, and I wasn’t married to Robin, and we didn’t have a stepson I may very well be dead by now. I really burned the candle at both ends for a long time. You can do that when you don’t have a family or any responsibilities except being on the road, on stage or in the studio. It saved my life and gave me a great outlook on the future.

Dead Rhetoric: Do any of your children have any inclination to be a part of the music business?

Windstein: Not really. My stepson, he’s into more hip hop and stuff. And his dad, who I have been friends with since the 1980’s and I have known as long as Robin, he’s a really good musician- in fact I am borrowing his bass right now for some studio stuff I am doing. I bought (my stepson) some studio monitors and they are building a studio, so he’s into hip hop. My daughter loves music, she takes dancing and has no interest in playing music. She likes theatrical stuff – she would rather be an actress versus being a musician.

Dead Rhetoric: What have been some of the best fan encounters that you’ve had in your career – either related to specific songs you’ve written that touched people in ways you couldn’t have imagined, or related to certain shows/festivals you’ve played?

Windstein: Seeing the fans in places like Russia and all that literally crying. It’s very deep. One guy in England pulls his shirt up and he’s got all the lyrics to “To Build a Mountain” on him- all the tattoos that people have with Crowbar that they want us to sign. That’s the same thing I do with my bands- I have Trouble, Saint Vitus, Saxon on my body – I have Motörhead everywhere. There isn’t a day that goes by that people don’t write me, message me, or tell me – especially at shows, people tell me that my music has stopped them from killing themselves. That really has you take a whole new look at life. The music and the lyrics are actually helping people, it’s therapy for them. You can be proud of what your doing, and it’s actually positive in so many ways.

You see it everywhere on commercials and advertisements, but music is a voice for the whole world. I can listen to a band from any country in the world and enjoy their music, even if it’s in another language. Music is the universal thing, if you are a music fan, it’s everywhere. When I was in my bedroom learning how to play guitar, I never imagined in a million years I would be playing Russia and things like that. I’d like to go to a lot more countries.

Dead Rhetoric: What are some bad recommendations that you hear within the music business?

Windstein: I see a lot of bands doing things that I believe is the wrong approach. It’s really hard to pinpoint one or a few things in particular. I think, in general with the whole music industry that has changed is the younger bands or local bands have absolutely zero respect for the touring acts. When we opened for Anthrax in 1985 with my metal band, you better believe we did whatever the stage manager told us what to do. It was just a dream come true for us to be opening for one of our favorite metal bands. There are literally bands out there, like last night- and I don’t know which band it was, but they told us we could keep the drum kit up, and then they start throwing it all around. I would never touch anything – to this day, if it’s an opening band with a 17-year-old kid, I’m going to ask if it’s okay if I move gear from a touring band on stage. The respect is gone- they all think they’ve made it, or everybody owes them everything. It’s the general attitude within young people these days. But it’s baffling sometimes when you walk into your dressing room and there’s a local band drinking your beer, eating your food, sitting on your couch.

We had respect, even for the bands that we opened for within our local area – Zebra and Lillian Axe who went onto major label contracts – and we became good friends with those guys. Even before they were on a label, they were still bigger than us- and we did what they told us to do. Not every band, but in general you see it in a lot of us. One of the things that really pisses me off is when the local band is supposed to be on at 7:30, and then it’s 7:35 – okay guys, let’s go on. They tell us their drummer is down at the bar or whatever, they try to push the show back and what it does is it pushes the headliner back during the week to where you are going on so fucking late that your fans have to go. People buy merch, drink some beers, hear a couple of songs and have to go home as they have to get to work the next morning.

The younger bands that do have respect, and every band from my era had that respect- if you didn’t, you wouldn’t be asked to play. We’ve always had a good reputation for treating the bands that we tour with, whether we are an opening act or someone is under us- we try to treat them with respect and help them out as much as possible. That’s the biggest thing missing today. I had a kid in San Diego a while back during a Crowbar tour come up to me and say, ‘hey man- it’s cool to be jamming with you all tonight. I am going to let you know, we are hot around this area- so watch out!’ I’m like ‘okay’… you are a local band, never to be heard from again, and you are going to tell (us) that I better be scared because you are going to blow us off the stage. That’s the example I’m saying. You don’t blow away a band- you blow away a crowd. Because it’s different types of music. If we play with Hatebreed, some people will love it, some people will hate it. Hatebreed toured with Type O Negative – and they faced the same thing. A lot of the goth chicks were there to see Pete, and left.

Dead Rhetoric: When it came to the Beavis and Butthead exposure, did it help the band despite the fact that you were being made fun of?

Windstein: It did help. The thing is, we sent a master package to Mike Judge. A t-shirt, a letter, a master video thing ready to be played, we were big fans of the show. We know they will make fun of us for being fat- fat, bald dudes. We wanted to be on the show, it’s a classic show. We knew there were going to be jokes, but as long as it’s not like they suck, we were fine. We were on two episodes, and there was a third episode where one of them was trapped in a box and they said, ‘why don’t we get one of those fat guys from Crowbar to break him out!’ (laughs). In the Beavis and Butthead dictionary, it says Crowbar- four fat dudes (laughs). Two of the guys in the band were not fat at the time. I’ve always been the class clown- I make fun of myself all the time, that’s just a part of my personality. I have thick skin.

It did do a lot. There’s rarely a day that goes by that somebody doesn’t talk about us being on the show. So it worked.

Windstein: A lot of touring for the rest of this year. Trying to do a new record around the end of the year. Around the first of the year we should be ready to hit the studio. I’d like to start writing as we have a few breaks, Matt (Brunson) and I get together so we can start writing. It’s been since November of 2016, and it will be around 2 years and we can finish up the remainder of our touring cycle to get back into the studio.