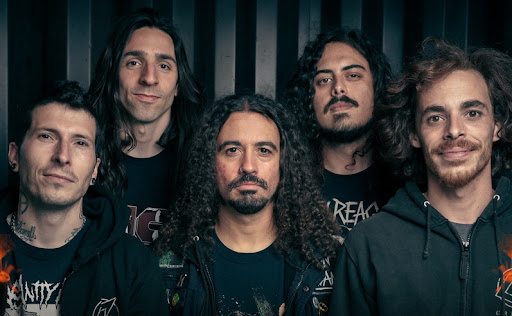 Continually impressing audiences with their brand of thrash since their start in 2008, Spain’s Crisix have been climbing up the ranks through their energetic records and powerful live presence. During the downtime from the pandemic, they have released a fun-loving EP entitled The Pizza, which showcases a humorous/fun side of the quintet without sacrificing the aggression, hooks, and slamming abilities they deliver.

We reached out to vocalist Juli Bazooka who brought us up to speed on the origins of this EP, the special promotional tools they implemented to get the word out on this effort, how the recent tour went and fond memories surrounding their career. We also get insight into a scary show situation in Morocco, favorite hobbies/passions, and plans for the next album.

Dead Rhetoric: The Pizza EP is the latest offering from Crisix. Tell us about the idea behind this short yet potent record – and why do you think this specific food group has always gone down well with thrash metal?

Juli Bazooka: The idea was to bring back the vibes of the old EPs like Garage Days, Haunting the Chapel, that old format that we love. The thematic element started off kind of as a joke, our guitarist BB Plaza used to work as a pizza delivery boy back in the day when we first started. He told me many, many times he would love to do a song about his days doing that, he had plenty of antidotes. Then we decided that would be the main topic of the EP.

Dead Rhetoric: You’ve done special promotion regarding this new release – including pizza parties, a comedy act, special food items, and a cookbook. What has the reception been like, as I’d imagine you were able to gain further reach outside the normal realms of metal promotion through these partnerships?

Bazooka: We thought about doing this stuff, especially because during this pandemic we had a lot of free time to think about a lot of things. We did a presentation with the cinematic experience here in Spain, in Madrid and Barcelona, and the response was very, very good. Especially here because we have a lot of restrictions with live shows. Doing something like this, and we did a comedy show, we were helping people forget all the shit that is around for a moment at least. It was a great experience; we were super happy with the results and the reactions.

Dead Rhetoric: You are finally back on tour after having a prolonged absence from the road due to the COVID-19 pandemic. How has the reaction been to these latest shows – do you believe there will be a newfound appreciation and resurgence for live music because of this long withdrawal from the fans as well as the bands?

Bazooka: It was super amazing to be back on stage. Imagine being off stage for a year and a half, maybe more. We did a few shows with people sitting down, and even a show at home for Hellfest without the audience. It was a great show, but a bit strange without people. Coming back after all this time was great. We could see this with the people – we played in the Netherlands, Belgium, Germany, Czech Republic, Austria, and we spoke with a lot of people. A lot of guys told us after the show that this was their first show since the pandemic, thank you very much, they were going to remember this forever. We had a great time.

Without the normal audience, everyone had to show up with a COVID-19 passport. Once inside the venues, people really enjoyed the shows in a way before this pandemic situation. We felt like, okay it’s finally back.

Dead Rhetoric: How do you look at the development of Crisix now with four studio albums, the special American Thrash cover record, and the variety of tours/festival appearances you’ve made across Europe, the Far East, and the USA? What are some of the special moments/memories that come to mind when you knew Crisix was making a move up the ranks in terms of popularity and appeal?

Bazooka: I have a lot of good memories. Especially from the first days when we were rehearsing every single night. We were so young, and we had this energy. When you see this in retrospect, we did all that we could do, and we are so proud of what we’ve accomplished. We have a lot of good memories, from Japan, Latin America, even from Morocco as we played once there. Europe. We have met a lot of great people, great bands. And there will be more to look forward to, for sure.

Dead Rhetoric: Where do you see the major differences in the current generation of thrash bands that have developed over the last ten to twenty years versus the original generation that came out of the 80’s/90’s scene? Do you believe more people accept the variety of sub-genres now within thrash, or are even more critical than ever regarding what they expect?

Bazooka: You can find people with different opinions, of course. Nowadays, you can see people that are super open-minded. They can listen to thrash, then hard rock, then heavy metal, death metal. Elitism, I think it’s one of the worst things about (the scene). There are a lot of interesting new bands, and more are coming. The scene nowadays with new bands, it’s in a pretty good shape right now.

Dead Rhetoric: What do you think is most difficult for the average fan to understand about the decision making and business elements that take place within the band?

Bazooka: The most difficult thing for fans to understand is, you don’t only have to do music things – it’s not about just playing the music. You have to do social media, be a community manager, think about your merchandise, you have to be a designer. There is a lot of work behind the band that the people don’t see. It’s a tough way, not an easy way, and there is a lot of stuff that people don’t see about the hard work behind a band.

Dead Rhetoric: Were you surprised how much winning the Wacken Battle propelled the career of Crisix?

Bazooka: This was back in 2009, and imagine we were so young. We started in 2008, and this was the next year. It’s crazy, I remember the show as if it was yesterday. It was a dream that came true, you know.

Dead Rhetoric: What do you think has been some of the best advice you were ever given that you took to heart and applied to Crisix?

Dead Rhetoric: Do you believe people these days try to change things around, forcing musicians to do things they don’t want to do? Or do you see things being more open because of the tools that bands can use on their own for self-promotion?

Bazooka: Today, it’s a difficult thing to be in a band. You have to go through a lot of shit. It’s not an easy way. You have the internet where your music can go all over the world, but maybe it’s bad for the bands when we speak about the sales of the albums. It’s a difficult path to go through, but if you believe in what you are doing, it’s worth it.

Dead Rhetoric: Do you believe your consistent, high quality video work has helped propel the band as well? As you have done a lot of videos that are very entertaining over the years…

Bazooka: YouTube and Spotify are platforms that are super useful today. We have a lot of people that know our band through our videos. That’s why we think it’s super important to pay attention and release a lot of videos. It’s something we really enjoy. We did four videos for this new The Pizza EP, and they are all interconnected like a short film. People are enjoying this new format.

Dead Rhetoric: What are some outside hobbies, interests, and passions that the members of Crisix have away from music when you have the free time and energy to pursue them?

Bazooka: I’m totally into movies, and I am a cinema addict. Our guitarist Requina loves to rock climb into the mountains. Our drummer has a craft beer bar here in our hometown. Pla the bass player and BB our other guitar player are music teachers. That more or less is what we like to do.

Dead Rhetoric: How supportive are your close friends, families, and significant others when it comes to what you do with the band -is it a tough balancing act considering your schedules?

Bazooka: Well, we are supported by some, but not supported so much by others. In every single case it can be a little different. The closest people, family and friends, have been supporting us since the first days of the band, and we are very thankful. And they are very happy.

Dead Rhetoric: How do you define success for Crisix – and has the definition changed from the start of the group to now?

Bazooka: Success for me, it’s like I am doing what I want to do with my friends. In the end, we are five friends over everything. To follow a common goal when you are surrounded by your closest friends is one of the best things that can happen to you.

Dead Rhetoric: How do you think as a band you learn to handle stressful situations? Are there times where you have to overcome obstacles?

Bazooka: We are ready to face everything that is going to be in our path. And we will face it together – to the good as well as to the bad.

Dead Rhetoric: Have there been any scary situations that have happened to the band on stage playing all over the globe?

Dead Rhetoric: How is the state of the government and politics currently within your home country? We know you’ve talked about this in the past in the song “Five Against One” …

Bazooka: Here, especially with the corona situation, it’s messed up. We have played now in six countries around Europe, the restrictions are way lower. Shows here aren’t happening, and the ones that do happen in Spain are with a lot of restrictions. Social distancing, masks, not many people in the venues. In Spain, I think there are more than 70% people that are vaccinated. In other European countries, that percentage is less than Spain. Hopefully this is going to change in the next months. We need to play live.

Dead Rhetoric: How would you describe the state of the metal scene in Spain? I know you have a killer festival with Resurrection Fest…

Bazooka: Yes, we have that festival. Nowadays, we have a pretty good scene. Great bands, great festivals. I am really proud of the Spanish scene these days.

Dead Rhetoric: What’s on the horizon for Crisix for the rest of 2021 into 2022 as far as touring, festivals, etc. Will there be a new full-length in the future for 2022, considering the downtime you had over the last year and a half?

Bazooka: For the rest of 2021, we will do the second part of this European tour with Insanity Alert. This will be around Germany, Luxembourg, the Netherlands in November. And now we are recording a new album that will come out next year. Around the springtime, maybe. We are working hard. Next year for sure we will have more tours, more festivals, more Crisix for everybody. 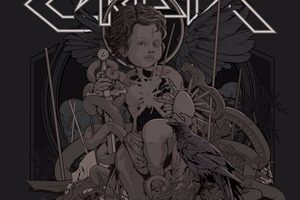