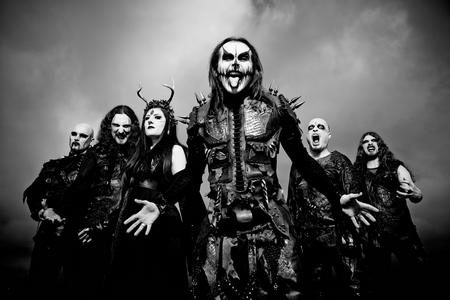 Dead Rhetoric: You switched over to Nuclear Blast –I’m assuming you would have had a number of offers on the table. Why choose Nuclear Blast going forward?

Filth: A few of my friends are in bands that are signed to Nuclear Blast. I’ve known a few people from Nuclear Blast for quite a while. It just felt right. We were visited by Markus Staiger, who’s the MD – he pretty much owns it. He actually signed my other band, Devilment, first. I suppose in a selfish sense, I was grooming Nuclear Blast to see how well they did and get to know people before making a decision. So it all added up and made good sense.

We were offered a contract by Nuclear Blast back in 1996 and I was flown over to Germany, treated a bit and hung out, and given a bit box of cds. We didn’t actually sign with them at that point, because we were also offered a deal with Music for Nations. Nuclear Blast didn’t have an English-based office then and Music for Nations housed a lot of bands that we were very good friends with. They had a good representation and they were based in London, which was perfect. Now Nuclear Blast has a very strong office, strangely enough, out of all of London, it’s just opposite of the Music for Nations building – where that used to be. But it just felt like right time now. There were a lot of different things – it wasn’t quite as cut and dry as that but it ended up a good, decisive move.

Dead Rhetoric: It’s been noted that your stage persona is much different than your off-stage persona. Is it necessary to have a more ‘larger than life’ approach to a live show?

Filth: I think it’s just something that amplifies your character. I’ve answered this question a few times and say, well yeah obviously. I wouldn’t walk around looking like that in real life, much like any member of GWAR or KISS or anybody. It doesn’t change the person you are – it just amplifies it. Again it’s mutating and surviving.

Last year, for example, we did a tour in Russia. It was a 19 date tour – really extensive and really cool as well. There was one instance, where we were to do a press conference and I was the only one who could do it. I said to my tour manager, “how many are there?” He said, “there are 6 of them.” I hate doing them but I decided to go and do it. There weren’t six, but sixty! It was TV and everything. I thought, “oh my god.” I just had to rise to the challenge, because nobody knew that I was feeling like that. All they saw was some cock-sure person going out and cracking some awful jokes to try and clear the air.

But yeah, it’s just the way it is really. Musicians tend to wear many masks and you have to rise to the challenge of it. I’m quite reclusive as a person, but at the right time…I had to present some awards recently. One at the Kerrang! and at the Metal Hammer awards ceremonies. Again, that’s something that you aren’t really prepared for. They don’t teach you that at the academy for heavy metal training.

Dead Rhetoric: Do you have any ‘bucket list’ goals that you have yet to accomplish with Cradle of Filth?

Filth: Oh yes. I’d like another luxury yacht! [laughs] New Zealand, for some reason we play Australia but we have never been to New Zealand. Turkey is another thing because we’ve pretty much played everywhere in the world but never Turkey. The last time we tried to play Turkey, it was the riots. The government banned large gatherings of people, and I suppose 30,000 metalheads would be considered a large gathering of people so that was cancelled, which is a shame. It was us, Slayer, Stratovarius, and a couple other bands. It was a small bill but big event. That was our 4th or 5th attempt to get to Turkey – it just seems to never happen.

If the opportunity arose, and I know how difficult it would be, I’d like to do another movie. It was a lot of fun, but it was a lot of hard work. People worked and deferred payments, and it was something that really wouldn’t happen again. I owe a lot to the people that worked on it. It’s not something you can really run alongside, being prolifically on tour and writing albums. It does take a lot of your time – much like an album does. I think we’ve done most of our bucket list and there are things we’d like to do again – but that doesn’t really count does it?

Dead Rhetoric: In a recent interview you had mentioned how downloading was taking its toll on the music industry. What does it take to be a successful musician at this point – or is that term itself becoming an oxymoron?

Filth: I think people that were big anywhere before the ‘90s are pretty much okay. They’ve made their money, I guess. With each decade, the money has been taken out of music a bit more, if you know what I mean. The ‘80s were big and successful, but not as much so as the ‘70s were. I really noticed it about 2006-2007, when people were saying that downloading wasn’t going to affect anybody and it’s like tape-trading used to be. But it’s not, because it’s so immediate. Even tape-trading was a bit magical, because it would take ages to make a compilation or write things out. Now things are so sudden. If they don’t like an album immediately, they won’t sit there and listen to it. When you were young, you went out and bought a mysterious album because of the spiky bits on the logo and someone had a Sepultura t-shirt on. If it was crap, you’d still listen to it again and again until you said, “yes, this is crap” or “actually I quite like this” and it was because you paid for it. Now when you get it for free you just move onto the next thing.

It’s not just that. I think government could put some legislation in to protect music a bit more. I went to the cinema earlier today and I noted the warning about someone copywriting the movies and if you are caught filming it you got an indeterminable fine and up to 10 years in prison. If it was an album, you get a slap on the wrist. And you probably wouldn’t even get that. It’s just legistation and protocol covers the movie industry more because there is more money in it and more money spent per movie.

The fact of it is as well, you can laugh about it, but in 2006 when the opportunity presented the record companies to do something about it and they missed it. It’s now filtered down all the way to the grass roots. It’s gone through magazines, radio stations, promoters and gigs, and it’s destroying bands. I know bands, and I won’t give names, but people who were fans of these bands would be so surprised if they knew that they had to take second jobs. Doing these bands for 15-20 years, they never really had anything proper – like a career, because they have always been writing albums. So now they have to take shitty jobs and their albums are delayed because they are working half their life. Their albums come out every 4 years instead of 2, and if they come out every 2 they are substandard because they don’t have time to work on it. It affects us all, and it needs to change a bit. Otherwise it will be the death of music, and you can probably kiss goodbye any new bands making it. I think that’s why they said that there will never been another Metallica again, because the opportunity will never arise for a band to be put on that platform.

Dead Rhetoric: Finally, what’s happening for the rest of the year for Cradle of Filth? Any tour plans?

Filth: It’s just getting busier and busier. We were in the studio for 4 months and thown back into the rush of humanity. We have a bunch of summer festivals as well, and Devilment has a few local shows. Cradle of Filth has some European tours in October. We haven’t gotten confirmation, but hopefully South America happens in December. The US tour – I can’t give dates because it’s the routing is being sorted. We’ve been offered a large number of support acts that have to be sorted, but I think it will start in January and will go for 6-7 weeks. We are also talking about Australia and Japan and even some summer festivals for next year already booked in.

We still have some tracks left over, because we didn’t want to spread ourselves too thinly in the studio. And the special edition has two extra tracks, which are any less in production or songwriting values but some tracks had to be in the special edition. But we had three tracks that we had to jettison, which will hopefully see the light of day in an EP, because we were hoping to do some covers as well. If the longevity of the album is good and the tours are going well, they’ll want something else and that would be a good move for ourselves I think.