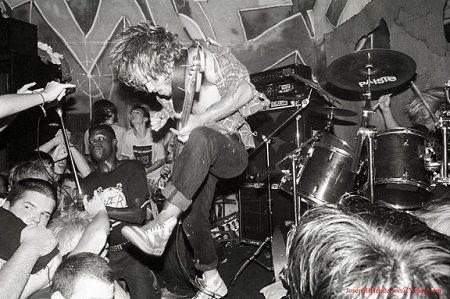 Blistering.com: The COC that did Animosity and Technocracy in your punk days in the mid-80’s, how do you think that version of the band would react to what’s going on in the political landscape of today?

Dean: The main difference is back then, you’re 19 years-old, so you know everything [laughs]. Yeah, that makes me qualified to weigh in. It was a different era, I think that during the 60’s there was a certain increase of political awareness and was motivated by young people being subjected to the draft and being prescripted to go off to this war in a far away land that was Vietnam. There was definitely a lot of activism that brought out a lot of the concepts in which society was based on. It was a really heated time. Then in the 70’s, it evolved into the hedonistic, easy-going approach, then people woke up one day and Reagan was president, so it was pretty reactionary.

What’s funny is that compared to the politicians of today on the right, he’s not even that right-wing. That’s scary. Anyway, there was a sudden rude-awakening, so that generation, we participated in this social thing that was a secondary ripple of the 60’s activism. It wasn’t as strong or informed or strongly motivated since we weren’t facing a life-or-death situation that would make us examine our principles. It was a minor league version of that time. I think Reagan was good for the arts. He fought to de-fund them, but he inspired so much socially-based music like punk rock.

Blistering.com: Do you still have a finger of the political pulse these days?

Dean: Everyone thinks they do, but these days, there’s so little real journalism that people tune into whatever media outlet supports their pre-determined worldview. It’s really a sad spectacle. I’m not a big fan of the major parties and I don’t have much hope for 3rd party people. I sometimes wish Barack Obama was everything the right wing accused him of. A guy like Ron Paul says some good things on the Libertarian front in terms of personal liberty that I really can get along with, but I feel like there needs to be a strong enough government to take on corporate interest that seek to rule for greed, which is what’s happening. He’s a little weak on that. You get the sense that the people who support him like him because he believes in State’s rights and of course, that’s code for “the government shouldn’t interfere if you want to discriminate against a weaker race.”

He’s interesting, but I do like his non-intervention of foreign policy and stands on personal liberty, but I think the choices like the market and free-market require strenuous regulation and oversight and I don’t think he’s the guy to do it. I’m kind of a political hybrid. Anyone who sits in the government can be good, but the only component that’s missing is human wisdom and compassion, and that’s what blows it. That’s the curse of politics…people aren’t perfect. We’re fucked [laughs].

Blistering.com: Let’s switch gears and go back to around the time you put out Wiseblood in 1996 and did the Metallica tour and were basically, firing on all cylinders. Do you think you missed the boat in terms of having a real commercial breakthrough?

Dean: Hard to say. If perhaps, but with different styles that we did, different creative decisions, we might be a step ahead or behind. I don’t know…I think that particular label, Sony, was really…their expectations in what type of sales Corrosion of Conformity weren’t what we would achieve. There were very quarterly earnings-driven and if not’s Celine Dion or whatever…

Dean: Right. It was an interesting ride, that’s for sure.

Blistering.com: What do you remember most about that point in time?

Dean: I think we were smart to take the opportunity to go and record in really awesome studios. We always go to record in historic places like Criteria in Miami where Derek and the Dominos and some of the Aretha Franklin albums were done. We did Electric Lady and had both of our Columbia albums mixed there. The whole thing was a little weird. The day that I found out we were signed to Columbia and Relativity dissolved into Sony, that was the day they found Kurt Cobain dead [April 5, 1994].

Dean: Yeah, it was weird. A very weird situation [laughs].

Blistering.com: A lot of people forget you weren’t involved with the Blind[1991] album, and that’s when Pepper joined the band. Any regrets not being on that album?

Dean: No, I have no regrets. I would have been proud had I taken part in it. I was living in Philadelphia at the time; I was a hell of a bike messenger, living a squat [laughs]. I heard that record and was really impressed. I wasn’t impressed with what they were doing up until that point, and that was my introduction to [longtime COC producer] Jon Custer. Going all the way back, the influences you hear on Blind, those are the influences we were becoming focused on as we did Animosity and Technocracy, driving around in the van on tour, listening to Deep Purple and Thin Lizzy. They just got to the point where the vocalist [Karl Agell] was right for it, and they developed their musical chops, and they had Custer to really help them hone in on it. That was an impressive thing to do. Already with the hardcore bands around the time I quit COC, there was a focus on being progressive, while looking back with heavy rock. I think that’s a completion of that journey.

Blistering.com: The big question hanging over COC is if you’ll ever do anything with Pepper again. I know he’s tied up with Down, but have you had discussions about it?

Dean: There’s no firm plans, but there is a firm desire to make it happen. We had a really good time doing In the Arms of God and I’m really proud of that album. The only thing missing was Reed. I thought Stanton Moore did a great job. If you’re not going to have your original drummer, then it’s novel to get someone who’s flamboyant to do their take on it. I thought that was a good move. I came away from that thinking that if we had this level of creativity and also had Mullin…that would be a bonus. But yeah, I hope we don’t just get that lineup together for shows or Deliverance nostalgia shows, but get it together with the idea of putting out a record. There’s some controversy to doing the three-piece. People are like, “Oh my God, no Pepper!” People haven’t even heard it and complain. I’m like, “Complain on, you’ll see!” There’s a good story behind this version, and there would be a good story behind doing the four-piece again.