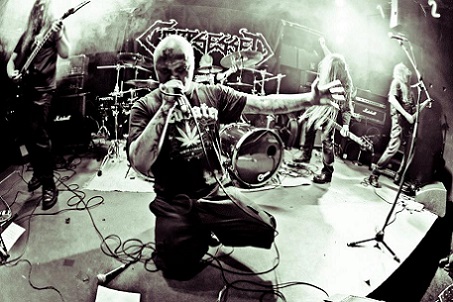 Of the new “old school” bands, one name that is standing at the forefront of quality is that of Finland’s Corpsessed.  Their debut album, Abysmal Thresholds, captures a landscape of primitive death metal with plenty of dirty atmosphere.  Their ability to speed things up and bring things down to a crawl memorably is reason enough to get behind the growing hype surrounding the band. When given the opportunity to interview Corpsessed, we were able to discuss the finer points of writing for an EP versus a full album, the band’s in-house method to recording, as well as their thoughts on the Finnish scene.

Dead Rhetoric: How would you best describe the sound of Corpsessed to the uninitiated?

Corpsessed: Corpsessed plays dark and crushing death metal with putrescent hues of the old Finnish bands of the early 90s. Music where the faster parts are accompanied with doomy passages, low and heavy guitars, deep growled vocals and screams, and rotting atmospheres of horror and desolation. It’s a combination of death and doom, relying more on creating a morbid ambience and riffs than on technicality.

Dead Rhetoric: Previous to Abysmal Thresholds, you recorded two EPs. Is there any difference in the approach to recording a short EP versus a full-length album?

Corpsessed: We did a lot of pre-work for the album, meaning we demo’ed almost all of the songs and created click tracks with demo guitars to which the drums were recorded to. The drums were also recorded in a more professional manner than before and we got quite a pleasing natural sound to them (thanks to L.Laaksonen for the help)! The guitar, bass, synth/effects and vocals were recorded with similar methods to the two previous EPs but I guess we took much more time and effort with them this time. Summa summarum – this album was way more planned and carefully written as a whole than any of our previous releases.

Dead Rhetoric: Corpsessed garnered a bit of a following with your two EPs. Where there any expectations you felt you needed to match with your debut album?

Corpsessed: Only the expectations we had for ourselves. This is our debut album so we wanted it to be special and important to us, and paid close attention to the songwriting and the details in the songs. Debut albums are usually the ones that define the band and are what they are mostly remembered for, so this meant we absolutely wanted to go all-in with this album. This is why it took a lot of time write and release it – we needed to be ready for it.

Dead Rhetoric: Abysmal Thresholds was recorded completely in-house. What are the benefits of maintaining control over having someone come in from the outside to aid in the recording?

Corpsessed: Looser time constraints for one, allowing for a more laidback recording pace when our schedules saw fit. You’re able to give more time to smaller details and to work on your sound. This is good if you know what you are doing – but can turn into a total disaster if not.

Dead Rhetoric: Would you consider a similar in-house process for the next album or are you interested to see what others could do with your sound?

Corpsessed: Maybe, or at least partly. We’re not against studios and of course would be willing to work with others, especially if we are on the same lines when it comes to interests and music. And if we’d know they could bring something specific to the table. Who knows… nothing is set in stone. We’ve recorded all our previous EPs and now the full-length in-house and with our own equipment (sans the drum recordings on the full-length). I know our methods of recording are rather unorthodox and far from hi-fi!

Maybe the next album we might record completely in some studio – just to lessen our own workload when it comes to the engineering, mixing and everything what the process of recording an album involves. The work we did for this full length was huge and at times not easy at all. Still, recording everything ourselves has worked so far for us and has always been the easiest choice.

Dead Rhetoric: The artwork is of Abysmal Thresholds is particularly striking. Was there any story behind it or any deeper meaning to the album?

Corpsessed: The artwork is the vision of the artist Danille Gauvin based on the themes of the lyrics to our songs on the album. When she started drafting the cover artwork we gave her a small synopsis of the lyrics to each song to get some ideas what the album was about. Abysmal Thresholds is not really a theme album of any sorts, which made it actually quite difficult to find a suitable name for it. There is no underlying narrative that would run through all of the songs – other than the general theme of crossing different thresholds; be it a metaphysical one of transcension, a cosmic threshold of Lovecraftian horror, Death seen as a threshold or the line after which all hope is lost.

Everyone is free to draw their own interpretation of the artwork. The themes we find in it are the demoniacal subjugation of the Sovereign who sits upon the conquered throne of Death and receives the trepanation, imposed on the desolate backdrop of barren lands where all humanity seems to have ceased.  Danille also designed the Corpsessed emblem of Apotheosis upon our specific request and directions to accompany the artwork of the album.

Dead Rhetoric: It’s clear listening to Corpsessed that you are influenced by the classic death metal movement but have kept yourselves from being yet another retro-death metal clone. How do you draw the line between acknowledging your influences and the ‘close-to-plagiarism’ feeling that many bands struggle with?

Corpsessed: We don’t… we just write what comes naturally and speaks to us. Sure, the influences are quite obviously there but we don’t write stuff with the intention of ‘hey let’s make it sound like some certain band’. Revere the old, but be ambitious of your own work as well.

Dead Rhetoric: The atmosphere in the tracks is decidedly evil and oppressing. With the variety of bands out there today, does death metal need to sound “evil” in order to be death metal?

Corpsessed: I won’t preach or set rules for anyone about what things should be or should not. Do what thou wilt. However I know how I want my own music to sound like – which is dark, evil and dirty. That’s what appeals to me in death metal personally.

Dead Rhetoric: Being from Finland, why do you suppose it is such a hotbed for heavy metal?

Corpsessed: We don’t know. We get asked about this a lot, and frankly the question has become rather annoying. There are no definite answers; perhaps it just derives from the Finnish mentality, which can be at times very melancholic, primitive and eccentric. Other than that, your guess is as good as mine.

Dead Rhetoric: Any bands in the Finnish scene right now that you are particularly enjoying?

Corpsessed: Quite a few. Actually, if you want a good overlook on the current active Finnish death metal scene – check the upcoming 2CD compilation Metal on Metal IV – The Last Crusade on Metal Warning records, which we were a part of. Besides Corpsessed, it includes such bands as Vorum, Lie in Ruins, Maveth, Krypts, Solothus, Swallowed and loads more.

Dead Rhetoric: What are your plans now that the album is completed and will be released soon?

Corpsessed: No specific plans at the moment. We will most likely play some live shows in Finland and test how the new material works live. Then start slowly composing new stuff when there is inspiration for it. Other than that, we leave everything open and see what happens once the album is out. We’d love to play some European gigs at some point.  Let’s see what happens… the future is always unknown and obscure. 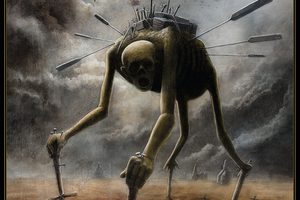