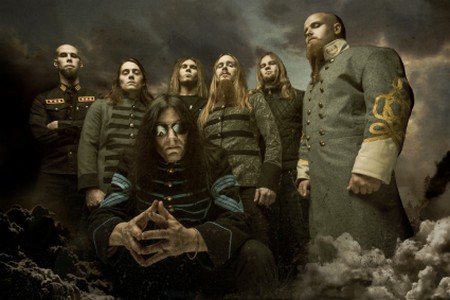 Dead Rhetoric: The lyrical themes continue to parallel the band name regarding war/military battles – how much research do you put in regarding the topics at hand, and do you feel like you are now Civil War experts as a result?

Johansson: Absolutely not, I am no expert on the Civil War whatsoever. We think that it’s cooler to write about historical things than to write about a Saturday night out on the town drinking a beer. Of course we research – we don’t want to give out the wrong information. Of course there are probably many history nerds who are ready to say something is wrong. We are not historians, this is just our version of this. We write stories, for example “The Mad Piper” is about Bill Millin, the guy that played the bagpipe in the invasion of Normandy, of course it’s a tribute to a heroic figure so of course we have to be pretty much correct. We do the best we can to not fail when it comes to facts.

Dead Rhetoric: I would imagine Civil War is not a full-time, money making endeavor at this point in time – are you okay with that at this point in your career, and as a result does the band pick their spots when it comes to touring opportunities/ festival appearances?

Johansson: As I said, the Sabaton guys are pretty much burned out of the business. As the time goes on they are starting to come back, they really want to play more shows. I think Astral Doors, we have had our shots, touring with Blind Guardian and stuff like that, but I think that perhaps we have our fans in Civil War. They are passionate, but there may not be so many at this point. For Civil War it’s a building project, I am getting older so I would like to see how long this band can take me.

Johansson: My favorite gig with Civil War was absolutely the Sweden Rock Festival. We played for 15,000 perhaps, it was great. We also played Graspop and I loved that. Civil War is a fantastic live band actually, we look good on stage and it is fun for me. I think I show more of my vocal range and capacity in Civil War. If we would play 150 gigs a year, we could be huge, but we don’t want to play 150 gigs per year. We are a strong force live- especially the drummer Daniel Mullback, he’s an animal behind the drums. He must have been the biggest loss for Sabaton.

There are so many shows. When I was a teenager I saw all the concerts in Stockholm. Black Sabbath with Ian Gillan, Iron Maiden I saw four times. Dio of course… I watched all the classic concerts. I don’t listen to much new music or see many concerts these days, I’ve got my hands so much into my own music. I met Dio at Wacken when Astral Doors played there, he was very friendly. I took a picture with Dio and my son standing together. When we played last summer at Graspop in Belgium, a guy came up while I was sitting there eating breakfast, and he asked if I was Patrick. It was the guitarist from Metal Church, Kurdt Vanderhoof and he really loved my singing. That was a big thing for me, because I really loved Metal Church when I was a teenager. I never get star struck because everyone is just a person.

Dead Rhetoric: Where do you see the state of traditional/power metal in 2015? Are there any changes or improvements you would like to see?

Johansson: Well, I think I don’t know how big it is in the States, in Europe it’s pretty big. Look at Sabaton, they have really especially in Sweden brought attention to the power metal genre again. It’s a good thing, we have our die-hards fans. Most of the concerts I have played have been in Germany, so power metal in Germany is as strong as ever. Another tough country is England- I really would like to play more there, I’ve only played there 2-3 times. It’s a tougher market. We would love to tour the United States with Civil War – we had our chances with Astral Doors but we managed to mess things up.

Dead Rhetoric: You did get the chance to play in the USA at ProgPower with Wuthering Heights, how was that experience for you?

Johansson: That was a great memory. I mean, ProgPower USA is like an institution in hard rock and heavy metal. I would like to come back there sometime.

Dead Rhetoric: Is it important in your eyes to get along with your bandmates on a personal basis outside of your music/work endeavors?

Johansson: Yes it sure is, absolutely. Especially in Civil War because as you’ve said we are building this up. We talk to each other every day, that’s why it didn’t work out with Pizza for example. We are like a family.

Dead Rhetoric: What’s the story behind drummer Daniel Mullback and his record 2496 snare-strokes in one minute? That is insanely fast compared to a lot of extreme metal drummers and their blasting abilities…

Johansson: Yeah… I don’t know the story behind it. He won the Swedish championship because of this. I know he has practiced a lot since he was a kid on the snare. He is extremely fast.

Dead Rhetoric: Do you have to spend a lot of time warming up your voice in studio or live situations?

Johansson: Actually until a couple of years ago I never did anything, I just went up on stage and sang. Now that I’m a bit older I have to sing up, so I have to start an hour before the concert so that my voice is warmed up and ready. Otherwise it would take a couple of songs before I can deliver. I sing a lot of scales, drink a lot of water with honey, I never drink alcohol before a gig. Those are some of my secrets.

Dead Rhetoric: I remember from a previous interview we did you are a fan of ice hockey – have you been watching the NHL playoffs much and do you have any predictions for who may be hoisting the Stanley Cup in the end?

Johansson: Oh… this year I haven’t been following it so closely. I have a full job following my home team in Sweden, Leksands IF. But I think perhaps the New York Rangers can win this year, they were close last year, so maybe it’s their turn. Some superstars come to the World Championships in ice hockey, if they aren’t in the playoffs. This year it’s in the Czech Republic, so that should be very fun.

Dead Rhetoric: How do you envision the next 12 months playing out for Civil War as far as promotional opportunities and live appearances? Would you like to get back to North America even if it’s on a limited touring basis?

Johansson: It’s any band’s dream to make it in the USA. If you can make it there, you can make it anywhere! (laughs). We will have a pretty hectic schedule in the autumn and during the summer for the festivals. We will play live a lot this year, and hopefully we can start writing…I have already started writing for the next album. It’s always something all the time. Hopefully we can do a second video for the album…we would like to do one for “Tears from the North”, that is like the Viking ballad. We would like to stand on a Viking ship and shoot it. “Bay of Pigs”, we did that video in Gothenburg with a Spanish film crew. We were in a hangar and it was filmed in below freezing weather, so it was cold as hell. We filmed for 10 hours, so it was lots of fun but we look pretty angry and aggressive at least.