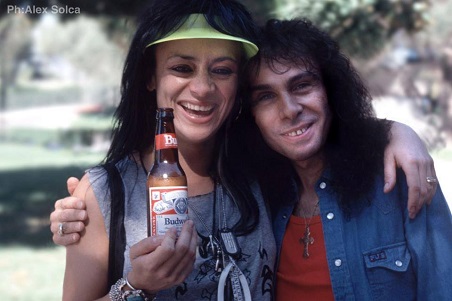 Dead Rhetoric: How do you feel being one of the trailblazers for females in heavy metal- does it surprise you the influence you’ve made on the genre?

Leone: Veronica [Freeman, Benedictum] is a new great friend of mine. It’s amazing to me. I don’t feel like a trailblazer. I used to be in Heart cover bands, Pat Benatar cover bands, and then I moved to California and met Rude Girl – and I got turned on to Ronnie James Dio and it was over. Back then there was no internet. When Doro was there, Ann Boleyn, Debbie Gunn, Dawn Crosby from Détente, we only knew about each other if we ran into them at the clubs. If that is true at all, that’s amazing. I know Betsy [Bitch] was out there, but she sang in more of a clean style. If I influenced anyone, right on! I don’t think about that- it’s not like I sold a million records, but I am humbled. Women can do it, and back then we were told that women couldn’t do it.

I used to like be involved with the road crews when we would travel around. I would always carry in Chastain’s guitars when we would go in for sound checks. People just thought I was a roadie, and the guys would get up there and be all cool, thinking I was this chick roadie. I found real pleasure in going up there and saying “Hey- this is my band and this is my sound check.” If you want to sing dirty, man, just keep practicing.

Dead Rhetoric: Where do you see the state of metal in 2013? We seem to be in a state of flux as social media and the fast pace of technology flood consumers with so many choices to spend their time and money upon, which can be a good and bad thing depending on your outlook…

Leone: And you know what I’ve noticed? I’m noticing that on all the Liquid Metal bands on satellite…Mastodon comes to mind – they are really heavy. Then there are other bands who are going to the electronic thing. In This Moment comes to mind, it sounds like disco and those crazy machines, and other acts have this Hendrix-y solo, getting kind of cool with these hippie pieces in there which was before my time. People are so extreme, where else can they go. I think it is exciting to see where things can go- where does Slipknot go next? Or Cannibal Corpse? It seems like things are either extremely melodic in the power metal genre or it’s this extreme style.

Dead Rhetoric: How was it to play the Keep It True Festival in Germany with Sledge Leather?

Leone: I don’t usually get nervous. The kids were incredible; we were getting followed around wherever we went. Just before we went on, I was backstage saying to myself, “What am I doing?” Looking out seeing thousands of people, I could feel myself going white. We opened with “Ruler of the Wasteland” and they were so welcoming to me. We did a lot of new material that they didn’t know, but the Chastain stuff was insane. I closed with “Voice of the Cult,” and they had to pull me off that stage, I couldn’t thank them enough. The Europeans are like that, when they love you, they love you for a hundred years. It is just a different crowd. I remember seeing an interview with Ronnie within the past ten years, they asked him why he was playing in Europe more than in America, and he said that America has become the land of American Idol. They change every day, but I really hope to go back over to Europe and play, I am working on it.

Dead Rhetoric: You’ve expressed great love and admiration for the late Ronnie James Dio, and had the chance to meet him in your career. Tell us about your time with him and what special memories you have through the years?

Leone: Yes. I think I first met him in 1982. All of the time I was around I could go see him. What a nice man. It was in 1982, I was in Rude Girl, and back in the day we carried around cassettes. I think it was in Mountain View, California – Sandy Sledge was incredible. Anywhere you go, she could get us back stage, we were there. She disappeared and I was totally engrossed in this Ronnie James Dio experience. All of a sudden I hear this whistle and he was stage left, he brings me back and we go on his bus.

Him and Jimmy Bain, Wendy- well, Sandy brings out the demo and he played it, he wasn’t paying much attention, but he liked what he heard. He loved music, he loved my voice, and I didn’t want to leave him, I just wanted him to adopt me [laughs]. I was blessed to meet him many times. I was enamored by his music – I got to do a couple of photo sessions with him. So I guess when we lost him I was sitting around going, “Really?” There is talent and love and I wasn’t doing anything. So Ronnie, yes he was a really great guy. He believes his voice came from his training on the French horn. You talk about inspiring people; you have a lot of thrash bands that have re-done “Holy Diver,” it’s just amazing. There’s a new track on the Chastain album called “Bleed for Me” which is anybody who knows me can read into the lyrics, it’s about him.

Dead Rhetoric: How much does it take for you to warm up your voice before studio and live work?

Leone: Yes, I do this funny thing with warm ups. I’ve always been told that I’m like a race horse, I can sing for a couple of hours but I don’t really kick into gear until hour three. But I do warm up, the vowels for 15 to 20 minutes. Please do not put me in the studio in the morning, though. That’s about it.

Dead Rhetoric: What do the future plans look like for Chastain or any other endeavors in the coming year or two?

Leone: I don’t really have anything definitely. I don’t know if I’m going to get another record out of Chastain or not. We have the material, but I’m not quite sure where that’s going to go. Talking about Veronica, she is putting out a solo record that is going to come out in the summer of 2014 which I am on, I did a song with her. We are in talks to possibly do some shows together, I don’t know. I am wide open, I am a road dog, I have to get out. If Sabbath wants to call me if Ozzy can’t sing anymore [laughs]. Back in the day with Pearlman, he was a Sabbath guy, and Michelle Anthony was Black Sabbath’s lawyer. When they would play in the area, when Ozzy would pull one of his things where he threatened to not show, they would tell her about this girl. I remember Iommi saying, “That was very nice…” We are blessed that you can always record on your own with home studios. So I will record again, somehow, someway.