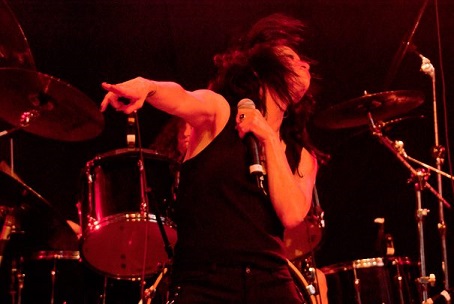 Dead Rhetoric: In 1985 the debut Chastain album Mystery of Illusion hit the scene. How do you feel about the debut album after all these years- are you pleased with the songwriting, your performances, and what were some of the special moments about the recording sessions that you treasure today?

Leone: I love it. I wish we could remix that thing. “Black Knight,” “Mystery of Illusion,” “Endlessly,” I would love to record those now. I couldn’t sing back then, I was so green and I really like that record. The production is the 80’s nightmare, but it brings back memories of when I met Fred Coury and we were recording in a studio in Northern California and Cliff Burton was up there at the time in a band called Trauma. It was an early time for all of us, this new heavy metal thing and I was on top of the world, just flying around.

Dead Rhetoric: Fred Coury would move on to Cinderella and you would pick up drummer Ken Mary for the second Chastain album Ruler of the Wasteland, one of my personal favorites. You’ve mentioned in interviews about the definite 80’s production values on the record- how do you feel the songwriting stands up? Obviously it’s made an impression because in later years other bands would cover songs off this like Hammerfall with “Angel of Mercy” on their Crimson Thunder album and Powergod covering the title track as well…

Leone: Yeah, Chastain turned me on to the Powergod cover, I really like that as well. Looking back I think that was the best record we did. I didn’t write the stuff but I did perform it, and I thought what a compliment. That record did really, really well for us. I run into some kids now that think Hammerfall did “Angel of Mercy,” so I had to introduce them to Chastain doing the original. I consider everything such a blessing, Matt- that I got to go into recording studios, and tour and play coliseums, who can ever really complain about anything? Ruler of the Wasteland – when I went to Germany and performed with Sledge Leather, people go crazy over that song and record.

Dead Rhetoric: The third album The 7th Of Never would be my first Chastain album purchase back in my high school years- and I remember my friends gaping with their mouths open when I told them this was a female singer belting out songs like “We Must Carry On,” “Paradise,” and the title track. Were these great times for the band, because I remember more tour dates taking place in support of this record, a club tour that took the band across the East Coast and Mid-West?

Leone: Yeah, yeah! David reminds me of all this, you have to remember it was only ten years ago! [laughs]. He said that radio station KNAC down in Los Angeles really picked up on Ruler of the Wasteland, but that Leather didn’t want to tour in support of it and that I wanted to stay at home. So when The 7th of Never started taking off I knew we had to get out there. Things started happening with the press, more interviews, more shows, things started getting bigger and I thought we were ready to break big time.

“The 7th of Never” was a great song, “We Must Carry On,” whenever I did that song with Sledge Leather people would go crazy. That was Chastain really displaying the big, heavy, hooky/ catchy choruses that he could write yet still contain them within a metal song. That is not one of my favorite records as far as vocals- I started to sing a little cleaner on that record, which I listen to now and don’t appreciate as much. It was really funny when I was in Europe seeing 25 year old people wearing 7th of Never shirts, I would think “Where did they get that from, your grandfather?” [laughs]

Dead Rhetoric: Towards the end of the Chastain run, you had The Voice of the Cult and For Those Who Dare, the latter elevating the band to a deal with Roadrunner Records. What caused the beginning of the end for the band- was it changing musical styles, record label struggles, or just personal/ creative differences?

Leone: It was none of those –  I can’t give you any great story. For Those Who Dare, I was disappointed with it just because we did the whole MTV run but the shows were getting smaller because the economy was in a bit of a downturn. People were going to spend $20 to see Metallica, not Chastain. It didn’t evolve; I had done a couple of coliseum shows with Kiss and Alice Cooper, it was in support of either The Voice of the Cult or For Those Who Dare, and the shows were starting to get smaller. We were getting really tired, I was starting to get frustrated. I just went home from wherever we were and I was just going to take six months off and get into other stuff. I think we knew mentally it was time to stop. Chastain has never been huge, he doesn’t want to play out in Europe, he isn’t a road dog like me and I think he was really tired of it. He lost a lot of money, it was time to go home after being out on the road for six-seven years.

Dead Rhetoric: In 1989 your solo album Shock Waves hit the streets featuring more of your songwriting than ever. Did David encourage this record to get more of your work out there and how did you feel about these songs and performances?

Leone: Yes, he is from the south so he often calls me “Miss Leather” and he tells me that I don’t remember how upset I was that we weren’t selling a lot of records and it was his idea. I don’t consider myself a solo artist but I started getting these pieces of music, and we would put advertisements in music magazines looking for artists that wanted to submit some music. I really started to get into this, but I don’t think it’s that much different from a regular Chastain record, maybe more of a power vocal. They didn’t really push that record. Monte Conner who was at Roadrunner at the time and I love, I still keep in contact with him. I think they just took the Shock Waves record from me as kind of a package deal with Chastain. I still really love that record.

Dead Rhetoric: Taking a couple of decades off before reappearing on the scene with the Sledge Leather album and a Keep It True festival appearance in Germany 2011m your love for metal never wavered. People often wondered if you dropped off the face of the earth- did you enjoy the back to normal life outside of metal in those years?

Leone: Thanks Matt! [laughs]. Did I enjoy it? I have the kind of personality that when I do something and then when I’m done, I close the door and stop it. I was so frustrated for so long because the Chastain thing ceased, I came back to California and a lot of people would see me, I met with a lot of record labels, I actually did demos for Vixen, but I was trying to get into a heavier band and I didn’t have a lot of success. [Future Chastain vocalist] Kate French asked me, “Well where did you go, what did you do?” I just didn’t have any big offers and I did not want to start from the bottom again. In my mind I should have been able to go to a band at the Chastain level, and I was just laughed at. People wanted me to go softer, go more melodic, go mainstream, and I was not interested in that.

I was kind of a bitch and a baby and I decided I am just not doing that. I have always had a problem with the record labels with the sex thing. I don’t know why someone can’t be looked at for their vocals- I love the chick from Otep for instance. Why can’t you just wear jeans and blow vocals? I stopped listening to music in the mid 90’s, I really enjoyed my life out here. I started working with animals, it took seven or eight years to settle into things.