Charred Walls of the Damned – Atop the Crystal Mountain 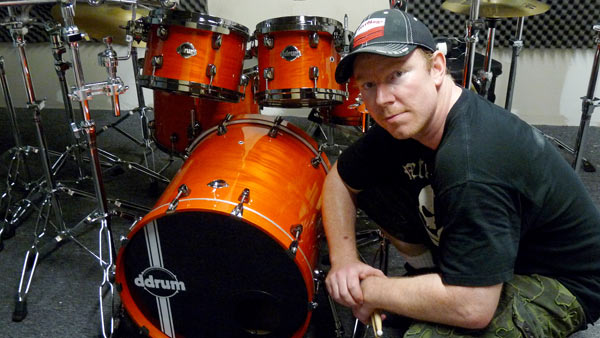 It all started with the “fill.” You know it – the opening drum bombast to Death’s “Scavenger of Human Sorrow.” Its entire 10-seconds of explosive life quickly jumpstarted a career for a then-unknown drummer from Missouri, all the while setting the stage for one of the 90’s preeminent metal albums, The Sound of Perseverance. It’s the most identifiable drum opening since Judas Priest’s “Painkiller” and while Blistering understands the audacity of such a statement, trying to pinpoint a fill of equal significance came up short. The man behind it? Richard Christy. (Ed note: If you don’t have The Sound of Perseverance, please get it now, ok?)

By now we know of Christy’s day job on the Howard Stern Show and his comedic flair. The man is funny, definitely, but let us not overlook his track record as one of metal’s most dependable drummers. From his too-short stint with Death, to his also too-short time in Control Denied (R.I.P., Chuck), Christy was able to parlay that work into stints with Iced Earth and Incantation. Talk about variety.

The new year sees Christy unveil his long-awaited project, Charred Walls of the Damned. Paired with super-singer Tim “Ripper” Owens (Judas Priest, Yngwie Malmsteen, Iced Earth), guitarist/producer Jason Suceof (Trivium, All That Remains) and bass legend Steve DiGiorgio (Death, Testament, Sadus), Charred’s self-titled debut is the logical extension of Christy’s time with Death and Control Denied. Brimming with tasty drum licks and Owens’ now veteran lungs, this is every bit the melodic, technical foray that we’d expect from someone to come from the School of Schuldiner.

The totally affable Christy phoned Blistering to talk about Charred, but being that we are of the inquiring nature, we wanted to pick his brain on his early days with Death (and priceless first encounter with Schuldiner), the status of Control Denied’s long-awaited second album, and how he manages his day job with everything else…

Blistering.com: The album just had its North American release date, so how does it feel to finally have this thing out?

Richard Christy: Awesome. I’ve been listening to the album since August and I couldn’t wait for people to hear it. I know these things take a while and like I said – I’ve listened to it at least a thousand times leading up to this. It feels great, very exciting…gratifying even. Some of these songs have been in the works for years, some less than a year, but I’m very excited for it to be out and for everyone to finally hear it.

Blistering.com: To what you just said, are some of these songs/riffs stuff you’ve been accumulating over the years or are they fresh ideas?

Christy: I’ve been playing guitar for a long time – since ’92, but more since I’ve moved to New York City. I’ve just been accumulating riffs, putting songs together. I love creating; the art of songwriting. The bulk of the album was written from December of 2008 to April of 2009 and I once I knew they were they needed to be, we went into the studio.

Blistering.com: Jason Suceof was manning both the producer’s chair and playing guitar. He’s known for being a “character,” so to speak. Any good stories you’d like to share?

Christy: [laughs] He’s definitely a character. There’s one story where Jason stretched his testicles all the way to his belly. We were going to put it on the [bonus] DVD, but he didn’t want it on there. I don’t blame him [laughs]. There was a lot of goofy stuff going on. He put in a tiki bar outside and next to it is this pond that had a duck come and visit us every day. We named him “Craig” and I fed him…he’s just the cutest thing in the world. He became our mascot after a while.

Blistering.com: Any bouts of nostalgia being back at Jason’s studio?

Christy: Oh yeah. I helped build the parquet floor there and before Chuck passed away, it’s where Control Denied wrote, rehearsed and recorded in 2000. Lots of great memories with that one. I actually lived with Jason for a little bit since a fire destroyed the storage space I was living in and another memory I have is when Chuck came over and rescued this dog on the side of the street that had rope tied around its mouth. Jason ended up keeping it and named it “Cane,” and it turned out to be the coolest dog ever. Unfortunately, he passed away in September, but he was such a great Rottweiler.

Blistering.com: Switching gears, with your drumming being as technical and elaborate as it is, there is still an onus on actual songs.

Christy: I think the most important thing in metal is the guitar riffs. My process was as simple as sitting down and coming up with them and I wanted it to be melodic and heavy at the same time. I wanted something where the vocals could just flow over the music and really, the main goal was to have music that stuck in people’s heads.

Blistering.com: I can understand that; the chorus from “Voices From Within the Walls” has been in my head for the past few days.

Christy: That’s awesome – I love hearing that. We’re thinking about what song to do as a single the other day and “Voices…” is definitely one we’re considering. “Blood on Wood” is another choice as well. I think it goes back to something like Meatloaf’s Bat Out of Hell, which I was listening to the other day. I haven’t heard that album in years, but every song was so catchy that you found yourself singing all of the songs.

Blistering.com: Was Ripper Owens your only choice for the vocal spot?

Christy: Yeah, he was my first choice. He was really into it and he’s such a cool guy. We got to know each other really well when we were playing together in Iced Earth. He has a busy schedule, but we were able to find five days to his vocals. Jason was worried that five days wouldn’t be enough, but Tim’s such a singing machine that it came out perfect. It’s especially great for me since Tim, Steve and Jason were all my first choice for the project.