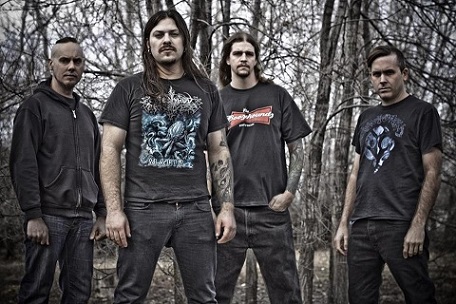 Everyone takes something different away from death metal. Whether it’s in b-horror movie concepts, blinding technicality, or romper-room chunky riff action, death metal offers a wide array of choices to suit just about anyone. These days, there’s less of an onus on shocking people with grossed-out lyrical concepts and more importance placed on having something to say, which is something San Diego’s Cattle Decapitation have made a career out of since their mid-90’s inception.

Notable not only because of their rather twisted name and once-prominent vegetarian angle, Cattle Decap have the musical wares to back everything up. 2009’s excellent The Harvest Floor was the band’s critical breakthrough, lauded for its engaging songwriting and Travis Ryan’s bezerk vocal barks, thus setting up this year’s even better Monolith of Inhumanity. With a bottomless pit of serpentine riffs from guitarist Josh Elmore (see: “Dead Set On Suicide” and “Kingdom of Tyrants”) and Ryan’s multi-faceted vocal approach (including what he calls “pterodactyl vocals”), Monolith is perhaps the band’s most satisfying effort to date.

We caught up with Ryan while the band was on the road with Origin, Decrepit Birth, Aborted, and Battlecross to talk about the new album, but before we got down to business, an audibly-tired Ryan engaged Blistering in a discussion about the surplus of package tours hitting the States this year. Once the singer got past some light-hearted groveling, we dove into a conversation about the scene and its tour combinations…

Blistering.com: What is there? Four or five package this in North America this summer, right?

Travis Ryan: Yeah, and we’re on one of them! [with Fear Factory and Voivod – ed.] It should be cool…that’s a good one we’re on. We’ve done Summer Slaughter in the past and that was cool.

Blistering.com: And it’s an interesting bill. Voivod isn’t a huge draw in the States, so I’m curious to see how it goes.

Ryan: Yeah, but, you’re not taking into the account with the whole thrash revival thing that bands from that era are turning people onto the older stuff. Young kids love that kind of metal now, with their fucking patches and shit like that. It’s kind of cool. I remember back in the day that I’d tell you white Reeboks are cheesy then and they’re still cheesy now [laughs].

Blistering.com: The whole thrash revival was pretty big a few years ago, now it’s dying down.

Ryan: A band we’re on tour with has a little bit of thrashiness in them, Battlecross. They’re actually pretty good. Great kids. They don’t play “space metal” or “djent” [laughs].

Blistering.com: I feel sorry for Meshuggah – a lot of bands are stealing their ideas directly.

Ryan: Yeah, it’s pretty stupid. They all sound the same, but whatever. I have to question the validity of stuff like that. Just like with the thrash revival, it’s like, “Really? Come on!”

Blistering.com: Anyway, The Harvest Floor did well really for you a few years ago, so was there any onus on taking that record to the next level with Monolith of Inhumanity?

Ryan: The thing was, right off the bat it was one of our most critically-acclaimed records. We knew we had to…one-up if we can or do something equally as powerful. I think we did that, especially because of all the reviews and stuff are really, really good.

Blistering.com: Josh’s guitar playing is top-notch too. He has such an unconventional approach to his riffs. Does he surprise you with the type of riffs he comes up with?

Ryan: Honestly, I just wait for them to give me songs [laughs]. I think he’s constantly coming up with shit and stockpiling it away. We were probably more prepared with writing this one than any of our previous releases because we’ve had a long time, although we were touring. There were times where we weren’t doing much, but he was constantly coming up with riffs and ideas. It’s weird…it’s a combination between him, Derek [Engermann, bass], and Dave [McGraw, drums]. He comes up with a laundry list of riffs, brings it to them, they go over it…it’s pretty cool.

Blistering.com: This is your first album with Derek on bass, so was there any type of adjusting you had to do?

Ryan: He had a hand in some of the structure of some of the songs. That was one of the things he kept saying: “I’m really good at structuring songs.” He helped out a lot. I think he’s added something new – Troy, our old bass player had a lot to do with the songwriting on our last few records. It was weird – we didn’t know what to expect. We could have hired him and he could have sucked and been a great person and great on the road. But he also could have totally been a great bass player and sucked as a person [laughs]. Obviously, that wasn’t the case. I don’t know if it was just the timing, he seemed to bring more of a metal edge, especially to our live performance [laughs]. None of us have hair and he does.

Blistering.com: Hey, it’s good to have hair in death metal. I don’t have any hair, so I don’t know if I could fit.

Ryan: [laughs] I know! He’s really into the buzz-saw riffs…the really epic-sounding kind of shit too.

Blistering.com: Lyrically, there’s always been this big to-do over your vegetarianism, but it looks like you’ve taken a different angle this time out. What was it?

Ryan: The approach is the same everytime. I’ll have a theme, there will be a few songs peppered throughout the record, and the cover will deal with that theme. The rest of the songs are their own little things like, “Your Disposal,” “Harvest Stampede,” “King of Tyrants,” those deal with what’s going on with the cover. But, “Projectile Ovulation,” “Forced Gender Reassignment” and “A Living, Breathing Piece of Defecating Meat” obviously don’t have anything to do with any kind of message [laughs].

Overall, they all tend to be very misanthropic and that’s sort of been I would think, are steeped in those themes than in vegetarianism, which has been the case for a long, long time. The media likes to grab onto certain things and run with them. I think that angle with our band is shiny; flashy…people are going to grab onto it and run with it. A lot of that started with the fact we have an intense name and play intense music, so people think we’re super-leftist, vegan warriors. To be honest, Derek and Dave eat what they want. Me and Josh are the only vegetarians [laughs]. The last five records have dealt with other themes than animal rights or anything like that.

Blistering.com: Based on that, how much of the news do you follow?

Ryan: I’m not politically-motivated whatsoever. If you look at the lyrics, they really only offer problems, they don’t offer solutions. They’re calling out people…it’s something that’s a part of the dark side that death metal has always dealt with. That’s just my take on it. It’s my way of creating death metal lyrics, but I don’t like calling it death metal [laughs]. But, you know what I’m getting at.

Blistering.com: I do. What’s the scoop on the video for “Kingdom of Tyrants?” It’s something different from the norm, for most death metal bands like to shoot in some abandoned warehouse, but this is more like a mini-movie.

Ryan: The director [Mitch Massie] was insane, I had nothing to do with it [laughs]. The only thing I did was hire him after seeing his stuff, and I knew that’s what I wanted to be done. He’s done a couple of videos that had nothing to do with our style of music and that’s one of the things…I wanted to use a guy that doesn’t deal with death metal. I saw a few directors’ ideas and there was some stuff I wanted to hit upon. But I wanted it to be unorthodox, I wanted something nobody had seen before or would expect. I wanted utter, “What the fuck?” I wanted people to say, “I don’t know what I just saw, but it was awesome.” You don’t have to go back and re-watch and re-watch, but I wanted that, “Oh Christ, what the fuck just happened?”

Blistering.com: It also helps that “Kingdom of Tyrants” is one of the better songs on the album.

Ryan: The funny thing about that one is that it’s one Derek and I wrote. We showed everyone and we were like, “This is going to be an epic song. Let’s make the last song on the album.” I had this riff I had been humming in my head for the last three years, had the chorus riff, and I was playing it in the room, and Derek said it would go great with one of his riffs, and it came together. That was fun. I’m really stoked on that song and the video is out of control.

Blistering.com: Vocally, you have a new bag of tricks. You have your traditional growls and grunts, but there are some new tones thrown in there. How did they come about?

Ryan: Yeah, but that’s been a later development. On the last record, I was screwing around with it a little bit, but then I noticed kids were like, “Do more of that!” A lot of people. The band liked that stuff and were totally into it and I like it too.

Blistering.com: Does it put any additional strain on your voice?

Ryan: It’s one or the other. I can’t do both, and I’m way more trained on the death metal kind of vocals. Live, it’s where I have to compensate. It’s not as sing-y or as clean, and that was because I knew going into it, I was going to record those parts first. The death metal-type vocals were only going to create that portion of the voice, and that’s the only way to do it. On this one, I made sure there were parts…and they did too.

Blistering.com: You need to give that style a name!

Ryan: Someone called it “death singing” the other day.

Blistering.com: But then you think of good cop versus bad cop vocals.

Ryan: No, no, no, you’re right. There is “The Pterodactyl,” which was coined by some fan. There’s this one kid in Sweden that posted a video on Youtube explaining how to do it. He’s talking about me and it’s my trademark kind of thing, and he totally nails it. And I was like, “Wow, fuck, you totally explained it better than I could!”