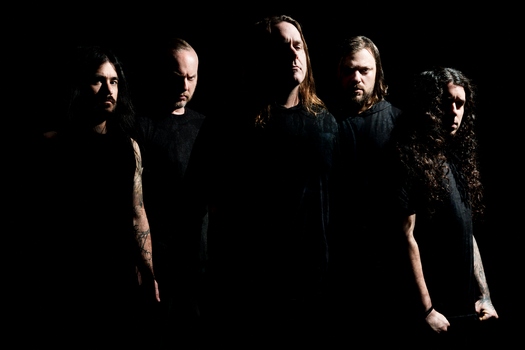 Over the course of this decade, few have managed to impress within the death metal scene more than Cattle Decapitation. As they moved further from straight grind and upped the ‘death’ quotient, more heads started turning their way, and 2012’s Monolith of Inhumanity marked a turning point. The Anthropocene Extinction further upped the ante with their injection of multiple extreme music sources and unique approaches to melody (both instrumentally and vocally). Four years later, we are at the doorsteps of their eighth album in Death Atlas, and album that continues the trend of the band widening the margins of what they do within the genre to provide another breathtaking piece of extreme music. So naturally, we grabbed frontman Travis Ryan to give us some further insight into the new album and beyond.

Dead Rhetoric: How do you feel that Death Atlas progresses the sound that you have been advancing with the last few albums?

Travis Ryan: It’s much more cinematic and evocative. There’s a whole lot of anger and sadness being the dominating emotive. To be frank, that’s my favorite kind of stuff. Dark, brooding, epic and intense. This album has all of that. We did ok with the last couple albums but this is the one that I feel will really resonate with fans. I can’t see someone liking Monolith of Inhumanity over this record. It’s just too huge and commanding of one’s senses.

Dead Rhetoric: There’s quite a bit of sorrow to contrast with the aggressiveness of the material. What do you feel the dynamics add to the album?

Ryan: It’s the valley amongst the peaks. All of our albums are intense and have that edge to them but it wouldn’t be Cattle Decapitation without that. I’m just so thrilled that we’re able to mix these elements that are near and dear to my soul and chemical make-up and have it connect with people. I see people in the crowd crying sometimes and seeing that was a huge inspiration to us. That is real, true emotion. You can’t fake that. Unless you’re crazy.

Dead Rhetoric: What can you speak to about some of the lyrical concepts for Death Atlas?

Ryan: I often wonder if maybe I’m just possessed. My friends and I used to fuck around with Ouiji boards as kids and one day we believe we met a spirit who called himself “Gabriel”. My friend wanted to stop immediately and I wanted to keep going. I often wonder if that’s who I’m possessed by. I’ve never told anyone this. That name also pertains to one of the 7 angels in the book of Revelations. I was warped by Catholocism at an early age… maybe that’s what it is.

Anyways, this album’s lyrics are much more poetic and feels to me like it came from this dark place in my soul that seems to have traveled with me all these years. Maybe that’s where my contempt for people comes. Although I believe I’m just wired differently, perhaps a couple loose wires in there that is causing these rather fucked up lyrics and viewpoint. I really don’t know. But as long as I’m talking about humanity and its destructive nature, the lyrics kinda write themselves. Long story short, the lyrics take place post-anthropocene and leave much to the imagination in terms of just how things transpire. We obviously don’t know what’s going to eventually do us in and I don’t want to put a full on narrative on that. So the lyrics leave openings for interpretations. It’s my most metaphorical work and it’s my most poetic work so far.

Dead Rhetoric: Was it surprising to see that someone had lifted your cover for Death Atlas and was trying to use it for themselves when the album wasn’t even out yet?

Ryan: Not much surprises me in terms of younger generations and what they deem acceptable anymore. So instead of getting mad about it, we had fun with it. It ended up being more like how a cat does with a lizard or a mouse it just maimed – playing with it before you eat it alive. But really, what we did was enter a symbiotic relationship with a stranger who simply didn’t give a fuck (as indicative by how he rolled out his mixtape all blatantly with our cover which belongs to Metal Blade Records, arguably the largest metal label on the planet) and we both had some fun with it. We made a little money and he got a few more followers. I do not suggest people steal ours or other’s art, but how you deal with the situation can change everything.

What I’m more in shock about is I’ve seen a couple people say I was cruel and unusual in the method in which we dealt with it. OK so out of the hundreds of positive comments and people laughing and that we made smile that day, two losers had to suck the fun out of it and focus instead on the meme we basically created instead of the fact our intellectual property was completely molested by a stranger in a completely different demographic thinking it’s all good. Nah. Fuck that.

Dead Rhetoric: How important do you feel that Dave Otero has been to the overall process, having recorded numerous albums for Cattle Decapitation at this point?

Ryan: Well, he’s my favorite to track with for sure. Tracking with him is awesome, we get in each other’s heads and there’s nothing like it. With each album, he has developed new skill sets and that means each album will be better than the last. He’s got a great ear and he even helps fix parts we weren’t sure about when writing the album and so on. We simply stumbled upon a great producer and have developed quite a personal and working relationship with him and so if it’s not broke, don’t go trying to fix it. That’s why we return to Flatline.

Dead Rhetoric: Do you feel that the band’s lyrics about the environment and the world around us make them more affecting than extreme metal acts that focus more on fantasy/fiction?

Ryan: I would think so. While poetic and fantastical, the lyrics are still steeped in a very REAL and important subject matter. Everyone is dealing with environmental issues from locally (ie: the drinking water in Flint, MI) to globally (ie: climate change, marine plastics, global warming, etc) whether they know it or not. I grew up listening to Megadeth, Nuclear Assault, Coroner and all those bands dealt with current events at the time. I think it’s just always been part of metal whether people like it or not. I don’t know that extreme music is the best vehicle for such a thing but it works for us.

Dead Rhetoric: What is it that you think we need to do as a species to turn things around from the direction that we have continued to move in? Or is there a way back at all now?

Ryan: Listen to the fucking scientists for starters. Stop thinking just about ourselves and this moment. If you’re having children you should definitely worry for their futures. I do believe there are multiple ways to turn back the clock but if the politicians who care more about their wallets than anything are the ones enacting the policies which are ignoring scientific research and data, well then there possibly goes your kids’ futures. And their childrens’ futures and on and on.

Dead Rhetoric: Given that the band has evolved a bit over the years, do you feel that Cattle Decapitation has any distinct characteristics that have persisted from the beginning to now?

Ryan: There’s an intensity in the music, a “wall of sound” quality, that has never left and will always be there or else it simply isn’t Cattle Decapitation. I think the vocals and guitars play a big role in that. And then the drums help send us into a whirlwind and that is the part I love about this band. It’s intense. I’m an intense person and while I’m only the lyric writer, the music is still very much a part of who and what I am.

Dead Rhetoric: Cattle Decapitation wasn’t an overnight success within the metal community – do you feel that you are more appreciative of the increase in your fanbase gaining it later, than if you had simply ‘exploded onto the scene’ in your 20s?

Ryan: We are but since we’ve been a band for so many years, we also feel we’re overdue. At the same time, we stepped up musically which made the fans step up and thus the label took notice and stepped up big time. That’s one of my favorite things that’s happened is a much better feeling with the label now that we’re performing better for em. Honestly, we’re just glad that people took notice cuz we easily could have fucked ourselves by adding more melodic elements into something that’s rather extreme. But if we didn’t do that, I’m telling you now… I would have been bored silly. I’m having much more fun in the band now than ever because musically it’s so much more interesting to me.

Dead Rhetoric: What would you like to see out of the extreme metal scene as we move towards the future?

Ryan: I wanna see incestuous [material] squashed. Quit ripping others off. I wanna see shit get weird. Do YOUR thing and make it yours.

Dead Rhetoric: What plans does Cattle Decapitation have for the rest of the year and beyond?

Ryan: We’re doing an EU tour starting the end of this week which is a kick-off to a world tour that’s gonna last the next year solid and beyond! See you soon!