Catching Up With Omnium Gatherum 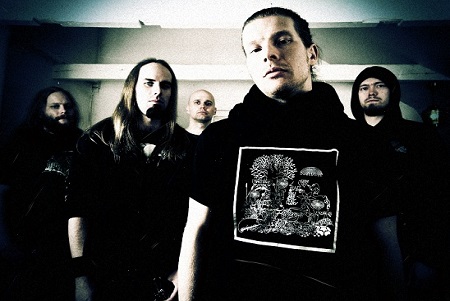 Stating the obvious, we heaped quite a bit of praise last year on Omnium Gatherum and their New World Shadows album. World-beating efforts like NWS don’t happen very often, even if the band’s track record leading up to that point was near-flawless. It was (and still is) the culmination of years and years of work refining, honing, and ultimately perfecting their melodic death metal craft. The gradual uptick from their 2003 debut Spirits and August Light through ’07’s Stuck Here On Snake’s Way to New World Shadows is certainly an impressive one, and outside of Kalmah, is unrivaled in Finnish melodic DM annals. Methinks it’s highly unlikely the band has peaked either…

Originally interviewed as part of our Best-of 2011 festivities (where upon this editor was certain OG was to take the top spot until Anthrax joined in on the fun), lead guitarist/founding member Markus Vanhala started off by expressing his happiness with how the year turned out: “We were really, really satisfied for the album that we did it really the way we wanted it, as that’s a piece of really honest music. I’m so happy that the media and fans really took the album for their own and praised it widely. Of course for me, making music isn’t about getting good reviews and good sales, but when you’re honestly happy with your release, then all is a good bonus on top…which is good reward for the work you’ve done in this case!”

Opinions of one’s work tends to change over time, with some artists going to minimize the importance/value of their recent outing. On the flipside, there’s a preponderance of those who pay the company line by uttering how their newest release is the best thing since sliced bread. Now that roughly a year has passed since New World Shadows hit stores, Vanhala’s enthusiasm was hard to mask. “It’s been already a year since the album was mixed and finished and I’m still in love with it, so this is something new and we’re on the right track I think! The first album is of course, magical because it’s the first, but this one is what OG is all about. And we’ll be continuing on this path surely with the next release. In a way, we of course took another step again with this album, but the almighty ‘big world-wide breakthrough’ is still waiting.’”

After the early 2011 addition of guitarist Joonas “Jope” Koto, the band’s touring schedule dwarfed, resulting in a spate of live activity that toppled that of previous years. “During last little bit over six months we’ve already done two European tours with Rotting Christ and another with Dark Tranquillity/Eluveitie,” said Vanhala. “Then a big amount of summer festivals and two Finnish headlining tours, so at least we’ve been playing more live shows than been on the rehearsal room. This whole year list for this is two days at the rehearsal room and something like 100 live shows. But nothing much more has changed in the band [we’re] going the same way.”

A potential touring quandary does exist now that Vanhala has joined Insomnium, an act who is just a small step above OG on the melodic death metal ladder. Having been a longtime friend of the Insomnium guys, in addition to filling in on select live dates, the decision to join his fellow countrymen was an easy one. And with any luck, the schedules will be managed accordingly. “Of course it’s going to be some schedule hassle with two active bands, but everything will be settled and OG will keep going strong! Already the first tours collided lately, as Insomnium European tours first week were happening the same time than OG’s Neckbreaker’s Ball European tour, so Insomnium had a substitute player on their first week of tour and then I continued straightly from OG tour to I-tour. I’m only doing my own personal hell busy with the two band marriage.” [laughs]

As for what’s on deck for 2012, Vanhala seems to have a few ideas up his sleeve, including the possibility of the follow-up to New World Shadows.

“There’s have been plans now to do the next OG album on 2012 as there’s already a big pile of material done for that,” he concludes. “Maybe there’ll be some digital single or EP and new video before the actual album release, maybe even in late spring or something. Better start working on this ASAP!”