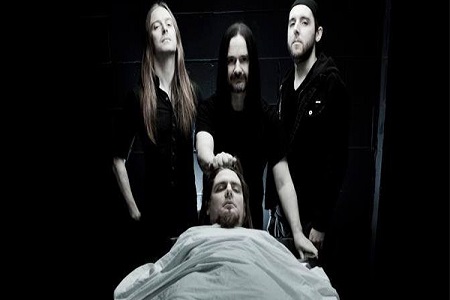 The first portion of our interview with Carcass singer/bassist Jeff Walker delved largely into the band’s reformation and process of getting the band up to speed. For the second part, addressed was Walker’s vocals, and perhaps the only bit of controversy surrounding the album – the fact that early-90’s era guitarist Michael Amott (also of Arch Enemy) opted to not take part in the creation of Surgical Steel. Thankfully, we didn’t piss Walker off too much with questions of that variety…

Dead Rhetoric: Vocally, it’s like you never took any time off. The rasp is still there, but in terms of recording Surgical Steel, did you need any time to get back up to speed?

Walker: When we had our first rehearsal with Mike and Dan and I did some vocals, Mike was like, “Wow, you can still do it.” Well of course I fucking can [laughs]. I would say my vocal performance is the best one I’ve ever done because I had the time and luxury to have a real go at it. In the old days with Heartwork, I drew the shortest straw. I only had a few days, but with this album, I had as much time as I wanted. I think I had maybe 13 days to do all 15 tracks, but it’s grueling if you doing 3-4 hours a day doing death metal vocals. And it’s dangerous if you’re pushing yourself hard all day – you could fuck your voice up. At the end of the day, I don’t have any talent, but I can do Jeff Walker vocals and that’s about it [laughs].

Dead Rhetoric: You’re using a lot of numbers if your lyrics. Is that a common thread among the lyrics?

Walker: It’s completely accidental, but you are the first person to pick up on it. It is something I consider myself, like this is our numerical album. It’s not deliberate, but there are a lot of numbers cropping up. Maybe we’ll teach people math or something.

Dead Rhetoric: The albatross over the album is Mike not being involved. Had he been involved, do you think the album would be even more melodic than what it already is?

Walker: It’s very hypothetical, isn’t it? What do people think this melody is? Are they referring to the dual guitars on “Granulating Dark Satanic Mills? That’s not melody in itself – if you go back even to Reek, there’s melody. There’s not twin-guitar harmonies, but it’s there. Do I think there would have been any more melody? I don’t know, but the reality is, Mike is not on the album. I think, credit where credit is due, Mike definitely brought something to Necroticism and Heartwork, but with all due respect, he’s got a lot of mileage and credit if we were to analyze the situation, some of it would be quite unfair to Bill. Things are credited that are actually Bill’s at the end of the day.

Dead Rhetoric: Just reference some songs on Swansong, like “Child’s Play.” That’s melodic, and all Bill.

Walker: You can’t take away from what Mike contributed on the leads – it’s fantastic, and a breath of fresh air when juxtaposed to Bill’s playing. But there are a lot of leads that are on Heartwork that people assume are Mike, but it’s Bill. There’s one moment on the new album on “Granulating Dark Satanic Mills” and Bill plays this lick and we’re like “Hmmmmm…” Even Bill was like, “Uh, okay.” Even after, when having a drink, he goes “Hang on, that’s like my lead from ‘Heartwork.’” I think a lot of people are downloading music and not reading the credits. Like I said – I didn’t want to take anything away from Mike Amott and his contributions to Carcass, but I do think people have ran with it.

Dead Rhetoric: I think they’re up to eight or nine.

Walker: Some people ask if I’m missing Mike’s riff or leads, my response is “There’s eight fucking albums to go off of.” [laughs]

Dead Rhetoric: Are you slowly working through the process with people in terms of what the reasons for him not being involved are? I think it’s clear now.

Walker: Not really. For example, we did some gigs in South America, [and] his name wasn’t mentioned once. These interviews, it depends on the people asking the questions know anything about the band, or they’re just Mike Amott fanboys. What’s annoying slightly, it’s hard to choose your words carefully, because no matter what you say, when it’s in black or white and in print, it can look nasty. There’s no real…problem either way. I’m happy with the album and I don’t think it’s missing Mike. I don’t think it would have benefited with him playing on it, and I don’t mean it bitterly.

We did talk about getting another guitarist involved, but Bill never really showed any interest. Bill wanted to do this to prove he’s kind of the daddy when it comes to Carcass. If we were very cynical, it would have been great to have Mike involved, never mind the fact the man sales-wise, has a large fanbase. The guy is practically a rock star in Japan, and that’s not an exaggeration. He’s a Marty Friedman character there, but it’s also important for us to set the history straight, you know?

Dead Rhetoric: Speaking of the lineup, you and Bill are the same age, but Dan and Ben are a bit younger. What’s the dynamic like?

Dead Rhetoric: The fact you didn’t get any big names suggests you’re thinking long-term with this. Is that fair to say?

Walker: Wilding has been in some successful acts. He was playing in Heaven Shall Burn when we approached him, as a live session player and they were playing massive shows in Germany. With the guitarist situation, there was one point where we were talking to Jesper [Stromblad] from In Flames, but that fell through. He agreed to do one gig with us, but bottled out, so that was for the best. I talked to Gary Holt and he was saying he’d do it, but then he got the Slayer gig. Again, that worked out the best. It’s nice on paper, but I think we have the best situation with Ben. He’s a fantastic player, he’s English, and there’s no bullshit. There’s no one in the band with any real egos, with the exception of me…and Bill. The nice thing is that we’re all on the same level and we’re a team. It’s about loyalty. You can never underestimate loyalty.