Carcass – Quite Fit For Human Consumption Part I 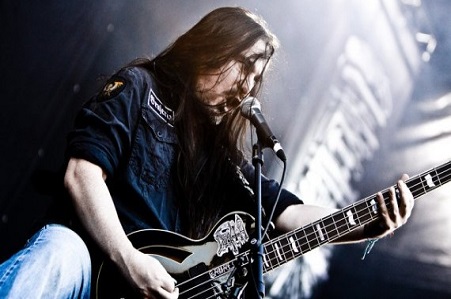 Dead Rhetoric: With the new album, what was your “Hey, this is going to work!” moment?

Walker: In the rehearsal room, it’s that simple. Bill actually was like, “Okay, let’s try this out and if it works, great, if not, we haven’t lost anything.” My attitude was that it will work, like, “Don’t worry Bill.” I have enough confidence in myself and him as a guitar player, and Daniel is a fantastic drummer and I was never under any illusion that we couldn’t pull something great off. I mean, we’re hungry and we have something to prove after 17 years and we don’t want to disappoint people. We don’t want to be one of these bands who come back after a long period of time with an album that people are like, “That album sucks!” We already made that album – it’s called Swansong. It’s important we don’t shit on our legacy.

This is almost like making our first album. We’ve done this off our own volition, with our own time, and our own money. No one was dangling a carrot in front of us. We could have easily found a record deal, then made this album. But, I think it was out of pride – especially from my side that it was more important we put our money where our mouth is. We kept it secret, and we didn’t want to be accused of doing it for the money.

Walker: I disagree [laughs]. Joking aside, it’s easy to deal with those kind of snipes, but I don’t want to give people ammunition.

Dead Rhetoric: Is there any sort of pride in knowing how many bands have ripped off Heartwork and Symphonies of Sickness, and you guys can come back and do it better than before?

Walker: I honestly don’t know because it’s not the result of any pressure from me and Bill. All I can say – and it wasn’t any real arm-twisting. In his previous bands, he was playing all the blast-beats on two kick-drums, which is kind of atypically modern. We call it the “Euro blast,” the “cheap beat,” which we trace back to Shane Embury from when he was in Unseen Terror. With Carcass and the bands we’ve been involved with – Napalm Death, The Electro-Hippies, my old band – all the blast-beats on the kick drum are post-punk rock. It comes from bands like Siege, DRI, etc. I might have commented about that, but to be honest, Bill was very laissez faire.

It was important, but I never made a big deal about it. I didn’t put any pressure on Dan, but on his own volition, he started to play in this style and I asked why he was doing this, and he’s like, “Well, this is what suits Carcass.” So maybe he has done his homework, but it’s not like Bill and I have kept on his back. If anything with Ken, Bill was always standing over his drum kit. With this, I said to Bill, “You don’t seem to be spending much time directing Dan.” If anything, I was that guy [laughs]. I don’t necessarily feel bad, but Dan’s his own man. He’s done his homework and I want to read interviews where people are asking him what he’s done. The reality is in the studio, he could have easily overplayed because he’s an accomplished drummer, but he knows where he fits in the music. The next album we’ll let him overplay [laughs].

Dead Rhetoric: Was Ken around at all during the record of the album?

Walker: Only on the day he came down and did his parts. He came down and spent the whole day. They checked it out and Ken gave Dan the thumbs-up and the seal of approval. It’s weird with Ken. It’s tough on me and Bill because when we started to do this, we had to let Ken know, so Bill went to see him in person and said, “Look Ken, we’re writing a new album.” And all Ken could say way, “What took you so long?” We feel this kind of guilt in a way, but Ken was blasé about it.

After the whole reunion thing, any emotional bullshit – which wasn’t bullshit – or anxiety was cleared away after the first gig. I hope Ken doesn’t mind me saying this, but the first gig in Sweden, there was tears in his eyes because it dawned on him that we were playing the first gig with Mike [Amott] and Daniel [Erlandsson] and I think he was slightly upset because we were playing the first gig. It must be very frustrating to him, but he dealt with it like a trooper. I know bands where one musician owns or claims the name – maybe 10 or 20%, and they spend all of their lives getting the other bastards to pay him money, putting restrictions on what they can play, and stopping them from being a band. Obviously, there’s no question Ken would never do that, but it’s his band as well. He’s never put any obstacles in our way because it affects him emotionally; he’s very “go with it.” We do our best to still make him feel valid.

Part II of our interview with Walker will post tomorrow, September 2.