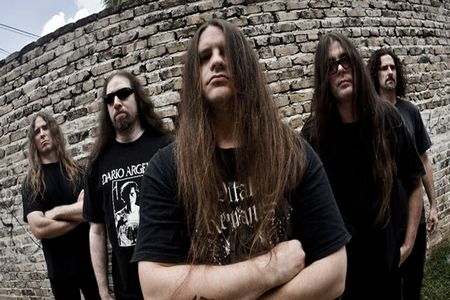 It’s tough to write an introduction to a band as well-known as Cannibal Corpse. Who in the death metal world doesn’t know Cannibal Corpse? Thirteen albums in, the band is still going strong. One might argue that they are going stronger than ever. They’ve set the bar for death metal, and have always led by example. And compared to a number of bands that have been held in high regard for a long period, they tend to avoid the drama that tends to combat many a band as they grow older.

The band’s last album, A Skeletal Domain, saw some impressive success for the band. It’s clear that many still wait with anticipation for each of Cannibal Corpse’s releases. In fact, they were presented with a plaque by Metal Blade to commemorate 2 million overall units sold earlier this year. A staggering accomplishment for a band that has held true to its own death metal sources for over 25 years without compromise. The band will be heading out on tour beginning in October with Cattle Decapitation and Soreption – offering a full evening of high quality death metal. With all this in mind, DR was able to chat with drummer/founding member Paul Mazurkiewicz to discuss about all this and more.

Dead Rhetoric: A belated congrats on hitting 2 million albums overall – are you ever stunned by some of the numbers, coming from a band like yourselves?

Paul Mazurkiewicz: Yeah, it’s definitely crazy to think of our whole career in general I guess. I think we are all perhaps stunned by what we have accomplished all around in every aspect. But for us to sell over 2 million units worldwide since the beginning of the band is a pretty remarkable feat. It is something to look at and go, “wow that is crazy – we are a death metal band.” We’ve sold a lot of records over our career. It is pretty cool, but you always take a step back and it’s pretty remarkable and pretty unbelievable at times. But we are happy, that’s for sure!

Dead Rhetoric: Likewise, A Skeletal Domain hit #32 on the Billboard Charts; recently we’ve gotten big numbers from Iron Maiden and Slayer as well. Do you think that overall, metal fans have been a bit more loyal despite the changing music industry?

Mazurkiewicz: I would think so. I think it’s always been the case. It just seems like metal fans are different music fans. In this whole day and age of CD sales dwindling, you have metal that is just thriving – I believe, more so than ever. In our case, we pushed close to 10,000 units – that’s crazy for us. It’s a huge jump for us from the ‘90s and the early 2000’s. It doesn’t make sense, but I do believe that metal fans are different. They want the product. They want to own the cd and everything. They want to look at the cover, read the liner notes, and have the lyrics. All that kind of stuff. I think they are just a little bit more loyal than most fan bases of music.

Dead Rhetoric: You’ll be heading out on your second big North American headliner tour for 2015 soon. You’ve got Cattle Decapitation and Soreption this time. Last time it was Behemoth, Aeon, and Tribulation. You seem to get great tour packages – how much say do you have in getting the tour package together?

Mazurkiewicz: We get a lot of say at this point. Everyone is going to come together of course – our bookie, management, and us. Just piecing it all together. We, of course, have a huge say in everything we do. Ideas may be presented to us, and if we think it’s going to work, we are going to go along with those ideas. The Behemoth thing was pretty much put together through our management. They just asked what we thought, and we said, let’s do it. For this tour, it’s more like “we know we are going to be back in the states and headlining our own thing – let’s make it a solid package with bands that we are pumped to have out there. Make it a killer death metal thing.” We have 100% say in who we want to have out there with us. It’s pretty good. We are happy to work that way – we feel that we help out a lot bands and have over the years. That’s just the way we are and how we like to do things. We like to promote the younger bands and the bands that need to be seen. It’s good to have a lot of input on our tours.

Dead Rhetoric: You have 13 albums at this point. How do you pick from the vast amount of material to play live, even for a headline set?

Mazurkiewicz: I know! It’s tough. Obviously we always want to promote the new album a little bit more, so we are always doing a good 3-4 songs on that record. Then you are just going down and trying to represent every album that is possible. It’s getting a little bit tougher these days, with a few of the albums, we say “man, we have to play that song off of that album, and this song off of this album.” Before you know it, you have a couple songs off a couple of albums and that may just thin out some of the other albums. So yeah, it’s tough. As long as we know that we are covering a lot of the early areas, the newer, and the middle – like I said, maybe an album is neglected here and there possibly. It’s not easy these days coming up with a set list.

Dead Rhetoric: Is there any song that you’ve gotten tired of playing over the years? Likewise, are there some that you always want to play live?

Mazurkiewicz: We have fun playing all of them really. There are some where you might go, “wow, we have been playing ‘Hammer Smashed Face’ since we came up with the song and it debuted on our third record.” I’m sure that there has not been a tour where we didn’t play “Hammer Smashed Face” or “Stripped, Raped, and Strangled.” Luckily, both of those songs are fun to play. I never go into playing those songs, going “man, I am so sick of this song.” I never feel that way, and those are the songs we have been playing the longest out of any of them. Luckily that is the case, I speak for myself at least. I’m having fun playing all the songs that we are doing and that’s always good.

Dead Rhetoric: When you are looking at songs for the tour, do you ever like to pull one or two out of obscurity?

Mazurkiewicz: It depends on the tour. It depends on how much time we have to get things together. We’ve done it in the past. A few years ago, we pulled out “Scattered Remains, Splattered Brains” off the first record. That was a song that we had never done with George [Fisher], and maybe not even Rob [Barrett]. That was one that we really pulled out of the archives. Another one in particular was “An Experiment in Homicide” off The Bleeding and that was the same thing. We hadn’t played it since 1994-95. So we do it from time to time, and then there are some that are in rotation for a few tours and we bring them back. For instance, with our upcoming tour – nothing crazy is going to come out of the woodwork that we haven’t done in a while. It was just a timing thing – we will have a good, diverse set. I’m sure the fans will not be disappointed, but they are definitely not going to hear a song that we haven’t played in 20 years or something. But the time will come for that soon enough. I’m sure tours will come up and we will say that it’s time to pull a few out of the hat that we haven’t done in a while or maybe forever. It’s always good to do that.