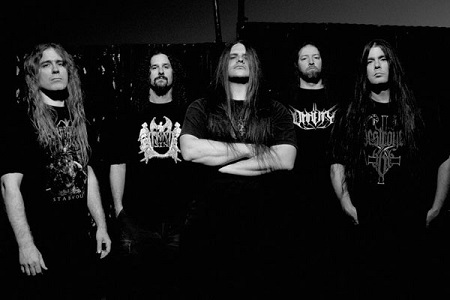 Blistering.com: Since the band is so established and you’ve already proven yourself, is it more tolerable to release an album every three years as opposed to the schedule you maintained in the early days?

Webster: We released Evisceration Plague in early 2009 and immediately began touring, then we continued touring until the end of 2010, with very few breaks. We didn’t write. We usually don’t write when we’re touring, but this time out, we might write a little bit when we’re home and get a little ahead of the game so we don’t have to take three years and just take two. It winds up being two years touring, then we’ll take a half a year or eight months to write, then two months recording, then three or four months for the album to be released. So you can see how that fits into a three-year cycle, but we’re never taking any time off, not anything longer than a month when we get off tour. I think our last tour ended in December in 2010 and we were already practicing and writing new material by January of 2011.

The touring is just so extensive now. For Eaten Back to Life (1990), there was no tour at all, we just did shows around New York, Montreal, and Pittsburgh. We were constantly writing during that time. For Butchered and Birth (1991) there weren’t many tours either, maybe a few months, and we were already working on Tomb of the Mutilated (1992). Everything was at a smaller scale back then, and since the touring has become so extensive, it has created longer gaps between releases.

Blistering.com: This all has to help from a business perspective, where it appears you run a pretty tight ship. Are you the type that doesn’t let anything slip through the cracks?

Webster: For a long time, we were self-managed until 2008. Me and the other guys took care of everything and we had a music lawyer to take care of those details, and the people at Metal Blade were quasi-managing us. We had no manager. We have become fairly adept at certain business things, but when we picked up management, we found we were neglecting certain things out of ignorance, really. It was important for us because this is how we are making our living. The music is most important, but if you’re going to be out there working hard, doing shows, you have to make sure the business side is taking care of.

You have to kept an eye on everything…somebody is making money for it. Most of the fans think all the money goes to us. By the time the money gets to us, a lot of the money has gone to other places, but it’s good to have your management help you get what you deserve, but we have to pay them too [laughs]. Everyone gets paid before the band [laughs]. We keep track of everything that happens from a business point of view, and we make a good, honest living at this point, but I would never recommend anyone getting into music to make money. You get into it because you love it and if you can make money, you do your best to take care of it. You have to love music…we’ve been in it for 20-something years and none of us are even close to being rich. We love what we do, but don’t do it for the love of money, that’s just stupid [laughs].

Blistering.com: I saw a figure about how your album sales have increased, particularly between the last two albums. Most bands are seeing their sales decline, but yours are going up. Do you have any real explanation as to why this has happened for you?

Webster: It’s really hard to say what it could be. I’ve thought about it a little bit – we’re definitely going against the trend in overall CD sales in the U.S. and the world. We’ve been able to increase pretty drastically in the last five or six years, so I’m trying to think what it could be. I think it’s a number of things: We’ve been able to get on some good tours lately. In the summer of 2006 forKill, we toured on Sounds of the Underground, and that was one of the first tours in U.S. since 1996 when we toured with Anthrax and the Misfits where we toured with bands outside of the death and black metal scene. I think it helped get some of the more straight-ahead metal fans in the U.S. and Canada into the band. They started to see us as a band they could get to.

Death metal is metal. We’re definitely a death metal band, and that’s our scene, but the good death metal bands like us, Suffocation, Dying Fetus…we’re capable of standing alongside and playing the same stages as the best metal bands in any genre. I’m not saying we’re better than any of them, but there’s a lot of great death metal bands that are capable of hanging in there with any form of metal. We were able to do the Sounds of the Underground tour, we finally got some videos, so I think those things helped. With Evisceration Plaguewe did the Mayhem fest, and we took on management right before that, and they started pushing us for tours like opening for Children of Bodom, opening for Hatebreed. We love to tour with death metal bands and we’re always going to do that, but I think it’s a good idea for bands of any genre to step outside their genre when it comes to who they tour with to help build their audience. I think that’s directly responsible for the uptick in sales.