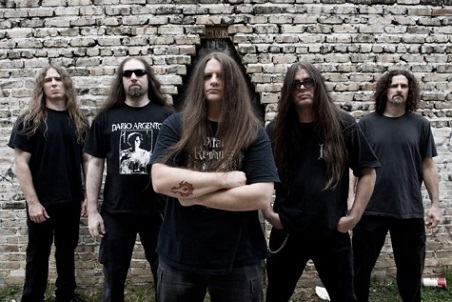 The Floridian death metal scene is littered with big personalities: Chris Barnes, David Vincent, Glenn Benton, and when he was alive, Chuck Schuldiner. The face-to-name recognition of these men helped add to their respective bands’ visibility, but it didn’t help when some rather subpar albums were churned out (i.e. Warpath, Illud Divinum Insanus, and In Torment In Hell). Such a happening usually leads to these men barking out claims of a “return to form” album, perhaps hoping to catch the band they’ve been chasing for decades, Cannibal Corpse. All have tried, but none have succeeded.

There is no big personality in Cannibal Corpse, no laundry list of inflammatory remarks, and there’s not a dud in their catalog. They’re easily the most high-profile North American death metal, but they’re the most consistent and well-run. They’re the definition of professionalism, further relayed by the reports of increased record sales, higher-profile tours, and wide-ranging respect from all ends of the metal globe. Frankly, the band’s success is plain to see, they’ve simply outworked, out-thought, and out-played the competition.

Founding member and bassist Alex Webster has long been at the controls of the CC ship, so when the man phones to wax on the band’s forthcoming show on the 70,000 Tons of Metal cruise and upcoming album Torture (due on March 13 via Metal Blade), it’s best to press record and let the well-spoken bass monger go. So we did, and here’s what the man of a thousand headbangs had to say…

Blistering.com: You’re playing on a cruise ship in a few weeks…have you ever played a gig like this?

Alex Webster: We’ve never played on a cruise ship, but I can’t play we’ve never played on a boat before because there’s a venue in Hungary that’s on a docked ship, so we have played in Budapest a few times on a boat, but it doesn’t go anywhere [laughs]. This will be the first time we’ve done a cruise ship and as far as I know, this will be the first time anyone in the band has been on a cruise. We’ve been on a few going from France to England, from Denmark up to Sweden, things like, but we’ve never been on a proper, luxury liner like this. It should be really fun and to be doing our first cruise with a bunch of our metal brothers, it should be great.

Blistering.com: You’ll be hard-pressed to find a more varied bill too.

Webster: I’m really excited to see Coroner, Rob Royce is a great bass player. Obviously it will be great to see Suffocation and Dark Funeral, they’re both good friends of ours. Overkill is on the bill as well, so that will be awesome. I like all kinds of different metal, so I’m going to do my best to check as many bands out as I can. Other than when we’re playing, I’ll be in the crowd, watching bands. I’m looking forward to it as a fan, not just as a performer.

Blistering.com: From a touring/live show standpoint, what made you decide to do the cruise?

Webster: They reached out to us last year and it didn’t work because we were finishing with our tour cycle at the time. To be honest, we weren’t sure what it was going to be like. Since it was their inaugural year and it wasn’t good for our schedule, we decided to pass, but fortunately they came back to us because apparently, the first year was amazing. Everyone involved had a great time, so yeah, we wanted to give it a try. We’re down here in Florida anyway, so we’ll ride our camper to Ft. Lauderdale to do a show on the 22nd, take another 40 minutes to Miami, get on the boat and head out to the Cayman Islands.

Blistering.com: Obviously, the big thing for 2012 is the new studio album. I read a quote from you saying the quote was more varied, meaning some of the guys chipped in more than usual, so I’m curious to know who makes the final decision as to what songs make the album and what the sequencing is.

Webster: It’s very democratic. For the songwriting, the division was pretty even: I did five songs, Pat [O’Brien, guitars] turned in four, and Rob [Barrett, guitars] did three. I wrote lyrics for my five songs, Paul [Mazurkiewicz, drums] wrote lyrics for Pat’s songs, plus one of Rob’s, and Rob did lyrics for two of his. We wanted to make to make sure that having the different writers…we didn’t want to have five of my songs in a row. We spaced everything out. We tried to mix it up so that you’re getting each of the writer’s style that goes along. And I think me, Rob, and Pat, for each of the songs we did, we tried to make them different than the other one. If you have three different writers in the band, each of the writers is making an effort to make their songs its own character, you’ll end up with a really varied album. Not every song is fast. We have some slow songs, mid-tempo songs, and really fast songs…it will be an up and down thing. It’s all heavy, and all death metal, but there’s a lot of variety.

Blistering.com: You hit upon some really cool songs going the mid-tempo route on Evisceration Plague a few years ago. Is the new album picking up where you left off with the previous one?

Webster: The way I’ve been looking at it, my best description for this album is that it’s somewhere between Kill and Evisceration Plague. It sounds a little more raw and a little more old-school, but still has the precision and groove ofEvisceration Plague, whereas Kill was a rawer and had more old-school aggression. It’s somewhere between those two.

Blistering.com: You’ve been releasing albums for 22 years now, so does worry ever set in about running out of things to say musically and lyrically?

Webster: So far, it hasn’t been a problem. Again, it helps having other guys in the band writing as well. For me, I never worry about running out of ideas with the music. Even though we’re working in the boundaries of pure death metal, there’s still a lot of room to be creative. Where it can be a little tricky is when writing lyrics. Every lyric we do, whether gory or not, we want to have some kind of horror topic. Fortunately, there are a lot of good horror topics where you can have fantasy horror about zombies, or something more real like serial killers, or supernatural or psychological horror. That is a little tricky…when you don’t want to go too far away from what you’ve done, you end up repeating yourself. We’re comfortable with repeating ourselves lyrically as long as the music is fresh, and I feel like we’ve been able to keep the music fresh.

Blistering.com: This is your third album working with Erik Rutan [Hate Eternal]. I would imagine the level of comfort between him and the band is pretty high at this point.

Webster: Erik is a great friend of ours and he’s a great producer. He’s the kind of guy that knows what death metal is supposed to be from his background in Ripping Corpse, Morbid Angel, and Hate Eternal. That is about as solid as a death metal resume as anyone can have, and he definitely recognizes the difference between something that’s brutal and kick-ass, and something that’s cheesy. We do write all the music before we come, but there are some small decisions to be made like adding guitar harmonies, where he’ll say something is corny, or a guitar solo, it’s good to have someone in there who understands our musically completely. And he’s really good at getting guitar and bass sounds…he’s really skillful and a metal expert. It’s a good combination.