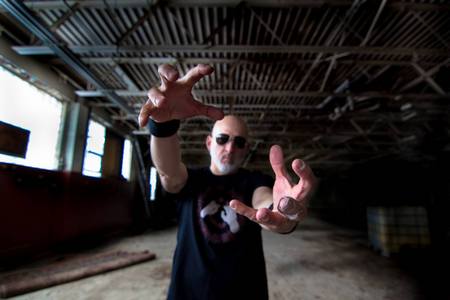 Dead Rhetoric: You alluded to this earlier, but would you like to be able to shed the whole ‘underrated/underappreciated’ tag the band seems perpetually associated with?

Ojeda: I could look at that from both sides. When you are underrated and you are the underdog, people always root for you. They really champion you because they want you to succeed. Then when you get to that top status, you are always looking down the hill wondering who is going to take you out. Maybe it would be better for us to always be the underdog, you know? Then again, at the end of a career, if we have 10 albums and we look back and say, “well, we were always underrated,” that could also mean that you never really succeeded financially. In the end to me, I’m comfortable with the underrated status. I’m comfortable knowing that probably 60% of heavy metal fans around the world have no idea who we are. That’s fine [laughs]. If we stay that way, that would be fine.

Dead Rhetoric: I can understand that reasoning – along the same lines, do you feel that mentality has helped to give you some perspective by avoiding the direct spotlight of some of your peers?

Ojeda: I think it has. It’s given us something to strive for. I turn around and watch bands that get to this huge pinnacle and they destruct on stage, or the music starts sucking…it’s a humbling thing to know that I can work my day job – 40 hours a week as a general contractor and then go to my rehearsals and know that we really have to work for these songs. If we can just get them out there on tour, that we can convert people by the hundreds. Where other bands, they’ve already been seen so much. I like that feeling. Some people would say that is retarded, at 17 years in, you shouldn’t have to play these small clubs and convert people, but I think the tortoise always beats the hare. I’m a pretty patient guy. Let’s just keep going that way.

Dead Rhetoric: That leads right into my next question…how do you keep plugging away over the years and avoid becoming discouraged?

Ojeda: We do get discouraged at times. When we look at our bank account and we barely have enough money to pay the rehearsal fee, or wonder how I will afford a new guitar. But things are starting to line up for us now. I think the thing that helps us is that we try to be really humble and gracious for what we have achieved so far. We could have easily broke up and never got back together. If that would have happened, I wouldn’t be talking to you right now. I have to just wake up every day, and say, “I’ve got interviews lined-up, I’ve got rehearsal later…things are going great.” You just keep your head down and your chin up at the same time. You take it day by day, and things just keep working out for us. Like I said, we are still relatively unknown and it gives us something to strive for every time we go out and play. I’m really grateful for that.

Dead Rhetoric: It’s like you said, you are 17 years in and some people think it’s silly that you are playing these small shows, but from the fan perspective, it’s always nicer to see that band that’s super excited to be there, even if there are 5 people rather than the one that’s like “ugh, there’s only 5,000 people today, this isn’t worth it.”

Ojeda: I think one of the other things that helps me out, is that I’ve got a lot of friends that started around the same time we did, that have had a lot more success than we have had. Like my buddy Chris Adler [Lamb of God]. I can look at him and just be really discouraged about where our band ended up, because they have gold albums and we don’t [laughs]. But what I try to focus on are my other friends, who are more talented than me here in West Virginia and never play out of their double-wide trailer. I have to look at that, and I’ve done pretty well. And if I give up, those friends will kick my ass. They are looking to me to represent them. If I keep looking that way, instead of the guys in front of me already making more money, I’m able to keep my head down and my chin up.

Dead Rhetoric: Could you talk about the “New Ways to Bear Witness” video and having ex-member Matt Wolfe involved?

Ojeda: The song is kind of topical in nature. It’s about the pervasive use of cell phones and cameras and how you really can’t turn anywhere without having a camera pointed at your face. We thought that if we did a video around that, it would be kind of lame. So we decided to do an upbeat, fun, journey video. Basically, the guys are at the gig and I’m at a hotel and I don’t wake up in time, so I’m on a journey to make it to the gig. Things just keep hindering me, and one of the main things, which happens really early, is that I get involved in a hit and run incident.

I get run over by our former drummer. Matt Wolfe exited the band right before we got signed with Metal Blade. He had been on every album previously. He was our drummer for a good 12-15 years. We thought it would be a way to let our fans that love Matt know that things are okay and we are still friends. He’s still a part of this band even though he’s not behind the drum kit. That’s why we asked him if he would do it, and he said, “Hell yes! I would love to run you over with a truck” [laughs]. We also had another cameo in it that most people don’t know, but in the video I get stopped by a bouncer at the show and I have to pay 20 bucks to get into my own show. The bouncer is the drummer for Skeletonwitch, Dustin Boltjes. He’s an old friend of mine.

Dead Rhetoric: Lyrically, what are some of your favorites on The Cicada Tree? There’s always some strong lyrical concepts with each Byzantine release.

Ojeda: I think, right now, the other one that is sticking in my brain is the title track [“The Cicada Tree”] because I’m able to write more in poetry…something more poetic. I write about the parallels between the cicada’s life and the band’s life. It’s basically a step-by-step of what happens to the cicada, but in actuality we are talking about the band. That one turned out really well.

There’s a song on the album called “The Subjugated,” that I’m really pumped about lyrically. It’s one of the darker songs on the album. Every album we have released, I’ve written one song about alien intervention and take-over. It’s been a story, so this is the sixth installment of that story. The aliens have just said, “Screw it you guys suck. We are going to kill most of you and enslave the rest.” The lyrics turned out really, really evil. I was really happy about how dark they turned out.

Dead Rhetoric: How important is it to keep things updated on the social media side of things?

Ojeda: It’s probably the most important aspect of marketing a band in this day and age. Right up there with playing a live show. It’s instrumental. When we got signed to Metal Blade, we had discussions with their social media guy, Vince. He basically told us our social media game sucked. “It looks like you only have about 400 fans and we know that’s not true. You don’t have a Twitter, you don’t have an Instagram.” So we’ve had to learn a lot over the last six months, in how to do this. It’s fun for us, because we are engaging people. We are pretty transparent, we just weren’t very savvy about it. It was just logging into Facebook. It’s something that we are learning after 17 years in, but we really enjoy it. It’s instrumental to keep fans up to date, because everybody has a Facebook account, or a Twitter and an Instagram…so we are trying.

Dead Rhetoric: What’s next for the band following the album’s release, outside of the Sacred Reich dates?

Ojeda: Right before we go out with Sacred Reich in September, we are going to headline shows regionally, in Tennessee, Virginia, and Ohio. Then we do the Sacred Reich tour after that…we are going to come home and basically spend the winter not doing anything. Maybe writing some music. No one really likes to tour in the winter and we all have families. We are domesticated, so we are going to spend Christmas and New Year’s with our families and kids. Then we are setting our sights of spring 2018 to start landing festivals. Metal Blade told us to make sure our passports are ready, we are probably going to Europe, Canada, Mexico…trying to expand our touring and doing some festivals. Hopefully if anyone is going to any festivals, they’ll see us on some bills.