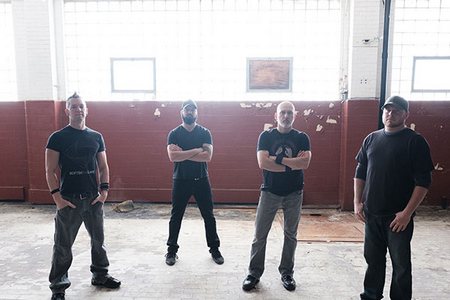 Perpetually heralded as one of the most underrated metal acts in recent years, Byzantine has always strived to push forward through hard work, and surviving against the odds. But after a storied existence in the underground (including a break-up after their third album and two more recent DIY albums), it appears that things are finally beginning to move in the band’s favor. The band signed with Metal Blade last year, and their sixth album, The Cicada Tree, is set to be released at the end of this month. Perhaps there is some merit to the adage of “good things come to those who wait.”

The band couldn’t have found a better time to receive a push from one of metal’s largest labels. The Cicada Tree is everything you’d expect from the veteran act, done with the grace and hunger of an up-and-coming band. The band’s ability to meld high-caliber musicianship with stellar groove is at its best for sure. In talking with vocalist/guitarist Chris “OJ” Ojeda, his enthusiasm is nothing short of infectious. He understands the band’s place in the world, and is certainly gracious for every opportunity, which comes through the page as we discuss said album, the band’s underdog status, and more.

Dead Rhetoric: After two self-released albums, what made you decide to go back to a label?

Chris “OJ” Ojeda: Well, I guess when Brian Slagel approaches you at a show and you don’t expect him to be there, and hands you a card and says, “gimme a call,” it’s a hard thing to turn down [laughs]. We didn’t expect to have any label interest at all. At that point, after we had released the last two DIY albums, I was fully prepared to release the third one through Pledge[Music] or a Kickstarter. I wasn’t looking forward to it, because it’s an incredible amount of work to do it yourself, but we were ready. Then when Metal Blade came, they are one of the only record labels out there that I would have considered doing business with, so it just worked out. It took us about 6 months of talking and getting everything lined up, and now we have a home. It’s a much better situation for us than doing it DIY, I can tell you that.

Dead Rhetoric: I can imagine, with having to come up with and do everything on your own…

Ojeda: And to be able to use the marketing arm that Metal Blade can give you, especially overseas. We would never have been able to achieve that [on our own]. On the last album, we spent close to 8-10,000 dollars of our own money on a PR campaign. It did well, but I’ve already seen the volume of interviews and print stuff for this one – it’s blowing it out of the water. I’m glad we didn’t have to put another 10,000 on a credit card for good PR this time.

Dead Rhetoric: You’ve been doing a PledgeMusic campaign in support of the album. Did this seem like a natural transition due to the other albums having crowdfunding?

Ojeda: That’s the way I view it. Our fans, over the last two albums, they kind of expect us to go there, and they were looking for it. I think now, at this stage, of how the music industry is…I think the record labels have realized that they need to work hand in hand with the crowdfunding campaigns if they really want to be successful. When we got signed with Metal Blade, they approached us and asked if we wanted to continue to do that, and just do a pre-order. That way, the campaign isn’t paying for the album, it’s already been paid for by the record label, but it allows fans to get their hands on merchandise and different tiers of stuff before the album comes out. It’s a good way for Metal Blade to extend their reach.

Dead Rhetoric: Personally, I really like the PledgeMusic stuff. Even if you are on a label, you can still put out some unique packages and different things for the fans that really want to get into it.

Ojeda: Me too – we tried to keep the cost down on ours as much as possible. I’ve looked at a lot of crowdfunding campaigns doing research for the last two albums. Sometimes they can get pretty pricey. Dealing with Metal Blade now, we have to go through them and there’s also a third party distribution company. For the last album, I was sending everything out of my damn basement myself. We had to keep the prices consistent to where everyone made a little bit of money, but the fans were still able to feel like they weren’t getting ripped off, and I think we’ve achieved that.

Dead Rhetoric: Where’d you come up with the ‘setlist boss’ option? I thought that was one of the cooler things you had available.

Ojeda: I don’t know what made me think of that, but it’s definitely put us on our toes. We have 15 tour dates with Sacred Reich. We thought, for 6 tour dates we’ll let fans pick our setlist and they’ll be able to have VIP access, meet and greet…if they want to sit at our merch booth or sit at the edge of the stage they can. We sold those out pretty fast. So we added three more, and we sold them. So now, over half of our tour, we don’t even get to pick our damn songs [laughs].

We are rehearsing hard now. Typically, we would rehearse 8 or 9 songs as a main support, and now we are rehearsing 20-22 songs so we can be ready. It definitely didn’t backfire, because it’s going to give us an opportunity to have fun every night and change it up, and avoid falling into a rut. I think the other benefit is one fan every night is going to feel pretty special. And that’s enough. If we have to jump through these hoops so that one person can go home and say, “that was one of the most fun shows I’ve ever seen,” then it’s worth it.

Dead Rhetoric: So are they giving you the setlists beforehand or do you have to do it that day?

Ojeda: They have already all turned them in. I’ve been contacting them through email and asking for setlists so we can start rehearsing the songs. They just give us the songs they want, and we add some of the newer songs, because we can’t expect them to know which of those songs they want us to play. Then we organize them as a cohesive setlist, and then on the day of the show, we’ll let them come in early, hang out with us, carry our amps if they want to [laughs], then we’ll show them their setlist and say that we are going to play it in this order and just have fun. I’m excited about it!

When we presented the idea to Metal Blade, our publicist said that they’ve never had a band on the label do something so bold [laughs]. I take that as a huge compliment that we were able to come up with something like that. You might see other bands do that down the road and then you’ll know where it came from first…our stupid asses [laughs].

Dead Rhetoric: Bands will be cursing you 10 years from now…

Ojeda: Exactly [laughs]! What we did, was we have about 60 songs in our discography and we narrowed it down to about the 20-22 that we know we can rehearse and play well. That way, we have a little bit of creative control, but out of those, they can pick whatever they want. That way it’s not a complete train wreck [laughs]!

Dead Rhetoric: With the album title of The Cicada Tree and the 17 year cycle – are you feeling optimist for your upcoming emergence for the release?

Ojeda: Yeah, I really am. There’s been a high level of optimism surrounding this whole album. The positive vibe album title, I think it really sets it off. We really didn’t have an album title late into the recording process. I was trying to look at song titles and nothing was sticking, and my girlfriend playfully told me, “why don’t you just name it The Cicada Tree?” Because we had all these cicada underneath a tree in my front yard. And I was like, “whatever, get outta here.”

Two weeks later, it just hit me – cicadas are 17 years old, they’ve been underground for 16 years. Our band, I read a lot, that people say that we are heralded as one of the most underrated bands. So I said, “Damn, we’ve been underground for 16 years, now we get to come out on Metal Blade and people get to hear our songs.” It gave me chills! The stars lined up for this one, and we then had an album title. Then when we hired Christopher Lovell, who also did the artwork for the last album, he just knocked it completely out of the park. It’s beautiful.

Dead Rhetoric: Were there any particular goals in mind for this album, with it being your sixth release? Or is it more about maintaining and tweaking the formula?

Ojeda: I think you are right with how you just described it – it’s basically keeping the train on the rails and not trying to derail ourselves again. We’ve made some stupid ass mistakes through our career. Breaking up the day after we released our third album was probably one of our biggest screw-ups. But you live and learn from that.

As far as right now, I feel really confident with the songwriting. We are upwards of around 60 songs, and it’s not like I’m on autopilot, but the song structures come pretty easy to me know because I’m not looking over my shoulder to see what other bands are doing. When you get to 17 years of longevity, you really don’t have to prove anything to anybody other than yourself. As long as I’m happy with the songs I write and the guys in the band are happy, then I expect that most of our fans will probably not hate it. It’s kind of proven itself that way. I’ve had some people tell me that they expect us to try to explore and expand. They don’t expect us to write the same album. That’s really liberating to know that we can do whatever we want.

Dead Rhetoric: It gives you that creative outlet, knowing that you keep a close knit relationship with your fanbase, that you can do that and still feel confident about it.

Ojeda: It’s a nice feeling. As an artist, if we just wanted to come out and write in the same style every time, that would get stale for me. It’s nice to know that the people that listen to our band are expecting us to throw some curveballs in every once in a while. Or have a nice ebb and flow, which for me, makes a good album listen. Not just a single, but from start to finish, you can go up and down and have peaks/valleys that keep the listener engaged.