Bruce Soord & Jonas Renkse – The Departer and the Nerve 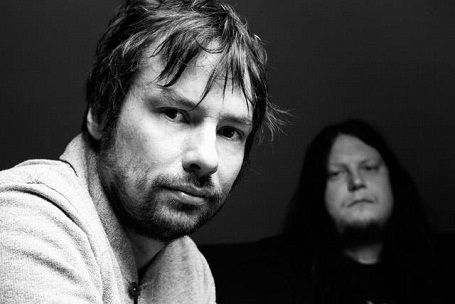 The Pineapple Thief is one those periphery bands for a lot of us; proggy, a smidge obscure, but with enough musicality that it will take the progressive-minded off the rails into different territory. And since they’ve never quite crossed over into metal’s rather treacherous and unforgiving terrain, the notion of main Pineapple Thief man Bruce Soord pairing with Katatonia’s Jonas Renkse begged the question: Could Soord make good use of Renkse’s one-of-a-kind vocals? Hold your fire: The duo’s Wisdom of Crowds does both men justice.

Hardly metal, yet able to function in the same sparse, do-more-with-less confines that Katatonia’s recent Night is the New Day and Dead End Kings have, Wisdom of Crowds puts Renkse’s carefully-considered vocals out front, much to the delight of the Katatonia die-hard contingent (yup, right here). There’s lots to be had with numbers like “Wisdom of Crowds,” “Frozen North,” and “Radio Star,” each of which showcase Soord’s inventive compositional abilities that merge post-rock, electronic music, and wide-open experimentation. Furthermore, it’s a reflective, near-depressive listen, which makes total sense: Renkse is the master of melancholy.

With this in mind, we grabbed Soord for a round of questions regarding Renske and the Wisdom of Crowds album. Here’s what the affable Brit had to say…

Dead Rhetoric: While Katatonia is not a tried-and-true metal band, they are very much considered to be a part of the metal scene. Being that you come from an entirely different scene, is there any sort of trepidation venturing into this territory?

Bruce Soord: I must confess I didn’t give it any thought until I started doing interviews and people started mentioning it, then I started to panic a little – all those scary long haired metal heads shouting at me!  But the response so far from the metal press has been great. Of course, it’s not a traditional ‘metal’ record but it proves that a lot of people in the scene are open to other styles.  Not everyone, but some of them.

Dead Rhetoric: Have you had much exposure as to what’s going on in metal these days?

Soord: Not as much as I did in the late 90s when I listened to it a lot.  Bands like Celtic Frost, Carcass, Entombed, Morbid Angel – I have fond memories of those times.  I do try to follow it though and I’m amazed how many bands are still going.  On the last The Pineapple Thief tour we bumped into Autopsy at the chunnel, still going strong it seems!

Dead Rhetoric: You wrote the songs for Wisdom of Crowds with Jonas’s voice in mind. Was there any specific album you leaned on the most, and why?

Soord: Not really, although I knew I wanted to make it quite dark and electronic but keep the guitars to give it some balance.  There aren’t that many people doing it, but if you listen to the major players like Chemical Brothers, Prodigy, Pendulum and Depeche Mode, it can certainly work.  I was also influenced by the old trip-hop and break beat scene, especially as I live near Bristol.  Back in the 90s everyone was slowing down break beats trying to sound like Portishead, including me.

Dead Rhetoric: Given that you both have rather busy schedules, were you surprised Jonas agreed to do the album? And how did you manage to fit in the recording?

Soord: I was really lucky to catch Jonas.  Katatonia had just come back from their US tour with Paradise Lost and Devin [Townsend].  Jonas’s agent got in touch and said he had a window, so Kscope got him straight on a plane and down to my studio for a week!  It was a great session, so relaxed.  Jonas was nailing the vocals so quickly we had plenty of time to relax and enjoy it.  The album would never have been released had we not got Jonas on board.

Dead Rhetoric: In comparison to what you do with Pineapple Thief, was this an easy album to make? Was it as collaborative as you wished?

Soord: It was really easy.  What is not well known is that it was Johnny Wilks from Kscope who got the project started.  I was collaborating with him for years on the music.  When Jonas came on board the music was done but that’s not to understate the contribution Jonas made to the record.

Dead Rhetoric: Since his first forays into actual singing in 1998 with the Discouraged Ones album, Jonas’s voice has matured and become more refined. So, was there anything in particular you were looking to get out of him other than his regular singing voice?

Soord: No, not at all.  It was interesting to hear his voice in a different soundscape though.  But I just hit record and let Jonas do his thing.  His style brought the album to life.

Dead Rhetoric: Jonas’s voice is almost melancholic by default. Did that help better connect with the lyrical themes of the album?

Soord: Yes, I think that’s why it worked so well.  Somehow, Jonas has a delicate melancholia that is also extremely powerful.  On paper it shouldn’t work with Katatonia, but it fits perfectly.

Dead Rhetoric: Katatonia’s music lends a lot of space for Jonas to sing – same for Wisdom of Crowds. Suffice it to say, are you fan of the “less is more” approach?

Soord: When it comes to vocals, a good song doesn’t need a load of guff taking away the focus.  So yes, I think “less is more” sums it up nicely.

Dead Rhetoric: There’s loads of variety and different sounds on the album. When composing these songs, was it obvious from the start that there would be no set format and/or template?

Soord: Yes, there were no rules, it was great!  As a producer, I had to be careful not to let it get out of control and I think I just about achieved it. It sounds cohesive to me.  But it was a lot of fun to get all the weapons from my sonic arsenal out of the cupboard and have a good play.

Dead Rhetoric: The title track of the album, “Wisdom of Crowds” has a unique, almost 20s-like feel to it. What’s the story behind this song and how did it become the choice for the title track?

Soord: I have no idea how it became the title track.  But I remember putting the initial brass synth part on, which defines it.  It’s actually an old mellotron sample which is probably why it gives it that 20s vibe.  It sounds like a brass section on an old crackly 78.  I’ve always loved the mellotron, such a haunting sound.

Dead Rhetoric: Finally, any plans to do a follow-up down the road?

Soord: Never say never.  Jonas and I have been talking about doing more, it really depends how this record does.  Hopefully we’ll be touring in December too.  Watch this space!