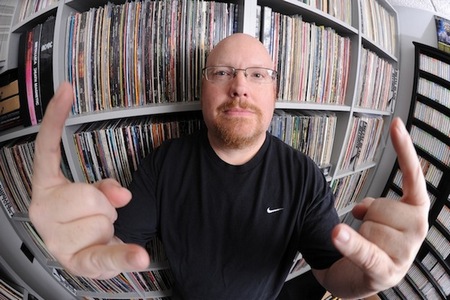 Dead Rhetoric: As someone who is still extremely passionate and dedicated their entire life to metal, what does it mean to be a metal lifer to you?

Slagel: It’s funny, when we all started out doing this 30-some old years ago, a lot of us that started in the first few years would call ourselves lifers. I don’t think we really realized that we would actually become lifers…but metal’s a great genre, where it really is a whole lifestyle. The clothes you wear, the things you do, the people that you hang out with – it encompasses your entire life. I’m just super lucky to be a metal fan who has been able to work with people in the industry and still remain a fan to this day. I guess at 35 years in I might as well call myself a lifer because I don’t think I’ll be changing too much from now [laughs].

Dead Rhetoric: As a big hockey fan, what do you see as parallels within the worlds of music and sports? Other than just being entertainment sources…

Slagel: I’ve been lucky enough to know people who work for teams and some of the players, and it’s really very similar. The whole [sports] world is so similar…if you hang out with a bunch of NHL people, they will be curious about the music side of things and I’m curious about the hockey side of things. We each get our looksee at the different worlds. But it’s so, so similar. The entertainment aspect is similar, but the rest of the whole world is very similar. The only real, major difference is that the NHL and sports in general, are way more conservative in terms of how they look to the public. They are appealing to a mass thing. We in metal are totally opposite – we want to shake things up. It’s really interesting though, how they are so similar.

Of course, the cliché that everyone talks about, which is 100% true, is that every rock star wants to be an athlete, and every athlete wants to be a rock star. I remember a long time ago, Metallica was playing The Forum in Los Angeles.…this was when Gretzky was playing for the [L.A.] Kings. I was backstage, and Lars was running around, somehow they had let him into the locker room, and he had Gretzky’s helmet on. He was like, “I’ve got Gretzky’s helmet on!” It was so funny to see – this drummer from Metallica, a big rock star, excited that he had Wayne Gretzky’s helmet on, because that way cooler than being the drummer of Metallica [laughs]. You meet enough of these guys that you realize that’s totally the way that it is.

Dead Rhetoric: What sort of traits do you look for when considering new bands to sign to the label? Are there certain qualities that you see, or at least want to see?

Slagel: It’s really tough – we’ve been doing this the same way, since literally day one. If I hear something that I like, I want to work with it. Anything else…it doesn’t really matter. I hear something that grabs me, I’ll want to work with it, and more often than not, and it’s turned out to be okay. That being said, there are things that make it a lot easier for us to do our jobs and allow our bands to be more successful. By no means…if someone walked in with a demo tape and never played a gig, and didn’t have any social media or anything, and we put it in and it was amazing, we’d still say, let’s do it. But clearly if you have something going already, it makes things a lot easier.

We like to see bands that, number one, want to work. They want to tour, and they want to get out there and support what they do, because some do and some don’t. Some sort of social media presence is really super helpful. That will just help get you noticed – if you are trying to do something, either getting into the local scene with the record stores/radio stations in whatever town you are in, especially now, the social media thing is so huge. You can reach people everywhere. Again, by no means would we ever sign a band…we’ve been down this road where we have had bands that come to us and say, “We have 50,000 followers on Twitter and 100,000 Facebook likes,” but if we don’t like the music…it’s all well and good, but the music has to be there first and foremost. The other elements certainly do help, I will admit that.

Dead Rhetoric: I’m thinking of more recent things with this, like Patreon or PledgeMusic, but do you see those kind of social media-based options as being pathways to go down further in the future?

Slagel: I think in certain ways it’s a bit of the Wild West now, so I wouldn’t discount anything. I think PledgeMusic is great, Soundcloud is great, I think Bandcamp is great. There’s a million different ways for people to consume and listen to music now. I think all of them have an interesting part to play in how we go in the future. Which ones are going to take hold and be the main ones? Spotify certainly has a big foothold right now, but you never know what way things are going to go.

I think that’s great – I love the fact that music is more accessible now than it has been, and it’s awesome because that means that people are listening. You’ve got more people listening and more people getting into music. It’s going to be a big help. It all seems good, and I think any element of any of that stuff is all good. We try to work with as much of it as we can. I’m excited to see how that stuff plays out too, because you just don’t know at this point!

Dead Rhetoric: Are you afraid at all, that as more and more people get access to it, that music becomes something that could be potentially taken for granted?

Slagel: It’s certainly possible; we’ve talked about this a lot. But if you look at the business model of the streaming services, for example. When I was a kid and I had $10, I had to figure out which of 10 albums I wanted to buy. Now, for $10 you can have every single piece of music pretty much ever recorded, pretty much everywhere you want to be. That’s pretty amazing, and a pretty good deal. It seems that more entertainment is being consumed more by that sort of streaming – Netflix, Spotify…this part of the world seems to be where people are able to access entertainment. That’s a lot easier and cheaper than it has been. I think it could go either way: it could become like, “eh, I’m just paying this much” and it kind of devalues it, but on another level, it does open people up to be able to hear more and hear whenever they want to. I worry about a lot of different things. I certainly worry about the future of rock and metal too, because right now it’s not in the mainstream and you aren’t seeing a lot of new artists pop up yet. Then again, we saw this in 1996 as well, and it came back full circle from there. We’ll see, it’s interesting times, that’s for sure.

Dead Rhetoric: Going off of that, what are you most excited about as you look towards the future of metal?

Slagel: There’s a lot of really good new bands out there. It’s very difficult to get anybody to notice them, but I do get excited about there being so much good new stuff on every label. On our label, we’ve got Allegaeon, Visigoth, If These Trees Could Talk – there’s tons of really cool new artists that are really interesting. That excites me. It’s going to take some time – a lot longer to develop artists, as far as being successful. You look at a band like Cattle Decapitation…almost 20 years in, people are going, “Hey this band’s really great!” It’s like, where were you the last 20 years [laughs]? But I’m excited – there’s a lot of good new music and a lot of good new artists, and I’m hearing more stuff every day. Probably more in the last 2-3 years than I have heard in a long time. I think moving forward, it’s going to be in good hands once the industry kind of settles a bit, which it seems like it is. Hopefully it’ll be good for everybody.