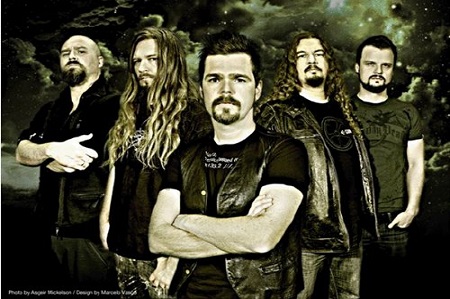 Because they never got totally sucked into the world of black metal, Norway’s Borknagar have long drifted along over the course of 17 years as the “thinking man’s” antidote to the sheared and brazen sound of their countrymen. Sure, they’ve taken the occasional dips in the BM pool (see: 1997’s The Olden Domain

and 2000’s Quintessence), but Bork’s sound has always been too multi-faceted, elusive, and frankly, cerebral to be layman’s black metal. They’re not too dissimilar from Enslaved, who have taken the same difficult, not-so-treaded path to escape the shackles of BM.

Making the band even more enticing, the vocalist spot in Bork has always been helmed by a noted figure in the metal underground. Original singer Garm (Kristoffer Rygg) helped launch the band for its first two albums, giving way to future Dimmu Borgir bassist/vocalist Vortex (Simen Hestnæs) who lent his superior talents to 1998’s near-perfect The Archaic Course and the aforementioned Quintessence. Vortex would proceed to bolt for Dimmu on a full-time basis, allowing solo artist Vintersorg (Andreas Hedlund) to assume vocal duties starting on 2001’s Empiricism where he’s been ever since. In a quasi-surprising move, Vortex rejoined the Bork fold in early 2011 for the release of this year’s stellar Urd. And Bork is nearly untouchable again.

When speaking to founding member/guitarist/principal songwriter Øystein G. Brun, one can get the sense the man is in a state of euphoria. And how could he not be? He has arguably the best vocal tandem in extreme metal, a stable lineup, a renewed relationship with label Century Media, and an excellent new album to boot. So without further waffling, we hit “record” on our recording device (it’s an old tape recorder) and off went Brun…

Blistering.com: I think it’s pretty cool how things have come full circle now that Vortex is back in the band. Did you ever expect this to happen?

Øystein G. Brun: Oh yeah, what can I say? I’m like a little kid. It’s different…we had other lineups that had been working perfectly well, but now that Vortex is back, it’s just like, yeah, it fits perfectly. The whole vocal piece, it’s just great, actually.

Blistering.com: It feels right to have him in the band.

Brun: I think you’re right. We had him do some guest vocals on the lastUniversal [2010] album on “My Domain,” and we hadn’t worked together for a decade. Just being there with him was just magic. It was all very easy and his position in general in the band feels so good. Plus, I feel like a very lucky man – he’s one of my favorite vocalists. I love his stuff and I love Vintersorg’s…his vocal lines are just brilliant as well.

Blistering.com: You walked right into my next question: For a songwriter like yourself, what’s it like having two excellent vocalists at your disposal? A bit of a songwriter’s wet dream, eh?

Brun: Yeah, I was really excited about [it]. I thought of ways Vortex’s vocals could combine with Andreas’ vocals and how they could blend together. But at the same time, they’re each such good vocalists, for this album, it’s more like let’s let the two of them do their own thing; let’s not do the [dual] vocal thing too much. We didn’t want to do a cappella album [laughs]. Vintersorg has been in the band long enough, so he knows how we write songs and things like that, he fit in from day one. The vocals for the new album just came naturally. I didn’t have to sit down and go “This is where he’ll sing and this is where the other guy will sing.” We didn’t worry about schedules or shifts…we just waited to see how it turned out.

Blistering.com: Getting down to the songwriting aspect, was it hard to figure out certain parts for both vocalists when you knew both could do the job properly?

Brun: I don’t really think about that outside of the basic framework of the song, actually. I didn’t give too much thought into the parts other than what the melody would be. From my point of view, I tried to keep the vocals as open as possible, and see what would work best. I like that “open” element. I’m more like, “Here’s the song, what do you do?” At some point, it was easier to figure out who would do what, and there are times when Simon is doing backing vocals are vice-versa. I was looking for whatever makes the song the most powerful, honestly.

Blistering.com: I think a really cool example of that is the Metallica cover of “My Friend of Misery.” Vintersorg totally nails it.

Brun: I’ve always liked that song, and the reason why we did that song was the fact that Metal Hammer magazine in Germany was having a special CD release to commemorate 20th anniversary of the Black Album, so I think we had two options which was this song and “Don’t Tread on Me,” which Vortex ended up doing with his solo band. We didn’t have too much of a choice, really [laughs]. It’s my favorite song on that album and I think Andreas did a great job. That song turned out really well and was the spark in the new album. It was a good start, a nice intro for the production of the actual album.

Blistering.com: I read somewhere that you felt like Urd was bringing you back to the “core elements” of the band. What did you mean by that? Do you think you got away from Borknagar’s core on previous albums?

Brun: Not really. One of the challenges of being a band like ours that suits the progressive elements and has been around longer than 10 years is you actually progress, but at the same time, there are so many bands that leave their identity. For me, it’s important from time-to-time to see where we are, to see if the anchor is still there. On this album, absolutely, I wanted to go back to the old songs and try to find some of elements from the past, like, what made The Olden Domain a good album? We don’t compromise it, and it’s no fun if you recycle old riffs and ideas. I think the production for the new album is better; we spent much more time on the production, getting the sounds for the drums and guitars.

Blistering.com: You mention going back to some of your earlier albums and Urd reminds me of Quintessence. Do you have the same feeling?

Brun: [laughs] I think it’s interesting that kind of feedback. I spoke to another journalist in the U.S. and she said the album reminded her of The Olden Domain[laughs]. It’s more interesting because different people respond and listen to our music in a different way. Some people easily focus on certain elements that I’m like, “Oh, cool!” There’s some traits definitely that are from Quintessence, but it’s also a blend of Empiricism and even some stuff from The Archaic Course, actually. I’ve always felt that we’re a band that’s always expanding and expanding, but the root concept is still there.

Blistering.com: Speaking of roots, you were one of the first pagan/epic metal bands to come out during the 90’s, and now these bands are everywhere. What’s your take on this scene?

Brun: I don’t pay too much attention to it, honestly. I did when we first started, but in the last couple of years I have really distanced myself from it. I remember back in those days, there were all kinds of black metal bands to check out, but I’ve limited myself these days [laughs]. I think it’s cool, though. Some songs are a bit…powerful. These bands are using some of the same elements we used on The Archaic Course like in-tune vocals and Hammond organ, so I think it’s cool.

Blistering.com: Let’s have a quick breakdown of each of your studio albums, so I’d like to get the first thing that comes to your mind when I bring up a particular album. Let’s go back to the beginning with 1995’s self-titled album.

Brun: [pauses] Extreme passion and the kind of dedication to do something new. To love something in a certain way.

Brun: To me, for some people, it’s our first. That’s the album that gave us and established our sound. Some people consider the debut more of a demo, butThe Olden Domain had a good production and was groundbreaking for us.

Brun: That’s the album that is really close to my heart. I have a really good feeling and is one of those albums that I can listen to as a listener and enjoy, without having to think about what we were doing [laughs]. I love that album.

Brun: Aggressive. That’s the lineup he had at the time. After The Archaic Course, we wanted to do something more aggressive, but it’s also a bit emotional. I love the feeling of the album.

Blistering.com: Moving along to Empiricism [2001].

Brun: A new vocalist, which was Andreas. It was some kind of a new deal for us. We changed studios, so it was different to record that album. I don’t remember too much recording that album, but it sounds fresh.

Blistering.com: How about Epic from 2004?

Brun: With that album we wanted to speed everything up. We made everything complicated; philosophical songs and philosophical lyrics…we just wanted to take the next step up. I have mixed emotions honestly, there’s so many great ideas, but we got a little too ambitious.

Brun: I love it. It’s a very personal album for me, actually. It’s something I wanted to do from the very beginning of the band. We were told doing that would be commercial suicide, but we did it anyway [laughs]. I always wanted to show the acoustic side of the band, so for me, I write most of the songs on an acoustic anyway, so it worked.

Blistering.com: And finally, Universal from 2010.

Brun: Back to basics and there was a lot of attention to detail. I think the songs are great, but I think the album suffers from the production. There’s something from the mix that I don’t like. The songs turned out really good, but I know the songs from the inside-out, but the mix could have brought out more of the melodies. It’s a good album, though.

Blistering.com: Along the same lines, what would you rank as your best moment as a songwriter? I’ll point to the final moments of “Ocean’s Rise,” [off The Archaic Course] where you drop in the acoustic guitars. What’s your best moment?

Brun: I have a couple of ideas, but the one that I’m always amazed by is “Universal” from The Archaic Course. The mid-section, the riffs were very central and I remember being “Wow, this is going to be very good!” Then Simon came into the band and did some vocals and we were all “Wow!” That was one of the moments that was pretty good for me. Probably the most important, actually.

Blistering.com: What’s the touring schedule looking like? I know you’re selective in what you do, so what do you have planned for this year? Rather, any plans to make it back to North America?

Brun: I would love to make it back to the U.S. I think all of us. For us, it’s a time issue, but we will be doing more live sets than the last five-six years. We all have lives, kids, and such, so it’s a little complicated than it was before. That part makes it hard. I really want to go to the States and our tour with Emperor [in 1999] was one of our best. At some point, we’ll do it. I just don’t know when.