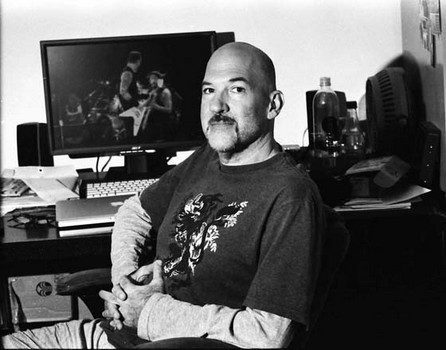 Dead Rhetoric: Going along with what we were saying before about the smaller acts, do you think there were any underrated 80’s thrash bands from that LA scene that never got credit or more successful than they should based on what they were doing at the time?

Nalbandian: Yeah, I always liked the band Abattoir. Juan Garcia, who is in Body Count now and was in Agent Steel, his first band Abattoir were a Pasadena-area band and they were one of the top bands. They helped bands like Slayer and Megadeth, they got those bands on the bill. They got into Hollywood and did some shows out there, because they had a really good draw, and a lot of loyal fans. They did really well – I thought they were a good band. Going back later into the ‘80s, you had a lot of the crossover bands, like Cryptic Slaughter. Obviously Suicidal Tendencies had done very well. Hirax was another band. You have other bands like Excel that artists talk about in the documentary that were crossover punk/metal. That did pretty well – it had a big fan base, but never made it to the mainstream.

Of course, no band back then ever thought they were going to make it into the mainstream. Until Metallica started getting noticed, and it became, “Wow, we could actually get popular!” But at the time, bands were just doing it for the love and for the fun. But yeah, I don’t want to pin-point one band or another, but there was a band called Savage Grace that were really big. They were more power metal meets thrash metal…they called themselves ‘thrash with class’ and they were one of the earlier Metal Blade bands. I believe the third or fourth record that Metal Blade put out was a Savage Grace EP. But they were quite big during that era, so yeah, there were quite a few bands actually.

Dead Rhetoric: What’s your process to making the film itself? Do you map out an idea of how you want the story told or do you just document, interview everyone, and then decide how to edit it down from there?

Nalbandian: We just did a shitload of interviews. I first got the offer from Warren Croyle, the executive producer and the owner of MetalRock films, he’s quite successful at doing DVD as a production company. He does a lot of DVDs about conspiracy theories – UFO, Bigfoot, and aliens. But he was always an old school metal fan. In fact, he engineered a lot of the old Combat Records releases. He was a music engineer in L.A. and worked with a lot of those early bands like Abattoir and Megadeth. He always wanted to do something metal, so he and Joe Floyd [the producer], who was in a great L.A. band called Warrior, they were talking about doing a documentary on the L.A. scene, and I had known Joe pretty well. I used to do a podcast several years ago and he asked me to direct it. I brought Carl Alvarez into the project because Carl is a master of knowledge when it comes to everything L.A. metal.

So we had a really good team. I just went about getting as many interviews as we could. We didn’t really have it set out how we would separate the titles. We just did like 80 interviews! I called up all the people I knew and just interviewed them all. We all collectively decided, but I said, that I didn’t think we should go past ’86. That’s when it just got ridiculous and it’s been covered. Poison, Warrant, Slaughter, Faster Pussycat, even Guns N Roses – they’ve been covered a million times. We didn’t need to cover that again. It wasn’t really my scene. But the early parts, before Motley Crue and Ratt – all these artists were in different bands. Dokken…you had George Lynch in Xciter playing with Van Halen back in the late ‘70s. It was more of just L.A. musicians, and that’s what I wanted to capture. So we cut it off at about ’86 and then rather than going deeper into the ‘80s, and we decided to do something about thrash.

My thing was to give credit to a scene that never really got it’s due. I think the L.A. thrash scene got so overshadowed by the glam rock movement. Of course, San Franscisco took ahold of the flame, as they say, and took off with it as soon as Metallica moved up there. There’s a whole section [in the documentary] where the bands talk about how they all went up to San Francisco. Metallica, Slayer, Hirax…all the bands would go up there to do shows because they had more of a fan base. The clubs were much more fan-friendly, whereas here [L.A.] the Hollywood clubs didn’t want the bands, so they had to play on the outskirts, in the ghettos, and in east L.A., south central L.A., in places like Fenders Ballroom and the Olympic Auditorium – that’s why it remained very underground. The thrash scene just kind of got pushed aside in L.A., but it was huge! It was a big scene. So we wanted to document it – not just the big bands that made it, but L.A. had a thriving thrash scene.

You mention L.A. and everyone thinks about Guns N Roses, Motley Crue, and glam right away. That was huge, no doubt about it. But there was an underground scene in thrash that kind of crossed over with punks – the Slayers, No Mercy, Excel, DRI – they started playing together. The punks and metal found a whole new thing, and a lot of violence. Because of all that, none of the commercial clubs would allow these bands, so it remained very underground. 30-35 years later, I think the story needs to be told about what the scene actually was like, through the opinions of those artists that played there. I had David Ellefson narrate because he was such a huge part of that scene with Megadeth in the early years. He was very knowledgeable about all the clubs and everything going on. He was a perfect guy to narrate the title.

Dead Rhetoric: As you just alluded to, one of the things that also comes up in the film is how the L.A. based bands themselves didn’t want to be associated with L.A. [due to the glam scene]. If that stigma didn’t exist, do you feel that history would have been written differently in regards to L.A. and San Francisco with their importance to the thrash scene?

Nalbandian: Definitely – there’s actually a lot of reasons I think. Hollywood, as David Ellefson points out in the documentary, is an entertainment capital. It’s all about the glam, glitter, and glitz. The glam rock scene was always big in Hollywood, going back to the ‘70s with bands like Angel that came into L.A., as well as the early Quiet Riot, Legs Diamond, and all that. It took more from the British glam, like Sweet and that sort of thing. So did London, Nikki Sixx’s old band. That scene was always big in L.A. The thrash bands were always the outsiders. When Metallica tried getting into the L.A. clubs – I saw them with all the bands like Ratt and Steeler, and all the L.A. bands playing at the time. From the fans in the clubs – they just didn’t didn’t cater to them.

They had to find their own niche, so to speak. L.A. is very spread apart – Orange County…the clubs there were a lot more open-minded when it came to booking metal and punk. There was a club called the Cuckoos’ Nest, where if you watched The Decline of Western Civilization Part I [documentary], it was all on the Cuckoos’ Nest. All of the bands like Black Flag, Dead Kennedy’s, The Germs…that was their stomping grounds. Even though Orange County was a conservative city, the clubs catered to the thrash and punk scene. But not nearly as much as San Francisco did. The clubs in the Bay Area were very open-minded to thrash. That’s why the L.A. bands were going up to San Francisco. I think it had a lot to do with guys like Ron Quintana, who had the Metal Mania fanzine, and also had a metal show on KUSF. San Francisco is very small, geographically, where L.A. is super spread out. You can have a college radio station in L.A. at 3,000 Watt and it doesn’t mean shit. But in San Francisco you can get it across the whole city.

So there was a lot more fan appreciation in the Bay Area. The L.A. bands were going up there, because they could only play the Orange County shows so much, and they are on the outskirts of L.A., so they figured if they weren’t going to conquer Hollywood that they could go up to San Francisco. They were treated great up there. That’s why Metallica ended up moving up there when Cliff [Burton] joined the band. A lot of the early shows from Slayer and Megadeth…Megadeth’s first shows were in the Bay Area. A lot of these bands did not want to be associated with L.A., because you mention it and you think glam rock. That was the stigma…fuck the poseurs, you know. No glam-fags, as they used to say back then.

The thrash bands did not do well in Hollywood, so to speak. When people think L.A., they automatically think Hollywood, but it’s so huge. You have the outskirts, like east L.A., which was very hardcore/thrash metal…a lot of gangs and that kind of stuff. That’s why when you had bands from New York and even the Bay Area came to L.A., they would say “Holy fuck dude, we always thought L.A. was the poseur capital” but they would be playing at places like Fenders Ballroom or the Olympic Auditorium and they would say, “We’ve never seen so much violence than playing in L.A.!” You had a lot of the L.A. gangs – the punk gangs and the Latino gangs that would come to these shows. I was at a few of these shows and it got pretty scary. There was a lot of blood for sure. It was crazy!

Dead Rhetoric: A bit different than the way things seem to go about nowadays…

Nalbandian: Yeah, and I love a lot of these newer bands that are keeping that momentum, and keeping the thrash metal sound and vibe alive…I think it’s great. But you see some of these bands play House of Blues and it’s like “Wow!” The thrash bands back in the day never had the chance to play at clubs like these. It was like ‘anything goes.’ The Hollywood clubs and The Country Club, which was the big place – a lot of these bands…Metallica ended up playing there and did the Kill ‘Em All tour at The Country Club with Raven. They played many shows with Armored Saint there as well. Slayer played there several times, so they did open up to the thrash bands, but they had such heavy security. If anyone stage-dived or started slamming, they would just throw your ass out and beat you up in the process.

But when you played clubs in east L.A., they didn’t give a shit. Fenders had some major security – they had to. But it was still almost like ‘anything goes.’ Bands would play down at Iguana’s in Tijuana, Mexico – literally people would be stage-diving off the balconies at shows. I never actually went to any shows at Iguana’s, but I heard it was nuts.

The second part of Kyle’s chat with Bob Nalbandian will post tomorrow, January 22, 2018.