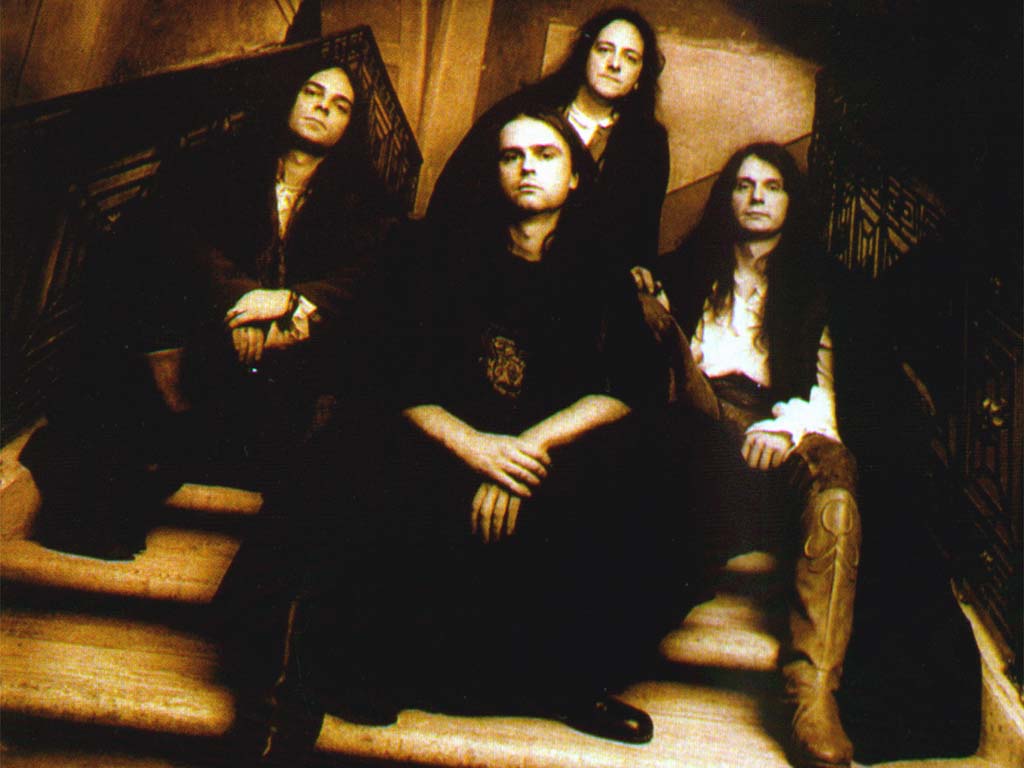 When Blind Guardian broke onto the scene in the late 80s/early 90s, the power metal arena was dominated by Helloween and various soundalikes. The formula created by Kai Hansen and Michael Weikath was there: fast double-bass, speedy, melodic guitar riffs, and a helium-induced singer, and it soon spread like wildfire on both sides of the pond. As fate would have it, the ‘Weenies became sidetracked by legal troubles with then-label Noise Records, released the awful Pink Bubbles Go Ape and Chameleon albums, thus opening the door for BG, who have never looked back. Part of the defining trio of German power metal bands (Gamma Ray also factors heavily into the mix), Blind Guardian’s run in the 90s is essentially why we’re still raving about them today – these albums are mandatory, timeless bodies of work.

Like we did for Katatonia (another band Blistering holds near and dear), we’re going to take a snapshot of each of the band’s studio albums, with supplemental commentary from singer Hansi Kursch. While there is a unified front on the band’s albums from the 90s, it’s everything around that era that is up for debate, which is why we’re going to sit and wax away…

Battalions of Fear (1988, Virgin)
Fresh off a name change from Lucifer’s Heritage (Blind Guardian is a muchbetter pick), the spry Germans unleashed a debut that was more speed than power metal. As with any debut, there’s this juvenile glee to Battalions of Fearthat when combined with BG’s influences (Helloween, Metallica), amounted to an uneven, but highly promising album. Hansi Kursch’s vocals weren’t fully realized, but that didn’t stop songs like “Majesty” or “Run For the Night” chalking in as early signs as to what lie around the corner. By the way, what’s up with the album cover? Tracks to watch: “Majesty,” “Run For the Night.”

Follow the Blind (1989, Virgin)
In essence, a re-write of Battalions, Follow the Blind is worth the price of purchase based on album opener “Banish From Sanctuary” and perpetual live staple “Valhalla.” On the surface, the band’s ideas weren’t quite there yet, even with the aid of Kai Hansen, as numbers like “Hall of the King” and “Damned to Madness” fail to resonate, even if the Guardians were tinkering with big choruses. Nevertheless, the aforementioned “Banish From Sanctuary” and “Valhalla” are two of the strongest songs in BG’s catalog, a pair that brought German power metal into the 90s in style. Plus, who can deny the live glory of “Valhalla” when practically all of Europe sings along? Not a soul. Tracks to watch: “Banish From Sanctuary,” “Valhalla.”

Kursch: It was a masterpiece for me, because we were able to work with Kai Hansen for the first time ever. For us, it was the breakthrough because a genius like Kai was working with us.

Tales From the Twilight World (Virgin, 1990)
The start of what is the greatest run of albums in European metal history, Tales From the Twilight World saw the Guardians hit paydirt by simply refining the formula on their first two albums. The speed is there, the monster choruses are there, and when coupled with a heavy dose of melody from lead guitarist Andre Olbrich, what you have is a near-masterpiece. Not a dud track in the bunch, with the band’s patented “group” chorus effect coming into play in essence, for the first time, just bear witness to the refrains on “Welcome To Dying” and “Lost In the Twilight Hall.” It catapulted the band into a new stratosphere, and the timing coulid haven’t been better – this was the album that truly started it all. Tracks to watch: “Welcome To Dying,” “Goodbye My Friend,” “Lord of the Rings.”

Kursch: That was the make-it-or-break point in our career. Back then, everyone said the third album was the most important in our career because you will be rated after that point. It had a massive impact and we did some really cool stuff.

Somewhere Far Beyond (1992, Virgin)
A quick, lateral step from Tales…, Somewhere Far Beyond kept BG right and firm in the speedy power metal fray, with second track “Journey Through the Dark” picking up where Tales… left off. More variety on this one, including the soft “Black Chamber,” triumphant “Theatre of Pain” and massively underrated “Ashes To Ashes.” And of course, there’s “The Bard’s Song.” As we gushed about in Part I, perhaps no song of Blind Guardian’s stands taller. The “forgotten” album of the band’s glory years, Somehwere… remains surprisingly strong and sturdy in all facets, which of course set up the band’s next two superlative albums…Tracks to watch: “Journey Through the Dark,” “Ashes to Ashes,” “The Bard’s Song (In the Forest).”

Kursch: The only time I felt we didn’t get too far away from the album before. There are some elements on Somewhere that you can easily make out Tales From the Twilight World. I was not really sure about that one.

Imaginations From the Other Side (1995, Virgin)
In what could be the second greatest power metal album off all-time (the first would be Helloween’s Keeper of the Seven Keys Part II), Imaginations From the Other Side not only boasted the band’s finest production to date courtesy of Metallica producer Flemming Rasmussen, it shot the band into headliner status across Europe and increased the buzz in North America. As for the songs, there’s a virtual glutton of world-beating numbers here, starting with “I’m Alive,” through “The Script For My Requiem” (there is none more moment in BG history than the 1:37 mark here), and “A Past and Future Secret.” The choruses are emotive, Olbrich’s leads are searing, and the intensity, urgency and all-out songwriting genius hasn’t been touched in 15 years. Godly. Tracks to watch: “I’m Alive,” “The Script For My Requiem,” “Another Holy War,” “As the Story Ends.”

Nightfall In Middle Earth (1998, Virgin/Century Media)
When Nightfall hit, no longer were the Guardian’s the best-kept secret in Euro power metal. The buzz and fervor over the band hit seismic levels in North America, prompting Century Media to pick up not only Nightfall, the band’s back catalog starting with Tales…. Like most things in the band’s career, it was timed perfectly, as Nightfall was rightly labelled as “The Blind Guardian fan’s Blind Guardian album.” With an elaborate concept based off of Tolkien’s The Silmarillion, Nightfall was easily the most orchestrated effort yet, with triumphant numbers like “Nightfall,” “Mirror Mirror” and “Thorn” taking the band away from their pure-speed phase into calculated, grandiose realms. Perhaps the most revered BG album, it capped a string of albums that cemented the band’s legacy. Tracks to watch: “Into the Storm,” “Blood Tears,” “Thorn.”

Kursch: My biggest challenge and my biggest success, so far. It was great working with Flemming Rasmussen and Charlie Bauerfeind. It was great fun, but a very stressful period in our lives.

A Night At the Opera (2002, Century Media)
After Nightfall, there really was nowhere for the Guardians to go but down, unfortunately. For an album that took four years to make, it sounded like it took BG 40 years to create, as evidenced by the overwhelming amount layering across the board. A Night At the Opera is too orchestrated and the ensuing backlash mildly rattled the band. Nevertheless, the album did give birth to “And Then There Was Silence,” a 14-minute epic that continues to find its way into the live set. “Battlefields” and “A Punishment Divine” are keepers as well, but this is simply a case of the band getting a little too out-of-hand, which is understandable – how do you follow up an album like Nightfall? You can’t.Tracks to watch: “Battlefields,” “Under the Ice,” “And Then There Was Silence.”

Kursch: It was the biggest pressure for any album, but the most underrated Blind Guardian album.

A Twist In the Myth (2006, Nuclear Blast)
The first album to feature a drummer other than Thomen Staunch (who was replaced by Frederik Ehmke), A Twist in the Myth has its merits, moreso than its predecessor. This could be Kursch’s most underrated vocal performance to date – just check out his rafting-reaching highs during “This Will Never End.” Lead single “Another Stranger Me” is hook-laden, as is the Peter Pan-inspired “Fly” and “Carry the Blessed Home.” Not quite there in terms of their majesty from the 90s, A Twist has been able to comfortably reside in the band’s catalog without much fanfare. Tracks to watch: “Another Stranger Me,” “Fly,” “The Edge.”

Kursch: The most modern of our albums and the most…courageous.

To read about the band’s latest album, At the Edge of Time, click here