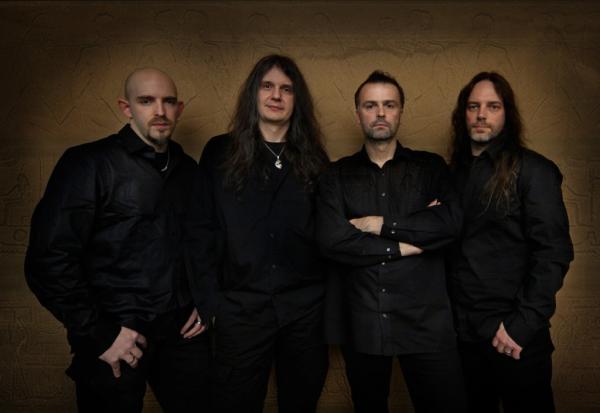 “The fear of today…it will be gone due to our magic songs.” – “The Bard’s Song”

Gracefully entering the twilight portion of their career, Blind Guardian’s legacy will not be hinged on how they single-handedly saved power metal in the 90s, but how they’ve effectively created a fantasy world that has yet to alienate anyone, including the most staunch of power metal foes. When lead bard Hansi Kursch tells a story, one can imagine him gathering his comrads around a campfire, eyes wide, expressions-a-plenty. The virtues are always the same with BG – good always prevails over evil, belief in oneself is paramount. Perhaps this is why songs like “The Bard’s Song” (which this scribe is utterly convinced is auto-biographical, despite Kursch’s claims to the contrary) will forever endure – there is a degree of honesty and understanding within the band’s mythical realm that no one power metal has been able to match.

The band’s newest is At the Edge of a Time, an album that goes out of its way to acknowledge the band’s glory years of 1989 to 1998. Not only does it recapture the blazing speed of times of yore (see: “Tanelorn,” “Voice in the Dark”), it effortlessly blends all eras of the band, past and present, including the lukewarm Night At the Opera and 2006’s mostly good A Twist In the Myth. If anything, it further cements BG’s status as the lead PM band on both sides of the ocean.

In the first of a two-part chat (Hansi and this scribe got on quite the roll…), the affable and freshly-shorn frontman discussed the new album, the meaning behind “The Bard’s Song,” and the enduring magic of Imaginations From the Other Side…

Blistering.com: Before we get into anything, you cut your hair. Why?

Hansi Kursch: [laughs] I have become a grown-up, I’m in my 40s. I just felt the need to do it for when we finished touring for A Twist in the Myth and it was getting harder and harder to take care of the hair. After having some serious discussions with my wife, we both agreed this was the right thing to do. It makes my life so much easier. I was a little unsure how short I should I cut it, but after having discussions with the guys in charge of cutting my hair, it turned out fine.

Blistering.com: You’ve been releasing an album every four years, so this is the pace you’re comfortable with or is just how the songwriting process turns out?

Kursch: I wouldn’t mind releasing new albums more, but we don’t have a problem with it because quality comes first. If the song or a whole album demands more time, we certainly pay attention and give it the time needed. I would not expect us being far quicker, with the exception of the orchestral project [BG’s long-discussed orchestral interpretations – Ed.] and it might be the next album. I would say we’re close to being finished, but we’re not making a lot of plans for it yet.

Blistering.com: Does writing happen slower than in the early days? For comparisons sake, you were cranking out albums at least every other year when you first started.

Kursch: It’s about the same way. The quality has changed a little bit, so that makes it a little more difficult, which is the probably the main reason. For the sake of discussion, Andre [Olbrich, lead guitars] will come up with two or three different arrangements and we’ll talk about them, then he goes back and fixes it, then I go to do the vocals. If I have a vocal part that he dislikes, I have to do it again. This is the probably the main reason – we’re just with each and every part trying to come up with the perfect solution for the two of us, and that probably takes a little bit longer.

For Somewhere Far Beyond and Imaginations, the complexity of each and every individual part wasn’t as big as it is now because there’s more stuff going on. Also, for Somewhere Far Beyond and Imaginations, we didn’t tour as much. We were out for maybe six weeks at the most for those. Nowadays, we’re doing something in between 12 months and 18 months, so that also causes some delay.

Blistering.com: You and Andre have been writing together for well over two decades now. Describe what happens when the two of you get together to write.

Kursch: We don’t have to talk a lot anymore. It’s always very stated or obvious for one or the other and there is 100% trust and that adds to the value. We both value the opinion of each very highly, so that makes it easy. He comes up with a certain arrangement of instruments and I do my stuff for the vocal melodies, so it’s equal how we work. I get into the arrangements when I feel something is missing or I feel it’s going in the wrong direction. Later on in the production, I’ll influence the arrangements if that’s still the case. When I’m doing the vocals, we sometimes work together. It’s good job sharing. The other one knows exactly what the other has to do.

Blistering.com: At the Edge of Time has its share of nods to your earlier works. When did that become evident and was it pre-determined you’d go that route?

Kursch: At the very end of the songwriting process, it became obvious. And when we started on production, it was clear that some of what we had did possess the spirit of our earlier stuff. The first impressions in the band, I was suggesting “Wheel of Time” as a first single or “Tanelorn” for those reasons, but at the very end, the band and Charlie Bauerfeind decided that “Voice in the Dark” would be the choice because it contains a little bit of each era of the band. It’s a very defining song from the album. It has Follow the Blind-aggression, and a little bit of songwriting of A Twist in the Myth and A Night At the Opera. We were out to prove that all of the elements can be woven into one song, and it had the strongest intensity of all of the songs.

Blistering.com: You referenced “Tanelorn,” which might be my favorite of the bunch. That’s definitely a nod to Tales From the Twilight World.

Kursch: We considered that to be our retro-metal song [laughs]. We don’t consider it to be an original, Blind Guardian song. We were referring to our early songs and the albums from the late 80’s. We consider it to be the most thrash metal song we’ve ever done and it changed a little bit when we created the chorus part. For “A Voice in the Dark,” there was certain diction that we used that we had from the 90s that a had a very pop-ish, so switch to a 2010 chorus, it start to sound very fitting and that we were thinking about the 90s and 80s with that one.