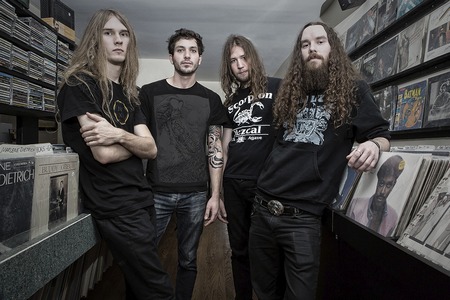 Dead Rhetoric: Both the EP and Terms of Surrender have black and white covers. Is this intentional?

Akin: I don’t know. The first one was a guy from St. Louis [Coby Ellison] and we kind of just bounced ideas back and for with him. He’s a great friend of mine and a great artist. We decided from the beginning that it would be a black and white cover. Terms of Surrender was done by Brandon Holtz, and it’s just incredible. Everything I’ve seen that he’s done has been like, “whoa.” Very detailed and meticulous and a lot of it is black and white. The next record might be a painting or something, I don’t know. But we wanted to continue on in that same kind of idea. Brandon I think, killed it. I love the work he did on this record. I saw it and kind of lost my shit. I can’t believe this is on a record that I did. I was pretty knocked out by it.

Dead Rhetoric: I’ve seen Black Fast described as “progressive blackened thrash metal” – do you think you’ve covered all of the bases with that one?

Akin: I don’t have a good answer for you on that. When strangers come up to me, do I say that? No. I tell them that we play heavy metal. It’s interesting that there are 3-4 parts to that tagline. It’s a mouthful. I guess it’s good in a way, because you can’t just say it’s this or that. People don’t say, it’s a thrash band or whatever. Whether that’s a good or bad thing. I hope it isn’t a detriment, because when people try to put us in a genre or tagline, it’s usually a couple words.

Dead Rhetoric: Much of your writing process is done in your practice room. You all write together then I take it?

Akin: There’s not really any rules to our process. Our bass player is a very proficient guitar player – he’s better guitar player than I am. He writes riffs, Trevor writes riffs, and I write riffs. So we always have an overabundance of riffs. We’ve just been widdling away at our process, just kind of subconsciously. Songs kind of come together a little bit easier these days. Really we just come into a room with a shitload of riffs. We have so many that we give them stupid names that don’t mean anything and put them up on a board. We just riff a whole lot and at some point you just figure out what goes with what and eventually the song will take you where it wants to go. Then you fill in the wholes. When we do that, we get the skeleton of it and we’ll jam that song for a few months and at any given time there are 4-5 songs in that state, waiting to be finished. We usually stay pretty busy in that regard. It’s a matter of just doing the work to get them done. When we feel that we have a finished song, we’ll do a rough recording and then I’ll write the lyrics to them. Not a very exciting process but there’s no rules to it. It’s never like, “we are going to write a song like this, or like that.” Its whatever we feel like doing at the moment.

Dead Rhetoric: With technology at this point, many bands just email each other parts of songs. Do you feel it is better to be in the same room where you can bounce ideas off each other instantaneously?

Akin: That’s another thing that’s different for everybody. Some bands can live on different parts of the world and write amazing shit, and it works for them. For us, I don’t know another way to do it. We aren’t that savvy with doing all of the programming and emailing. We don’t do that. I live with Trevor and Ross lives two minutes away – so does Ryan. We all live in the same neighborhood and we see each other all the time, so we do it organically. If that even counts as a way to do it – organically. We don’t know any other way.

Dead Rhetoric: Now I only bring this up because it was mentioned on your Facebook – what’s up with that picture of you on your official website?

Akin: We are also really fucking goofy. We love making fun of ourselves and each other. We were told that we have a website now – blackfastmusic.com so I went onto the computer to search it. It loads from the top-down and its slowly loading. Then I see my face on this picture that I haven’t seen before and I just laugh my ass off. It’s like, that’s what I look like on our website, and it’s perfect. So I had to call attention to it.

Dead Rhetoric: The melted candle was a perfect description…

Akin: That’s how I look, yeah! I look like a ghost that has been struck by lightning [laughs].

Dead Rhetoric: You are hitting the road soon with Revocation – is this your first national tour? What are you looking forward to the most?

Akin: Yes it will be. We are looking forward to just doing it. I think maybe I year after I had been living with Ross, he gave me Existence is Futile, and I was like, “holy fuck!” These guys are going to be game-changers. Here we are 4-5 years later – I’m really looking forward to the opportunity to meet those dudes. Humble is a cute word to use in this scenario, based on what I’ve said about how we started. In the back of our heads when we started, we believed in what we were doing musically. But getting out there and doing something on the scale of a North American month long tour with the bands we are doing it with, it was kind of in the back of my head but it wasn’t something I fully thought would ever happen. We can’t wait – it’s a really big deal to us.

Akin: Honestly just hoping to get to album two. Just taking it one thing at a time. That means playing our asses off for this record. I just hope that the next year or so that we have the fortune of getting on as many tours as we physically can – until we start losing wind. We hope to have the opportunity of a good audience reach and make some good connections with fans and people. Then make album two and keep going. We are at a spot right now where we always just hoped it would come to and it’s starting to shape up, so we don’t want to miss any of it.