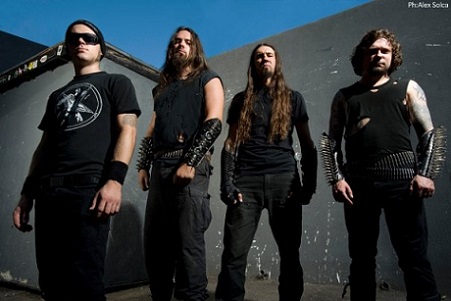 Dead Rhetoric: How has the band evolved, so to speak, since first founding in 1997?

Falgoust: It’s been like a natural progression. When we started, when I got a band with Sammy [Pierre Duet] and Zack [Nolan], who played drums then, it was a lot of, of course, Celtic Frost worship. We worshiped Celtic Frost, we still do. You know, Celtic Frost, Venom, Bathory, that’s what we were into. We listened to a lot of the newer black metal like Emperor and things like that, but we were really die-hard into the earlier classical worship. That was just a big thing, and you heard it in earlier releases. You’d be like, “oh that’s just total Celtic Frost rip-off.” And I think, as time progressed, we’ve evolved into who we are. We kinda grew up a little bit, we started to focus on our own ideas and things like that, and everything’s moved forward like that. So, I think it’s basically like a natural evolution. I’m not the kind of person to look back at my past albums and think, “Ohhh it was horrible!” or anything, I think it was all part of the growth process. I was younger then and evolving – evolving, getting ideas, getting better at what I do. Getting ideas and writing lyrics, laying out lyrics, stuff like that. So, everything evolves in that sense. I never disrespect any of the older stuff we did. It’s all got some kind of part in the way we’ve done everything through the whole career and life of Goatwhore.

Dead Rhetoric: Can we expect to hear more of Goatwhore’s same awesomeness?

Falgoust: Yeah, you know, I think it’s definitely part of the natural progression and we’ve got some different little elements there. I mean, we’re always going back to the classical style of metal. You know, we listen to Priest, we listen to Accept, things like that. I think going back to those sometimes, well, being a little older and having listened to that, but then you listen to some of the newer things that come out, you kind of lose some of the older stuff because you’re trying to keep up with the times. And at one point, you stop and drop everything and you go back to the older stuff… It’s cool because we go back to things. I remember one time we did a tour with Exodus, and after doing a tour, we kind of jumped back into old Exodus stuff and you started to hear it within our writing. We do a bit of death metal, thrash, black metal, because we’re all really influenced by so many variations of it. It might be a bad thing, but we can’t just lock ourselves into one solid form of extreme metal, we kinda put a few little pieces here and there and try to make it work for the best.

Dead Rhetoric: You guys definitely have a lot of different variations and different styles in your metal. Is there any way you could describe Goatwhore’s overall sound?

Falgoust: Yeah, when we talk about it, we just say we’re a metal band. When you say “metal,” there are so many little roots that come off it and there are so many variations. It’s funny when you go to a show, like past Metal Alliance tours, there’s been ones with Devildriver, Three Inches of Blood, you know, this band, this band, and this band, and they were all kind of variations, you know? Where on this one – there’s Behemoth, 1349, Goatwhore, which kinda share qualities that are similar, but we’re also different in our own aspects as well. Where on past ones, every band was really different in their own aspects of how they presented their metal. But it’s funny when you go to a show like that and you see how there’s separate people that are like that too, there’s these people that like this style, these people that like that style, and they’ll come to see that one style band and then they’ll either leave or whatever.

And to me, it’s just all metal. I don’t really see a variation, that’s the way I grew up. I grew up listening to metal and hardcore and punk and everything and I’ve always grouped it all together. And I’m like, yeah well this is what I listen to and this is basically it. I mean, I understand because once I was a younger person and I did have the blinds on. I got to a point to where I was a death metal freak and I wouldn’t listen to anything else outside of death metal. Then I got into black metal and I wouldn’t listen to anything but black metal. And then later on, I was like, wow you just lock yourself into a grid where you don’t get to see what else was going on and appreciate other versions of metal that were going on anymore. I mean, there’s things that I hate, trust me. Everybody has a thing they hate with it. It’s a natural fucking thing. Everybody can’t like the same thing because then it wouldn’t be fun no more, it wouldn’t be exciting, it would all be the same run-in-the-mill bullshit. The variation there makes it so much different so everything can be different. I mean, that’s what the underground scene is, is to be different and cutting-edge and ahead of everything that is “popular.”

Dead Rhetoric: So, often there is something unexpected that goes wrong in the studio. While recording, did anything wrong or exciting happen?

Falgoust: I wouldn’t say as exciting, but yeah, there’s always something that goes wrong. Every record we have some little weird thing. On one record, Sammy had a bad problem with the guitar and we had problems getting some tones, so the guitar he brought in we had some issues with and we had to use a different guitar. There was one time when had some issue with the bass. And on this last record, we did everything to two-inch tape. We had a small little problem with that, but we sorted it out real quick. And also, when Sammy was tracking guitars, we had an issue where we were a couple of songs in and it was sounding weird and the mic went out, it was a ribbon mic or something like that, and it blew out. But luckily, it did it so soon in the recording that we were able to get a new one shipped overnight and start again, but it sounded different when we got a brand new one.

So, I mean, it’s not anything crazy or anything like that, but you have these issues in there that pop out and you gotta go back and try to sort it out. So, we’re doing it on tape, it wasn’t like doing it in pro-tools where you could just, oh shit, we gotta go through the tape and do everything like this again, which was great. I think doing it to two-inch tape was amazing. It wasn’t like we were trying to be “old-school,” it’s just the sound of tape. I don’t think the digital recording world has caught up to the warm sound that tape brings you, they haven’t mastered the idea to capture that. And that’s what we wanted, we really just wanted that whole sound and that whole tone to come across… And we have good times and stuff like that, too. We do silly shit when we’re in the studio. We take a day off because one night everything goes good and we decide to all go out and drink, and the next day is just kinda alright, you know?… Yeah, you have little disasters that happen, but you just sort through them and hope for the best! And actually, everything worked out really great.

The second part of Bridget’s interview with Falgoust will post Tuesday, April 15th.