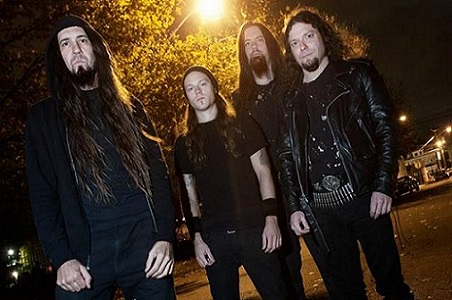 Dead Rhetoric caught up with extreme metal vocalist Ben Falgoust of Goatwhore at the Metal Alliance show in San Francisco, California! Without a doubt, Falgoust is one of the most intuitive and knowledgeable wise guys in the US metal scene. Once his thought-train is rolling, there’s no stopping it. Falgoust, with his crafty mind, answered nearly half of my questions before I could even ask them! He is indeed, a fascinating conversationalist and a deep thinker with unlimited open-mindedness.

Falgoust didn’t just have some incredible and intriguing things to say about Goatwhore, he also had some kind words for all the bands he’s sharing the stage with on 2014’s Metal Alliance Tour, speaking of which, has perhaps the grandest Metal Alliance line-up yet with Goatwhore, Black Crown Initiate, Inquisition, 1349, and Behemoth. Falgoust discusses his past, the band’s past, the new album, and more. He opens up about his ideas on religion, freedom, and of course, metal. With complete confidence, I can say that virtually everything Falgoust had to say is worth reading for any and all metallers and metal inquirers. So, read on and enjoy the tour through Falgoust’s brain.

Dead Rhetoric: So tonight will be the third show of the Metal Alliance Tour and the fifth show of the Goatwhore and Black Crown Initiate tour, not to mention your fifth night in a row. How has the tour been so far?

Ben Falgoust: I think it’s been great, it’s been really good. We did a few shows out to the first Metal Alliance show in Arizona. We played a show in San Antonio, Texas and Al Paso, Texas. The guys in Black Crown Initiate played those shows as well, and those were really good shows. The last two nights have been sold out for Metal Alliance and they said this one is really close to be sold out here in Frisco tonight. It’s been really intense, you know? I mean, Metal Alliance has been doing this now for like four years.

The thing about the metal scene in America is that they try to mix a lot of things, and this Metal Alliance tour is more a lot of the same kind of main bands. I mean, we all share our own different qualities and everything, but we are all kind of similar to each other in a certain sort of sense. The crowd that’s going to come and see is pretty much everyone that would come see us individually, per say. Everything’s been great, everybody gets along well. We’ve toured with 1349 in the past, we’ve toured with Behemoth in the past. So it’s like, when you go back out with somebody, everything just moves smooth, it’s not like this whole new beginning or anything like that. The first day was really smooth, and once you know the first day is smooth, everything after that is going to be great.

Dead Rhetoric: You know, I don’t think they will, San Francisco –

Falgoust: Yeah! San Francisco has always been pretty fucking crazy. But, you know, the last two shows were really, really fucking good, I was really surprised.

Dead Rhetoric: Sort of going back to the first question, and you pretty much answered half of this one, how do you feel about sharing the stage with Black Crown Initiate, Inquisition, 1349, and Behemoth?

Falgoust: I think it’s great. All the bands bring, like I said, a little something different. They’re all really great people – like behind the scenes, when nobody else really sees who they are, they’re all really great people. We did Australia with Behemoth before, we’ve toured with 1349 before. This is our first time touring with Inquisition, but we’ve seen them before on tour and they’re fuckin’ great guys as well. And with Black Crown Initiate, I think the guy was telling us that the first show they played with us in San Antonio was like, their sixth live show ever or something like that, so they’re doing really good too. Everybody gets along, everybody’s doing good, and it plays a big role in the whole outcome. If you have any clashes, it starts to make a little tension in everything, which I don’t think happens much, it’s really rare.

Falgoust: I don’t have anything I dislike about performing, I like performing more than anything. I think going into the studio is the thing I dislike more. Going into the studio, there’s something about it, I don’t want to say stagnant because then that makes it sound really bad. But I guess it’s just playing in front of people and the energy that you feed off of each other is what makes the situation. So yeah, I like playing a lot. We’ve done tours on our own and we played in small little places in backwoods towns and there was like 15 people at the show, but it was still good, you know? Because even 15 people can create an energy if they’re excited about it, and it feeds off of each other and just makes the whole situation exciting. So, the performance thing, I mean, that’s what keeps me doing this.

When we’re doing the record, I’m like, alright, once we complete the record, we’ll be able to tour a bunch on it and everything like that, and that’s what kinda gets me through the whole recording cycle. It’s not that I don’t appreciate the recording, it’s just that with the live setting to me, I feel more comfortable in it and I fit into that pocket better. In the studio, even though I’ve done numerous records, I still gotta fit into this little pocket, this little uncomfortable pocket, to kinda complete and finish it. So, you know, it’s different cycles, but I really enjoy performing a lot.

Dead Rhetoric: The band’s lineup has been altered quite a lot over the years. What do you think about the current lineup?

Falgoust: The current lineup, I think, is really strong. This line-up has been together now since before Blood for the Master. It’s been on Blood for the Master, it’s on the new record that’s coming out in July. We get along really well and everything matches. Nowadays you see that with bands and they change people, but things happen in people’s lives and sometimes a member has to move on, whether they have children or some kind of job or some kind of thing, and that becomes more of a pore in the equation of the situation. And I respect that, I completely understand it, sometimes people have to move on. Sometimes the musical interests don’t run the same as everyone else, everyone has to pretty much be on the same page and be kind of cohesive about it and want to do pretty much the same idea. If somebody starts bleeding off too far, then you have a little conflict in there.

I mean, we also talk to older members of the band and everything. Pat [Bruders] we used to play with, he plays in Down now. He went from Goatwhore to Crowbar to Down. We still associate with Pat and we’re all good friends, you know? I mean, there’s nothing wrong with it, it’s just that people at certain points, they end up taking different directions and they want to do different things. And I respect that, I think that’s great he went on to do those things and elevate to get to the point he is. So, you kind of move along and the changes happen and you just flow with the changes. Sometimes they’re tough and you have to have to work through it, and sometimes it takes a while. It’s like gambling in a way, except you don’t really lose money.