Behemoth – Bow To None 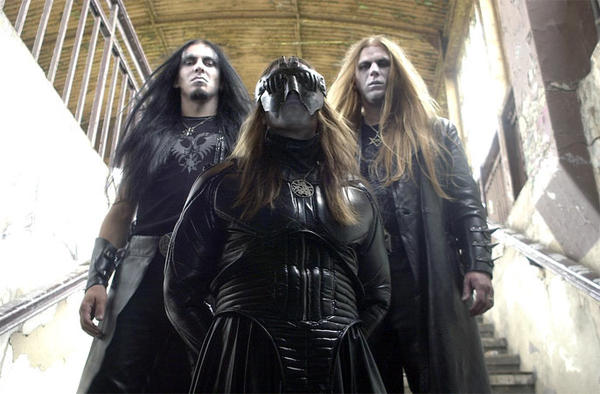 Aren’t Behemoth just everywhere? And no one is complaining, right? For a band that was just a blip on a lot of our radars when the decade arrived, there may be no greater underground success story than this Polish trio. From the startling maturity of 2003’s Zos Kia Cultus to the unwavering discipline and punishment of 2004’s Demigod and ‘07’s The Apostasy, the rise of Behemoth is no coincidence – they’ve fucking earned it. They tour until the wheels fall off, record an album, and are back out again. Such a pace would killer a much lesser band, methinks.

Evangelion is their latest and perhaps greatest offering and as mainman Adam “Nergal” Durski would go on to tell Blistering, it’s their most focused, with the extraneous elements extracted, the extremity heightened and grandiose reeking of even greater grandiosity. It’s a complex beast, this Behemoth. In the throes of the sweltering heat during this summer’s Rockstar Energy Drink Mayhem Festival, we caught up with Nergal, runny corpsepaint and all…

Blistering.com: The new album is just coming out, so how do you feel the new songs translate live and are you worried about the crowd being unfamiliar with them?

Nergal: It’s been awesome…great promotion for the new album and to get the new songs out to people. I have really high hopes for this record. People are getting into the new songs and the album is not even out yet.

Blistering.com: In terms of playing outdoors, in the sunlight and heat, do you think this is the right atmosphere in which to see Behemoth?

Nergal: We’re in Virginia Beach today and it’s fucking humid and hot like you wouldn’t believe. We have to go on in three hours in full armor and full gear in the middle of the day. We’re missing some of the mystique of our club show, so I would say the club environment is definitely more suitable. Still, I think the outdoors…we know how to do it. It makes sense.

Blistering.com: What consideration was given to the set list when you have a handful of albums and only 30 minutes?

Nergal: We choose the songs from the albums that had the biggest impact over in the US, so it was easy to choose from the last few records. We have play “Chant for Ezkaton 2000,” there is no Behemoth show without that song. Of course, we have 100 tracks, but people want to see the classics. Usually when we have our own tour, we try to come up with stuff that [isn’t] as played. But we want to play songs that people are aware of.

Blistering.com: With The Apostasy, you spoke as to how you pushed yourself to the brink during the recording process. Did the same thing happen here?

Nergal: We take no prisoners [laughs]. We try to make every song on the album the best we can. Of course, there’s sacrifice, but for some reason, this one worked out great. I’d say this was the most effortless record to make. It was cool, we kinda changed the formula. We changed sound engineers, so we didn’t have one guy for three months, which helped kind things open on both sides.

Nergal: It wasn’t like the The Apostasy, which is a very complex record. That one was diverse, but it went in way too many directions and it lacked the focus. Now I have perspective; two years have passed and I can see it. I can already see that this will be our most diverse album. Each song stands on it…each song stands out, very special, exclusive, but at the same time, the way its put together makes the album very compact. It just flows. I’ll give you an example: The Apostasy was 39 minutes long and every time I’d listen to it, I think it lasted for 50 minutes. The new one is 42 minutes, but it feels like 35 or something. It flows, it flies and when you’re done, you’re ready for more. I just wanted to make an intelligent record.

Blistering.com: And the album feels simpler in some respects, not like you’re trying to dumb things down.

Nergal: That’s interesting. You have song like “Daimonos” which is complex…there is so much going on. Or “Shemhamforash” which has a lot going on. Then on the other hand, you have “Lucifer” which is pretty much primitive, primal, barbaric kind of track with this Celtic Frost vibe to it. There was nothing that we did deliberately. The record virtually came off our systems. With the The Apostasy and even Demigod, I’d play the songs and feel like they weren’t good enough…not technical enough. This time, we just said “we are who are” and said “we are Behemoth, we don’t give a fuck.” We’re not playing around with this music. It feels natural to us, very varied.

Blistering.com: [Drummer] Inferno turned in another stellar performance. What does he bring to the table?

Nergal: Thomas [Inferno] said a very smart thing a while ago that “there’s no such thing as a bad band, just bad drummers.” [laughs]. He’s a fucking character. We’re on this tour with amazing drummers and there’s some standout drummers here and in this genre like Dave Lombardo, Nick Barker, and so on. But Inferno’s a character, a fucking “inferno.” I really see Inferno as an icon. An icon of extreme metal music and there are drummers that more technical than him. It’s him who I see behind my back when I’m stage. I don’t want to see anyone else.

Blistering.com: How has the label switch worked out thus far?

Nergal: Century Media was good for a while, but they didn’t do shit for The Apostasy and I’m not talking about the people in the promo department, the so-called “small” people, the staff people – they’re amazing people and I’m still friends with all of them. But the bosses of the company changed their policies. They started cutting the budgets and doing all of this crazy shit. This isn’t a game to us, so we told them to fuck off.

We ran into the boss of Metal Blade [Brian Slagel] in England or somewhere and he came up to us, told us how much he was into the band and we saw his passion and dedication. We decided to give it shot. He’s an awesome guy and he’s been out on the tour a couple of times which proves to us that he’s going to be the kind of boss that’s always going to be with the band. I’m grateful. They were definitely the right choice.

Blistering.com: You started the decade as this cult band with the Satanica and Thelema 6 albums and now you’re one of the more high-profile bands in the underground. Ever take any stock in this?

Nergal: We’ve been working hard. We’re hard workers. That’s all I see and that’s all we’ve ever done, just now we get things done in a more spectacular way [laughs]. I definitely consider us to have paid the consequences…we’ve endured more than the average band could take. There’s a lot of determination and that’s key word as to why Behemoth is getting so big in such a short period of time.