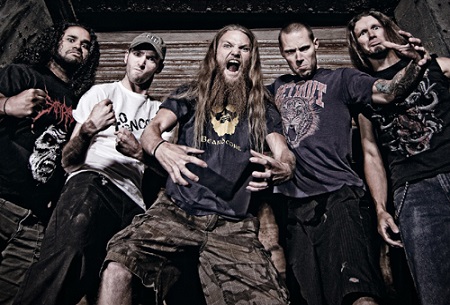 In this day and age of modern technology, the number of bands plying for fan attention is mammoth. Back in my early teens, we depended on any print magazine we could find or a specialty radio show that played maybe at midnight on a weekend for that one-two hours of metal music. You would comb the record stores looking for names that sounded cool, covers that captured your eyes and possibly raided the music collections of your friends. The youth of today do not realize how instantly accessible anything they want is with a few keystrokes and a computer/tablet/ cell phone device.

So it’s nice to hear that younger acts like Michigan’s Battlecross still believe in the label model to advance their career aspirations. The debut album Pursuit of Honor fuses the old with the new when it comes to thrash and modern metal. You can hear aggression but also slip into some fine musicianship-laden passages and the ability of writing songs- not merely musicians slapping together four or five riffs and hoping the listeners will retain all the parts that whiz by their ears.

In between his day job at Quicken Loans and just before settling into band practice, guitarist Hiran Deraniyagala called me from his Michigan stomping grounds, where we proceed to have a pleasurable chat about all that’s been going on with Battlecross.

Blistering.com: Pursuit of Honor is the debut album for Battlecross. What are your thoughts about the record, your performance and what types of difference Kyle Gunther (vocalist) and Don Slater (bass) made to these songs, because a lot of this material was written before they came into the band.

Hiran Deraniyagala: I think Kyle stepped it up a notch. A lot of this material was written with our old singer, I think Kyle was just kind of the missing piece to our puzzle when we got him in to do vocals. He just adds different dynamics than our original singer and we needed, the music has different dynamics to it and the vocals added to that, so I was very pleased with what he did on the record.

Blistering.com: How does it feel to be signed to such a long-running label like Metal Blade? You seem to be getting solid promotion and support from not just the North American side of things but also the European division…

Deraniyagala: It’s great, man. It’s what we’ve always wanted; we’ve worked so hard to get to this point and be at a label like Metal Blade that’s so well-known and such a good label for the metal scene. Especially to get recognition outside of the United States is even better. We’re just hoping this will open more doors for us to be able to tour and play everywhere and anywhere we can.

Blistering.com: You shot a video for the title track on the grounds of the Yankee Air Museum. Tell us about the concept behind the shoot and how do you feel about this promotion vehicle in this day and age?

Deraniyagala: The video concept came together by the director Rory Warner. When he approached us about the video, we shot around some ideas and our manager suggested we use the Yankee Air Museum, which has that World War II setting. The theme of the band itself has that same feel of battling and war, it just worked out really well for us. It fit with the song itself because that’s about persevering, pushing and battling through. That’s what a solider would do in a war: push, pull and destroy against all odds you have to fight through it. It was something that was a little unique and different because a lot of bands sometimes do the same thing playing on a stage, a live feeling and that can be cool but sometimes seems so overdone. As far as the video market, we know that MTV isn’t playing videos, but they can help you with social media. Having a music video out there is another way that can help you get noticed. People will catch onto it – we are visual people, and we’ve had 13,000 hits on it so far. The more ammo you have behind you to promote yourself the better.

Blistering.com: For me, “Breaking You” just has a series of crushing riffs and rhythms that epitomizes what Battlecross represents. Can you tell us more about this song and what some of your favorites are on the record?

Deraniyagala: “Breaking You” was actually one of the first original songs that we wrote, it’s got such a balls-out feel to it. A lot of the riffs were taken from previous older material that we constructed that was better. It’s a straightforward song with an aggressive feel to it. Some of my favorite songs on the album would be the title track, “Man Of Stone,” and “Misery”. “Misery” in particular because I have a lot of fun playing that song live.

Blistering.com: How does the songwriting dynamic work within the band- do individuals come to the table with full songs complete or do you guys collaborate and refine work as it goes along?

Deraniyagala: It’s kind of half and half. Sometimes one person comes in with a riff idea and we all collaborate on that, or sometimes we have a whole song with a skeleton lay out, but in the end we do have one or two people collaborating. We are not a band that just gets together, jams and out comes a song – we like to have someone coming up with an idea ahead of time so we aren’t beating our heads against the wall.

Blistering.com: Being from Michigan, do you think the blue-collar work ethic plus the challenging economic times plays any role in fueling the aggressive side of Battlecross’ music?

Deraniyagala: I think inadvertently it does. We are all from here, and people we know have experienced the hardships that have been going on. Our mindset has always been to be hard working and to never give up. We want this so bad and we love what we do, and we’ve been through a lot with losing members, and some people might just give up but we know what we want and we know what we want to do. Our mentality alone has influenced us to be hard working – we relate to the other people in this city who are like that.