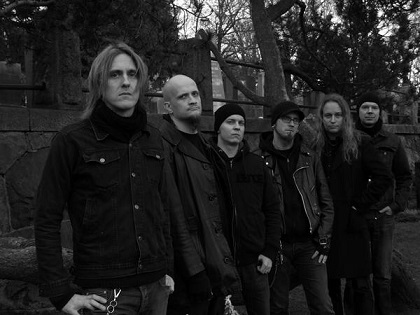 Blistering.com: To your credit, Barren Earth isn’t trying to play old-school death metal, rather old-school melodic Finnish metal. Does everyone in the band hold that era in high regard?

Perttilä: Absolutely, although I have to say that wasn’t necessarily something we set out to sound like. It just seems to come out that way. It’s been said that writing Finnish sounding music is easy: just be born Finnish and write music. Maybe Finnish death metal is the same? Finns do seem to share that certain rather melancholic, Slavic sense of melody. It’s present even in the children’s lullabies here, so you get immersed in that influence in a very early age! And of course it has to be noted that Oppu and Kasper have somewhat distinct writing styles, which were part of creating that sound in the early-to-mid-90s.

Blistering.com: There are obvious classics from that era (Tales from the Thousand Lakes, Amok, etc.), but give me a few unheralded albums that people may not be aware of.

Perttilä: Hmm, that’s a good question. There were a lot of death metal bands in Finland at the time, but barely a handful of them ever made it to record albums. Xysma is one of the few who did enjoy a recording career, and soon ventured out of death metal to explore other avenues of tasty music. Check them out if you can find any of their stuff!

Blistering.com: As for Curse of the Red River, it feels much more developed than Our Twilight. Were certain songs saved just for the LP?

Perttilä: In addition for the title track, “Jewel” is the only song on the EP that was recorded in the album sessions. The other two songs on the EP were actually from our first demo we recorded in 2008. The idea of putting out an EP didn’t appear until after we had completed the recordings for the LP, so we never actually recorded anything with specifically the EP release in mind.

Blistering.com: Of the highlights from the album, I’d say “Flicker” is the best of the bunch. Give me some background on this song, if you can.

Perttilä: Thank you! I’m really proud of how it turned out. It started out as a melody I had in my head when I woke up one morning, the verse vocal melody in fact. I then came up with a chorus, and the rest of the song came together quite quickly after that, it almost wrote itself! We had a few arrangement ideas for the light part before the final chorus, actually had a bit of trouble deciding on what kind of approach to use. Arranging that was a good collaborative effort. I even played a kind of Greek bouzouki sounding thing in there, we thought it sounded outrageous in a good way. Lyrically the song deals with experiencing a border between sanity and insanity, a realization of reality and imagination mixing.

Blistering.com: The progressive metal influence is definitely prominent. Do you think that will help keep Barren Earth sounding fresh? It would have been very easy for you guys to just copy straight melodic death metal. Surely everyone would have been happy with that…

Perttilä: Ah, we certainly would not have been. We want to keep exploring where we can take the music, and to boldly go well, somewhere. As a welcome by-product, I’m sure it will keep the music sounding fresh too. You can think that there’s a certain ratio of “progressive” and “death metal” on the album, and that ratio will probably be a bit different on the next one. But it might just as well go either way. We’re very ambitious with the music, but we certainly have our feet on the ground.

Perttilä: We tried to think of an outside ear who would “get” easily what we’re aiming for musically and sound-wise. I think Oppu brought up his name, and we just sent him an email, simple as that! It was a perfect match, he really dug the music and we loved the way he made the record sound. Plus he’s a super nice guy to work with.

Blistering.com: Finally, what’s on tap for the rest of 2010?

Perttilä: We’ll be trying to do as much shows as we can, and keep on writing new music. The album release happened so late we kind of missed the Euro festivals in the summer because they were already booked full, but we’re doing a few. We’re also looking for a support slot in a good tour in the continental Europe later in the year. I’m actually writing this from Omaha, Nebraska on an US tour with Moonsorrow and Swallow the Sun, half of Barren Earth is here. When we get back home in May we have BE’s first tour in Finland lined up. And also we have a nice bunch of new material to work on.