Avatar – Hell Is Where the Heart Is 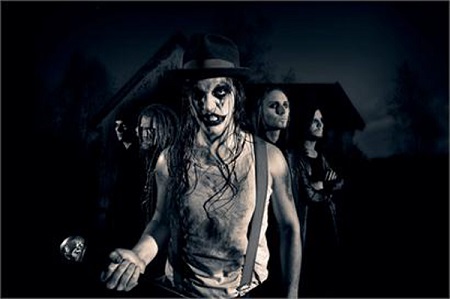 Throw the word “Gothenburg” in front of anything in metal and instantly, visions of melodic death grandeur come alive. There’s enough back story and evidence to suggest that the pull of stickly-sweet melodies is too hard to resist, and toeing company line is a foregone conclusion for most bands. Not for Avatar, though. The Gothenburg-based metallers found their bearings in the melodic death metal scene roughly a decade ago, but have mutated into an America-ready industrial/death metal hybrid that leaps over proper description on their new The Black Waltz (eOne). Don’t let the circus clown/Marilyn Manson cover fool you – Avatar’s melodic DM-rich background conjoins with pulsating rhythms for an ugly, yet infectious outing, highlighted by the insanely catchy “In Napalm,” harmonious title track, and hard-driving “Let It Burn.”

Frontman Johannes Eckerström phoned Blistering to rap about all of the above and more, making a concerted effort to convey that Avatar are primed and ready for the North American market. And who are we to argue with a man who has the appearance of a sadistic carny?

Blistering.com: The band has been kicking around in Swedish and European territories for quite some time, but The Black Waltz is your first album to receive proper North American release. Describe to me how that feels.

Johannes Eckerström: The feeling is, “Finally!” The other side of it is that it’s really cool that certain people tell us we’re young in Europe with four albums, but I’ve been in this band for 10 years. So we’re slowly turning into veterans over here, but on the other hand, we go to America and be the new kids in the neighborhood. It’s a really cool combination of both.

Blistering.com: One of the interesting aspects of the band is that you sound American and Swedish at the same time, yet you don’t sound like a traditional melodic death metal band. There’s definitely a noticeable American influence in your sound.

Eckerström: I don’t think we’ve ever thought in terms of what’s “European” or what’s “American,” but there are some American bands that are in the mixture that is Avatar. It’s nothing outspoken like that…that we’re more American or European, but I guess… [trails off]. I don’t know, it’s a good question! I can’t think of any American bands that sound like us, though.

Blistering.com: Some of the comments I’ve read regarding the album and the cover fall in line with Avatar being like Marilyn Manson or Nine Inch Nails, but you don’t sound like either of them at all. You’re kind of an odd-ball in a sense.

Eckerström: You mentioned one of my favorite bands, Nine Inch Nails. They’re inspiring in one [way], but mainly the inspiration from that world is for us to pull something out of the chest that has our core sound, that’s artistic and complete. It’s something that’s original to me, simply

because at the end of the day, I want to be able to tour and do albums and pay people, while getting some decent pay for it [laughs]. But only on the terms I feel I’m entitled for and we create something that’s relevant. In that sense, it would be bullshit on our side if we went “Oh, that band is successful, let’s jump on that bandwagon, let’s follow that trend.” Or, “I liked that band growing up, let’s sound like them.” None of those two paths make much sense to me. If my ambition was to sound like any other band, I would play in a tribute band.

Eckerström: The thing is, we have our roots in that style of music. That’s where we started off when we were 15 or 16 years old. We are the generation of little brothers to the dudes that produced that style of music in the past. That also happened to be the common ground we found in each other in the beginning, like, all the things I and the drummer and guitar players could agree on, was technical death metal and melodic death metal. During those first years, because of that, people compared us to the Gothenburg scene. We didn’t sound like any specific band back then, but we were a part of the style, part of that generation. The thing is, when we stopped that and started to find our own path in music, I’m way more comfortable today talking about Dark Tranquillity or At the Gates because yeah, they’re awesome, but we do our thing. They’re around doing the thing they were doing back then, but I don’t see it as our job to be part of that. I mean, they’re already doing that and doing it really well, so it’s our job to find out what goes on in our own heads.

Blistering.com: How hard was it to find against that tide? It probably would have been really easy to make a career out of being a straight melodic death metal band.

Eckerström: [pauses] In the beginning, we didn’t try to fight it. I guess we were thinking like those guys were thinking when they started, like, “Melodic metal has many shapes and is awesome and brutal music is awesome, so let’s find ways to combine it.” I guess we lived that era that they had, but 15 years later. So in the beginning, we didn’t fight [it]. Then we started to get a more healthy view of what we wanted to do; that originality become more important. There are no musicians or artists that have re-invented the wheel, only because everyone has heard everything before.

Blistering.com: You mentioned the rock ‘n’ roll aspect of the band, and “In Napalm,” I think is a perfect example of that. The opening riff gets stuck in my head all the time.

Eckerström: With this album, every song has a very unique story. They have their own specific paths and with that song, it was one of the few ones, pretty much all the music was written as one piece before there were any lyrics and vocals to it. Usually, one of the guys shows up with a riff, and then we try something on it like a chorus and move it around. That song was formatted when we were younger. Jonas [Jarlsby], one of the guitarists wrote it very linear. Immediately, it sounded awesome. It was an intense, very fast

riff, but filled with harmony, that had this rock ‘n’ roll western-type of feeling. That was nailed immediately, but then it took a while to figure out my job on the song. We took this long, long detour…we threw away some parts and put some back in, trying to figure out where the chorus should go. And we threw away, and started to work with it again and three months later, the song was exactlythe same when we first wrote it. The detour was worth it, because that’s where I found the lyrics and vocals.

Blistering.com: At least in terms of your performance, I’ll point to the title track (“The Black Waltz”) as being perhaps your best on the album.

Eckerström: That song is fun because it’s been around for five years. Most of it is exactly as it seemed like it was in the beginning, but there was this little thing that makes sense. There’s always this little detail that makes everything fall into place. We tried it for our two albums, but then we got that last touch of “awesome” [laughs]. We were almost finished and had enough songs for real and to be able to go into record. But then, one thing lead to another and I was humming this melody to the guys like, “You remember that ‘Waltz’ song from way back when?” They were thinking the same: “We should try that ‘Waltz’ thing!” We were all thinking about this song, so we picked it up, and exchanged some chords and I re-wrote the lyrics and it was done [laughs]. It was magical. In a way, it’s pretty clear that this evident that this album is a huge change compared to where we were on the last album or the two before that. At the same time, we can take a five year-old song and it fits perfectly.

Blistering.com: Before talking to you today, I visited your website and the “Themes” portion of it. How do you go about choosing a topic to discuss?

Eckerström: Instead of having a normal news feed and having a blog

here and there, we wanted to put it all into one. We would post news, but use this blog for news and try to connect it to all others like Facebook and other home pages. So we take the news, but if anyone has something cool to share, go crazy, do it. It was a spontaneous thing. Schindler’s List was on the TV and that totally got me thinking about the things I was thinking when writing the album. So I actually had something to talk about; a whole story to tell about the album concept-wise. We didn’t do a concept album, so it was my spontaneous way of explaining the lyrics without giving away too much.

Eckerström: For the rest of the Spring, we’re working with a booking agency TKO, and Live Nation over here. We’re busting our asses to make things happen. There’s still nothing put in stone, except some cool festivals in Sweden. I won’t be a guy who gives away too much, but we’re negotiating and America is happening. There’s some deals hanging in the air that we’re working to get through. It’s not official, yet [laughs].

Blistering.com: I think you would appeal really well in America.

Eckerström: I’ve spent one week in Austin, Texas. I only know about American bands that Europeans like [laughs]. I guess we’ll see what happens. We have a cool booking agent and management, and we totally believe in what we’re doing. We’ve done so many interviews for this album, much more than any other Avatar release, even in American markets. The whole set-up is there, so hopefully there are some people in some offices who think they can make some money off of us [laughs]. It’s a good thing to me.