Author D.X. Ferris Chronicles the Enigma That is Slayer 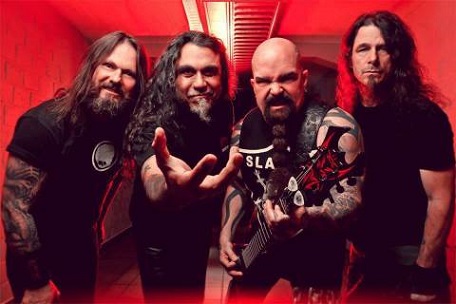 Ferris: Tom has contributed his share to the band, no doubt. But in some regards, he’s a passive member. It takes a lot to rile him up. And Lombardo eventually pushed Araya to the point that Araya didn’t appreciate the guy’s presence any more. So I can’t tell you exactly what the dynamics of the Bostaph-Araya relationship are, but I can make an educated guess about what they’re not: And they don’t aggravate Tom. And that’s good enough for him.

Dead Rhetoric: So Hanneman’s passing finally cast a light upon his songwriting contributions. In your estimation, did he ever stew about not getting the credit he deserved?

Ferris: I think Hanneman got more attention than he wanted. If he wanted more credit, he could have done more interviews and stepped back into the spotlight with Kerry King. But he didn’t. He hated interviews, and he didn’t care for the attention. People know who he is, and he is beloved. God forbid, when Kerry passes, I don’t think people will get as sad as they did for Jeff. Jeff was just a regular guy doing his thing, who spent time in the spotlight increasingly reluctantly. Kerry gets some shit as the leader of the band, but because Jeff was all about the art, he’s perceived as a pure soul. And that seems correct.

Dead Rhetoric: Do you feel that because Hanneman was so prolific in terms of songwriting, that King developed a bit of a complex?

Ferris: We know Kerry King is a competitive guy, so on some level… I mean, he doesn’t care about Grammys, and he doesn’t do it for acclaim. But then songs by Jeff and Tom win Grammys. And in the 21st century, King has done more than anybody else to keep the band going. And he has written more songs. So it’s frustrating for him, I’ve been told. I don’t think he holds that against Jeff or Tom. But I think it drives him to keep going in the direction he’s going. Like, “Fuck you all, I’m gonna do things my way, period.”

It seems similar to how the long shadow of Rick Rubin irks King: It’s been a long, long time since Rubin was very hands-on with the band. And people like us are still asking about him whenever we get the chance. I mean, look at the Beastie Boys: They made one record with Rubin, and they ran away, screaming, trying to establish themselves as independent, credible artists who didn’t need Rubin’s help. Slayer made their most acclaimed albums with Rubin. And he still has his name on the records, regardless of how much he did to shape the recent albums. And they benefit from the association.

Look: Metallica hired Rubin. So they appreciate Rubin’s presence, and at the same time, it makes them chafe. Maybe that’s all coming to a head now, with this situation between the band and the American label. Depending who you talk to, it’s either a divorce, a negotiation, or typical Slayer dysfunction communication. And I don’t mean “dysfunctional” in a judgmental way; that’s how they work, and it works for them.

Dead Rhetoric: Realistically, was there ever a real shot of Jeff making a full return to the band? Or is Holt too entrenched?

Ferris: As Kerry said, the gig was Jeff’s whenever he wanted it. The band are still ambivalent about Holt’s presence, and they won’t let him write for this album, so I think it’s a net negative in their eyes — though I think it’s 100% positive. But Hanneman didn’t want to do the rehab, and he didn’t do key things that would have helped him get healthy. I mean, in 2010, he did not look healthy. And in his final appearance in 2011, he looked pretty beat up. I’d be curious to see what he looked like at the end.

Me, I wish Holt were more entrenched. I wish the band would do what Metallica did with Newsted: warm up by recording a covers album or EP. Then let him write. As I note in the book, Holt’s writing is part of every Exodus song, and Exodus fans tend to like that band’s new material more than Slayer fans like new Slayer songs.

Dead Rhetoric: The band’s next album…their most important, since, ever?

Ferris: Yeah, definitely. It tells us, for now, if Slayer are a relevant, credible ongoing force in the musical world. Or if they’re just a legacy band like so many others, and the new records are a formality to keep them on tour.

On paper, it’s a golden opportunity to let bygones be bygones, put the past in the past, and rally the team for a win. They have Rick frickin’ Rubin on the team. Or they did. Let him come back in and help bang the songs into shape. But Slayer have an album full of songs, or close to it. And they aren’t the type to go back and work on songs more. When they have 10 songs they’re happy with, the album is done, and that’s what they go with. So it remains to be seen whether it’s more important for the band to reassert their independence — or to maybe have King put his ego in check, let go of old issues, and let some outside help affect the art.

Dead Rhetoric: A bit of a general question: When wrapping the book, what were your main takeaways? Do you have a different perspective on Slayer now?

Ferris: I do have a different perspective. I still worship the band, but I think I understand the players from a human perspective better.

I was surprised how little money motivates the band. I knew they never chased commercial success. But then they could have toured a lot more over the years, and they didn’t. I was shocked how short the South of Heaven tour was, for example. They routinely checked out for a full year at a time. And say what you will about their merchandising, but they haven’t done the most obvious things they could have done to wring out some easy cash. They work hard, and they give 100%, but they do it as little as possible.

Like a lot of people, I think I went into this thinking that King could be a dick. And maybe he can, but you need someone to push the band forward. At the start I was definitely more sympathetic to Lombardo than King; I mean, Slayer playing without Lombardo just seems wrong. And the more I looked into the incredibly complicated Lombardo situation as it unfolded over 30 years, my sympathies shifted.

For more information on Slayer 66 2/3: The Jeff and Dave Years, visit Slayerbio.com