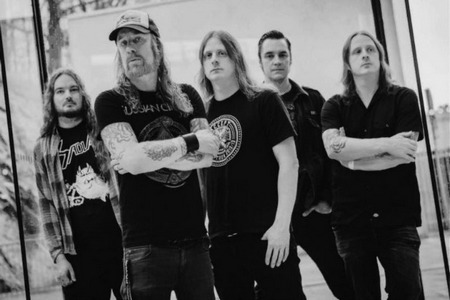 Dead Rhetoric: At War With Reality is based on the concept of “magic realism” and that reality is ever-changing. Could you go into this idea a bit further?

Björler: I’m not super knowledgeable myself, but I know what it is. It was a literary genre that was coined in the 1950s and a literary style to write in a poetic/metaphoric way to avoid censorship. Tomas adapted that literary style to implement [on At War With Reality] so it’s very much on par with Slaughter of the Soul in many ways. The existential form: what is reality and the many forms of reality, and that reality is changing at any time. It’s about perspective and I would say that it’s open to interpretation and at the same time it works for anyone and there’s a lot of cool metal words. It works for everyone and for me personally, it’s very deep, very abstract, and very existentialist approach. It’s not directly about religion or politics, but it could be interpreted that way.

Dead Rhetoric: You said you were meticulous about all the parts of the album earlier, what went into the visual of the cover of the album?

Björler: We were aiming for a very simplistic, stylistic cover, like a symbol. Some kind of symbol and some kind of entrance. When you open up the booklet, it’s like you enter another world. We chose Costin Chioreanu because we like his style, it’s almost cartoonish and very dark. He did some At the Gates merch designs in the past, and he did my solo album as well. It was perfect for what we wanted, those barren landscapes that mess around with reality and persepective. I think it fits the album perfectly.

Dead Rhetoric: How do you balance fan expectations, particularly those looking for a Slaughter of the Soul part II?

Björler: I guess a lot of people seem to be happy [with the new album]. Both the Slaughter of the Soul fans and the older fans. I’m just overwhelmed to hear [the positive feedback], it’s just fantastic. Of course there’s always the 1-2% that is going to hate it in advance almost. If you are open-minded and give it a chance, I’m just happy if people can take the time and really get into it. We’ve worked our asses off for over a year and we are very happy and of course that’s a good starting point. You can never really change what’s trending or the conversations that are going in a forum. It’s impossible to control so we let go of it and concentrate on the positive. And in general, it’s been like 90-95% positive, which is pretty ridiculously positive.

Dead Rhetoric: Do you ever feel that the rest of the At the Gates discography gets overshadowed by Slaughter of the Soul?

Björler: Not really, because I think the old albums are very inaccessible in a way. They are suffering from poor recordings and you have to really allow it to grow on you and take it for 100 listens and not one. It’s more demanding, and in this day and age, with teens growing up, maybe they would prefer something slick and modern instead. It’s easier to get into. The older albums are filled with distractions and even errors, because we were pressed for time. So of course, Slaughter of the Soul is more accessible and the songs are more accessible so I understand it.

Dead Rhetoric: Again looking at the impact of Slaughter of the Soul and the massive number of bands that have tried to copy your sound, are there any bands that you can think of that took a piece of your sound and brought it into any different or new directions that impressed you?

Björler: A lot of bands did, but I don’t have any specific examples. We are also getting blamed for a lot of things that we didn’t really start. I think the whole new wave of American heavy metal bands are much more influenced by what the second generation did, like Soilwork or In Flames. We were always more dark, with darker melodies, and based around classical music, opera, and even folk music. I haven’t heard of a band that sounds like At the Gates. I know it might sound weird to you, but I think it’s so condensed and down to the individual members that make up a band. All of us, all five members are so important for our sound so to speak.

Dead Rhetoric: I can definitely see where you are heading with that…

Björler: I mean we are getting blamed for the metalcore thing. I mean, the combination of In Flames, Soilwork, and Meshuggah, that’s your perfect trio. You have the breakdowns from Meshuggah, and the melodies and clean vocals from Soilwork and In Flames. Much more than At the Gates were, for me it’s much more Slayer-esque, it’s thrashy death metal.

Dead Rhetoric: When you listen to Slaughter of the Soul, it had that mainstream appeal but if you listen to it today, it’s still a pretty visceral and angry record, especially compared to those other bands.

Björler: I think there’s a misconception or trend that it’s supposed to be like that. It’s not the truth, it’s just become an entity somewhat, getting blamed or cited as an influence. Of course I’m very happy to be considered an influence from big journalists like Sam Dunn or big bands like Killswitch Engage, it’s flattering and we are humbled by that. But the comparison is wrong. They may be influenced by certain riffs, but not the whole thing. Killswitch does not sound like At the Gates at all.

Dead Rhetoric: Some time away from the scene brings back a certain freshness to the material. Looking at an alternative reality where At the Gates didn’t break up after Slaughter of the Soul how do you think it would have changed the band?

Björler: We would definitely not be doing successful reunion tours right now. We were really inexperienced and young when we did the tours for Slaughter of the Soul. There was a lot of alcohol involved. There were no fights of course, but we were tired and we didn’t get paid. We’d be paid in beer and out for eight months and after that I was worn out. I wanted to try something else, that’s why I wanted to go back to school and get an education. A few months later, The Haunted appealed to me so I went back to a rehearsal state of a band with no pressure from touring and from labels. We wrote new songs for like three years without anything happening. That was a perfect situation for me then, with no pressure, just being able to create. I’m very impulsive and emotionally-driven with my decisions. I quit The Haunted two times as well. If something doesn’t work out and I’m not feeling comfortable, I don’t quit instantly but if it doesn’t get resolved with time I can’t be a part of it. That goes with regular work as well. I can’t work at a workplace where everyone is an idiot. Not that we had bad relationships in At the Gates at the time, but everyone was frustrated with the situation at the time. Being exposed to that level of alcohol and not so much food. It’s almost a ritual with certain bands nowadays, that it has to be there backstage, having to have beer before going on. It’s so connected to the music scene, and we were very inexperienced.

Dead Rhetoric: When you look at the metal scene now versus back in the 1990s, what do you feel has really changed/stayed the same?

Björler: In some ways, I think it’s gotten bigger. Especially in the US, there’s a growing metal scene again, that’s nice to see. There was a big death metal boom in the early ‘90s but then it kind of died out. It’s constantly changing, and demanding new genres and new bands to take on the road. There’s some experimentation, but not too the extremes I would say. I would want more experimentation and weird styles, because it’s within the metal framework and how its supposed to be conceived. It’s very limiting in a way, when people have expectations of what you can and can’t do. But there are some good examples, and some bands that keep driving the forefront all the time. There’s always a retro-movement as well, sometimes it’s sludge, or old heavy metal, and that moves in circles as well.

Dead Rhetoric: At the Gates will be touring Europe this fall; will you be coming over to tour North America at some point?

Björler: Yes, we will be over in the spring [2015] and it will be announced very shortly.