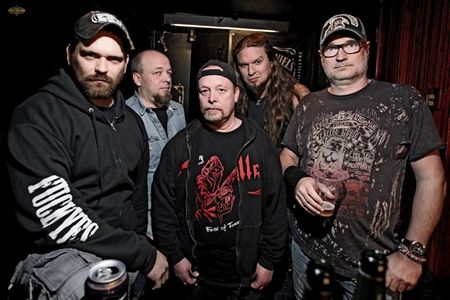 Dead Rhetoric: Having your brother as a fellow guitarist in the band, is it easier to split the workload and understand where each person is coming from musically?

Stützer: Yes, basically you can name 20 bands and we all like the same things about those bands. As brothers we play what we want, he knows my tendencies and I know his. We can compare very well, especially in the writing process.

Dead Rhetoric: Would you say the skull-adorned reaper is sort of Artillery’s Eddie in terms of a band mascot? What do you think of the latest cover art?

Stützer: Yes, it’s turned out to be our mascot. Only two albums By Inheritance and Legions we didn’t have the reaper. I think it’s going to be our mascot so I think we have to find a name for it. The new album, it’s very much like the older Artillery albums. The guy who did the art work was German, and I just said to him to do a cover with the first things that come to your mind about Artillery. So that was what he came up with, and people have been very positive about the cover so I think we have done the right thing.

Dead Rhetoric: The quality of acts from Denmark in metal seems quite high to me – are there distinctions that you notice that separate you from other European bands either in outlook, songwriting, or performances?

Stützer: In Europe there are some really strong scenes- for example in Germany. Many of the bands in Germany for example sound more like each other. In Denmark because it’s a small country maybe bands are more original- you have bands like Mercyful Fate, D.A.D., Pretty Maids, and Artillery. That’s four really different bands. I think that’s a good thing to be from a little country if you make music, but not if you want to be in the right marketplace. It would be better success-wise for us to be in the German scene or American scene, we would see a lot more success. Writing wise it’s a good thing to be Danish.

Dead Rhetoric: You’ve incorporated many Middle Eastern influences amidst your thrash sound since the late 1980’s. Do you work on your craft as much now as you did in the early days of Artillery – and do you subscribe to the belief that you never stop learning when it comes to playing and songwriting?

Stützer: You can never in my opinion stop to learn new things. I still think we put new things in both the solos and the songwriting, in the way we put songs together. It’s never too late to learn anything new. We still keep on trying to do things, and I think on the next album we will try some new things as we’ve already got some new ideas. Hopefully that is going to work.

Dead Rhetoric: What are three albums that you believe shaped your outlook on heavy metal, and what are some of your favorite concert memories when you’ve had to chance to take in shows purely as an audience member?

Stützer: Oh… there have been so many. Some of the best shows I remember were Black Sabbath in 1977, with AC/DC as support. Metallica in 1984 was also a really good show. My first concert was Slade back in 1974, and that was also a big moment for me. That’s a tough one- I always try to think of ten albums and it’s difficult to get that done. Anything Black Sabbath has done- Metallica, Master of Puppets is still one of my all-time favorites. Exodus – Bonded by Blood. There are a lot of bands I could give you. I love music, I listen to music and have 4,000 CD’s plus a 1,000 vinyl albums. I have some rare vinyl from 70’s bands like Highway Robbery that are rare and really good.

Dead Rhetoric: Are you surprised by the renewed interest in thrash metal over the past 15 years – considering how much of a downturn things took in the 1990’s?

Stützer: Yeah, a bit in the 1990’s the music scene was boring and dark. Something happened when the new thrash movement came up and new bands like Evile, Havok came up. That pushed it, and people from the old scene are still coming to the shows and we have new people coming. Thrash metal is here to stay.

Dead Rhetoric: What are particular career highlight for Artillery that will stay with you forever?

Stützer: There are many. One of the first shows we did in Copenhagen was supporting Slayer and King Diamond. Some of our trips to South America and China. Playing in the United States, especially the Maryland Death Festival. That opened a lot of doors for us. Playing in Russia, also sharing a rehearsal room with both Mercyful Fate and Metallica when they were recording Ride the Lightning and Master of Puppets was a big thing for us. We can’t play enough…. We have played over 100 shows each of the last five years.

Dead Rhetoric: How do you see the rest of this year looking for Artillery in terms of promotion, touring, etc.? Would you be interested in putting together a documentary or live DVD/Blu-Ray in the foreseeable future?

Stützer: It’s funny you say that because we have already started to do it! We have already started the project, we’ve gotten the first mini-interviews with Mercyful Fate, Destruction, telling the story about us from the early days. Hopefully we will have that finished in this year. I look forward to that, the things we have done up to now. We will try to get some old things in there, it’s still early in the process. We want some good content clips. We will start Spain and Portugal with tour dates at the end of this week, then we will go to South America in May. We have already a European tour starting to be lined up in September, and I just talked to the guys from the United States to see if we can do something in October, go back there for 14 dates. There are a lot of festivals coming up to, and we are very satisfied with that.